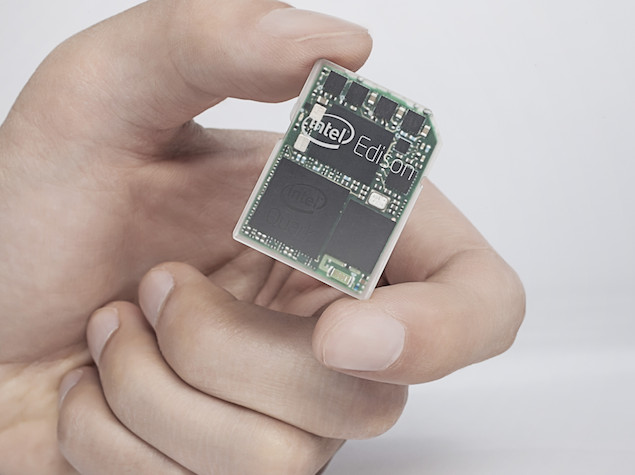 Intel has shown off an experimental product that it describes as a PC the size of an SD card, at the ongoing Consumer Electronics Show in Las Vegas.

The device called Edison is envisioned as a prototype to help drive the Internet of Things, referring to the coming wave of wearables, appliances and personal items that will have embedded sensors and persistent Internet connections to allow users to interact with them digitally. It is based on Intel's previously announced Quark SoC platform.

Edison is exactly the same size and shape as a standard SD card, contains a programmable X86-compatible processor core, NAND flash storage, and wireless connectivity via Wi-Fi and Bluetooth LE. It is fabricated on the company's 22-nm manufacturing process and is optimised for power-sensitive applications. Edison supports Linux amongst other operating systems, which Intel says helps developers create sophisticated user-facing applications.

Intel competes with ARM and its various licensees in an increasingly heated battle to dominate the emerging market for tiny, highly power efficient processors for a new generation of connected devices. The company announced its Quark platform at its annual developers' conference in September, and indicated that products based on it would be ready to ship by early 2015. Quark-based devices will be significantly smaller and less power-hungry than those based on the existing Atom line of microprocessors.

Intel CEO Brian Krzanich demonstrated an Edison device embedded into a baby's onesie, created by Rest Devices, a pioneer in technology-enabled parenting products including temperature sensors and sleep monitors. The Edison-enabled garment contains sensors and computing hardware, eliminating the need for an external receiver to notify parents of an infant's condition. Rest Devices also demonstrated a baby bottle warmer which can be activated remotely, automatically heating baby formula to a suitable temperature just as the baby begins to wake.

Intel also used the occasion to unveil a number of prototype wearable connected devices, including earbuds, a headset, a bracelet, and a charging "bowl" that makes it easy to keep multiple small devices charged.