Asus on Monday at its Computex 2017 event announced a range of laptops which will be going on sale this year. The new range of laptops announced at the annual Taipei event include the Asus ZenBook Flip S, which the company claims is the world's thinnest convertible laptop; ZenBook 3 Deluxe, claimed to be world's thinnest 14-inch laptop, and the ZenBook Pro, touted as the "thinnest and lightest" professional-grade ultraportable series. The company also announced its new VivoBook range of laptops including the Asus VivoBook S15, sporting a 15.6-inch display in a 14-inch chassis; and Asus VivoBook Pro 15, touted as the most powerful "VivoBook" ever.

The Asus ZenBook Flip S (UX370) sports a 360-degree flippable display and has a thickness of 10.9mm. The new convertible laptop weighs 1.1 kilograms. The company says that the new 360-degree ErgoLift hinge has a dual-action mechanism that can lift and tilt the keyboard into the typing position even when the display is opened beyond 135 degrees.

The ZenBook Flip S is powered by up to seventh-generation Intel Core i7-7500U processor and offers up to 1TB PCIe SSD. The laptop also features the company's new cooling system that uses a liquid-crystal-polymer fan. It sports a 4K UHD multi-touch NanoEdge display and supports an active stylus. The Asus ZenBook Flip S also comes with a fingerprint sensor which provides instant one-touch login via Windows Hello in either laptop or tablet mode.

The Asus ZenBook Pro (UX550) is being touted as the "thinnest, lightest and most powerful ZenBook Pro ever." It packs seventh-generation quad-core Intel Core i7-7700HQ processor coupled with Nvidia GeForce GTX1050 Ti graphics. It also comes with a 1TB PCIe x4 SSD and 16GB DDR4 RAM. Asus claims an incredible day-long battery life of up to 14 hours on the ZenBook Pro. It features a 15.6-inch 4K UHD NanoEdge display and also packs quad-speaker powered by Harman Kardon. 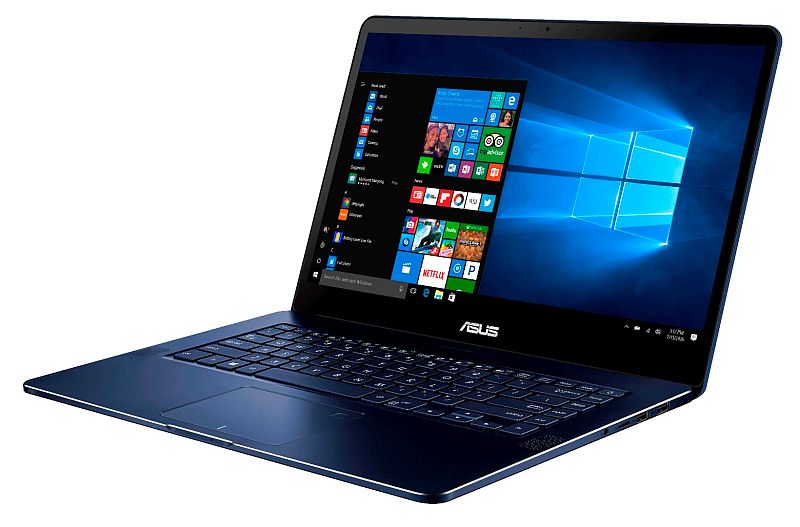 The Asus ZenBook 3 Deluxe (UX490) features a 12.9mm-thin chassis and weighs in at 1.1 kilograms. The laptop features a 14-inch NanoEdge display and is powered by seventh-generation Intel Core i7-7500U processor with up to 16GB of 2133MHz LPDDR3 RAM, and a 1TB PCIe SSD. The laptop packs two USB Type-C ports which are Thunderbolt 3-enabled with support for 40Gbps data transfers and dual 4K UHD external displays. It comes with Windows 10 and comes equipped with a fingerprint sensor for easy one-touch login with Windows Hello.

The Asus VivoBook Pro 15 (N580) features a 15.6-inch 4K UHD (3840x2160 pixels) display with wide-view technology. The Windows 10-powered laptop comes with a seventh-generation Intel Core i7-7700HQ quad-core processor with up to 16GB DDR4 RAM and NVIDIA GeForce GTX 1050 graphics. The VivoBook Pro 15 features hybrid storage with up to a 2TB HDD and a 512GB SSD. Asus touts that the dual-fan cooling system with a dual-copper thermal module and heat pipes will ensure the VivoBook Pro 15 to stay cool during intense gaming sessions or under heavy loads. It features Harman Kardon-certified audio with twin speakers and also has a fingerprint sensor for one-touch login via Windows Hello. The device features support for Asus Pen.

Lastly, the Asus VivoBook S15 (S510) features a 15.6-inch display and Asus says has been designed for those constantly on the go. It comes with a 17.9mm thin profile and weighs just 1.5 kilograms. The laptop sports an Icicle Gold finish with a NanoEdge display. The laptop is powered by the seventh-generation Intel Core i7-7500U processor with up to 16GB DDR4 RAM and Nvidia GeForce 940MX graphics.