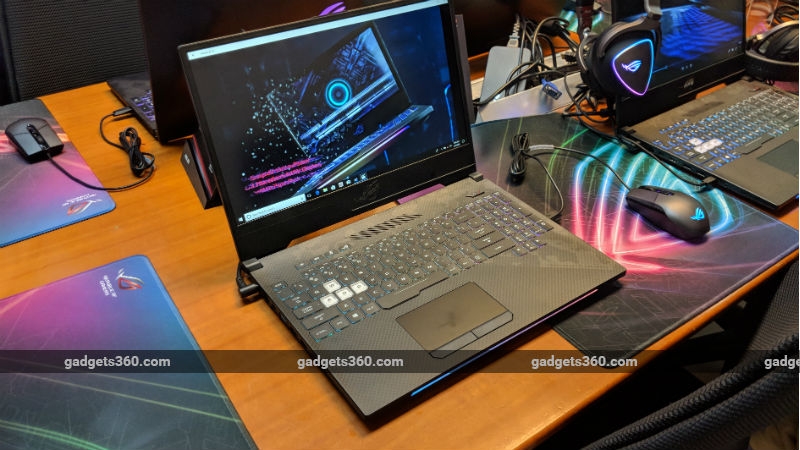 One of the key highlights of the event was ROG Rapture GT-AX11000, which is said to be capable of delivering wireless speeds of up to 11,000Mbps. ROG Ryujin and ROG Ryuo are the first CPU coolers from Asus Republic of Gamers and said to be the world's first liquid coolers with an embedded 1.77-inch LiveDash colour OLED display. Marking another entry into a new product line is ROG Thor 1200W Platinum, which is a 1,200-watt power supply with an IP5X-certified 14mm wing-blade fan and Aura Sync. Finally, the ROG Strix SCAR II and Hero II have been said to come with world's first 144Hz super narrow bezel display with an ultrafast 3ms gray-to-gray (GTG) response time.

Asus Chairman, Jonney Shih, during the event, said, "Today is a celebration of those who dare to be different. Twelve years ago, ROG was founded out of our desire to create a full lineup of ultimate gear designed for gaming victory. Now, through the dedication of ROG engineers, designers, professional gamers and enthusiasts around the world, we have achieved these goals and distilled them into the essence of ROG. We will carry this spirit forward as we strive to create the next generation of gaming innovations."

Asus says both the ROG Strix Scar II and Hero II feature the world's first 144Hz super-narrow-bezel display with an 3ms gray-to-gray (GTG) response time, a HyperStrike Pro gaming keyboard for improved control, and HyperCool Pro technology to cool the CPU and GPU. They are also the world's first laptop to feature multi-antenna Wi-Fi for improved connectivity, the company claims.

Asus ROG Rapture GT-AX11000
The ROG Rapture GT-AX11000 is being touted as the world's first 10 Gigabit Wi-Fi router. It comes with support for the latest 802.11ax Wi-Fi standard, and delivers 2.53 times higher data rates than other 802.11ac 4x4 routers, Asus claims. Also, the OFDMA support in the 802.11ax Wi-Fi standard enables several devices to be bundled together in each channel that increases the network efficiency by 4 times and reduces latency as well.

Asus says the ROG Rapture GT-AX11000 provides triple-level game acceleration to boost game traffic from the device to game server. It has a 2.5 Gigabit gaming port that prioritises the device connected to it with 2.5 times faster transmit speeds.

A physical button built into the router allows users to turn on and off Game Boost mode for prioritising gaming traffic on the network without the need to use a web interface or mobile app. It can also activate the DFS band. Gamers Private Network (GPN) support ensures the shortest connection route between the user's home network and the game server, for the lowest ping times and latency.

Asus ROG Ryujin 360/240 CPU Coolers
The Asus ROG Ryujin is claimed to be the first ROG AIO cooler and the world's first cooler with an OLED display. It sports a 1.77-inch LiveDash colour OLED that shows real-time system stats and personalised images and GIFs.

Asus ROG Balteus Qi
The ROG Balteus Qi is an RGB gaming mouse pad that combines a performance surface with the convenience of Qi wireless charging on the desktop. It has a 370x320mm surface that offers an area for charging and gaming simultaneously. It features 15 individually customisable Aura Sync RGB lighting zones for personalisation. The mouse pad is also equipped with an on-pad lighting mode button and a USB 2.0 passthrough port. Apart from ROG Balteus Qi, its sibling the Balteus will come without the wireless charging function.

Asus ROG Gladius II Wireless
ROG Gladius II Wireless is an optical gaming mouse. It offers dual wireless connectivity. Its movements are tracked by the 16000dpi sensor and those are translated to the screen via 1ms 2.4GHz or low-latency Bluetooth wireless connectivity. Asus says that the mouse features ergonomic contours to ensure comfort in the hand, and an ROG-exclusive socket design. It is powered by Aura Sync RGB lighting.

Asus ROG Strix Gaming Chassis
The ROG Strix is designed with aluminium and smoked glass and comes with AURA Sync lighting technology. The ROG Strix Chassis features an ergonomic woven-pattern handle for easier transportation. The company says it is ideal for an EATX motherboard and offers liquid cooling upgradeability with dual 360mm radiators on the top and front of the case.