Asus Chromebox launched in US at $179 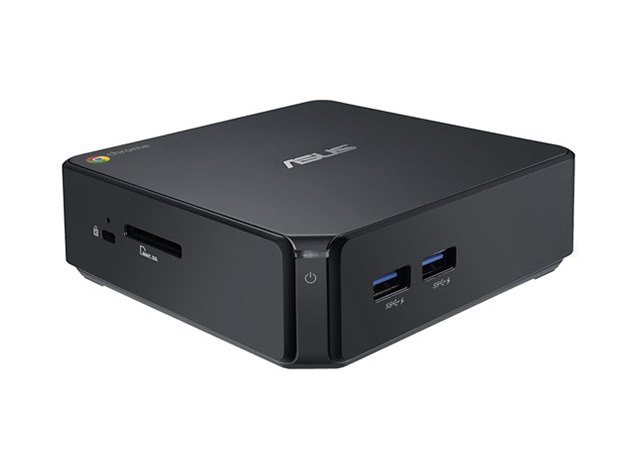 Asus has announced the launch of the Asus Chromebox, the desktop incarnation of a Chromebook. The device has all the capabilities of a Chromebook, but is designed to be used with a desktop monitor, keyboard and mouse. The device will cost $179 onwards (approximately Rs. 11,179).

The Chromebox is roughly the size and weight of ultracompact PCs such as Intel's NUC and Zotac's Zbox nano series, but only runs Google's browser-centric Chrome OS. The entry-level model is based on an Intel Celeron 2955U processor, which is essentially a fourth-generation, low-voltage, dual-core mobile model running at 1.4GHz with integrated Intel HD graphics, but no Hyper-Threading or Turbo Boost. There's 2GB of RAM and 16GB of local storage in the form of an SSD. Connectivity is taken care of with Wi-Fi a/b/g/n and Gigabit Ethernet. The Chromebox also has four USB 3.0 ports, an SD card reader, 3.5mm headset jack and HDMI as well as DisplayPort outputs.

The Celeron CPU does not require a fan for cooling, and as a result the Chromebox should run almost completely silent. There will also be variants built around low-voltage Intel Core i3 and i7 processors with up to 4GB of RAM. Asus doesn't suggest what sort of Web applications might make use of a Core i7 CPU, although it does say that the Core i3 is needed for 4K video playback.

All three models will come with 100GB of Google Drive space for an unspecified "limited" time.

The Asus Chromebox will most likely replace Samsung's Chromebox which was launched in 2012 and refreshed in 2013. Samsung's current model is based on an older Intel Celeron B840, and starts at $329.99 (approximately Rs. 20,608).

Google's Chrome OS is seeing wider adoption by more and more manufacturers, and is rapidly making inroads into the education sector. Earlier this month, Lenovo unveiled a version of its ThinkPad Yoga 11, dubbed the 11e Chromebook, which runs ChromeOS and has a starting price of $349 (approximately Rs. 21,786). The Yoga is the first convertible touchscreen hybrid based on Google's OS.