Armed with $1.5 billion, HP CEO on the prowl for acquisitions 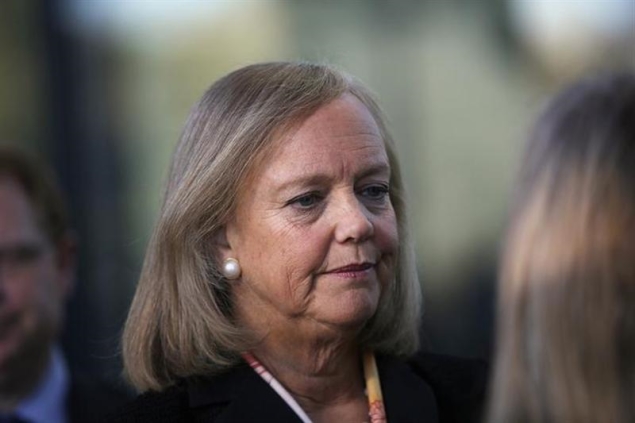 Hewlett-Packard Co is back in the market for acquisitions of up to $1.5 billion, Chief Executive Meg Whitman said in a televised interview on Thursday, aiming for smaller deals after a flurry of outsized purchases in past years.

Whitman, speaking a day after she switched out the chief of the company's Enterprise group and said HP's second-largest unit had fallen down on sales and product execution, told business channel CNBC the company could also do deals in the $100 million to $300 million range.

"We have our eye on a number of areas," the executive said in the interview. Whitman did not elaborate on specific targets but explained how the company could use acquisitions.

"Acquisitions will become part of our future, to further some of our strategic initiatives and shore up some of the product holes," she said.

"We don't need a five or six billion dollar acquisition. I think there are acquisitions in the $100 million, $300 million range, maybe some up to 1 to $1.5 billion that we might be interested in."

She also ruled out the idea of breaking up HP or selling assets.

"We're the only company that can go from devices to infrastructure to services to software and this is a huge point of difference," she said. "There's a lot to be said for HP today and we aim to prove that."

Bad deal legecy
HP has built a business serving corporations' hardware and software needs primarily through a series of purchases costing at least $1 billion over the past few years. It bought outsourcing firm Electronic Data Systems in 2008; 3Com in 2009; smartphone maker Palm, 3PAR and security software maker ArcSight in 2010; and big-data analytics firm Autonomy in 2011.

(Also see: HP to pay $10B for Autonomy as it exits mobile)

On Wednesday, Whitman told analysts during the company's earnings conference call that the process of digesting or integrating the mega-deals of past years had been inconsistent.

And not all of HP's deals have turned out well. The company has had to write down much of the value of EDS and Autonomy, which it accused of shoddy accounting last year.

"We will be incredibly measured and disciplined. We are very mindful of the event that we just came off with Autonomy, so don't worry about that," she said on the conference call. "As we see these big tectonic plate shifts, there's no question that acquisitions are going to have to be a part of how we turn this Company around."

Shares in the world's largest PC maker dived 12 percent on Thursday as investors fretted about sliding margins which suggest the company is cutting prices to try and drive sales and an increasingly uncertain outlook for the coming year.

The "results worrisomely appear to suggest that it is 'pushing on a string,'" said Bernstein analyst Toni Sacconaghi.

"The company should have benefited from strong cost savings but appears to have reinvested the savings in being incrementally more price aggressive this quarter, and yet, seems to have little to show for it."

HP reported disappointing quarterly results particularly in the Enterprise Group, which curtailed its outlook for 2014. As a consequence, COO Bill Veghte replaced rising star Dave Donatelli at the head of that division.

Donatelli, credited for leading the acquisitions of 3Com and 3PAR that helped launch HP into the networking and storage markets, is now tasked with seeking out early-stage technologies for acquisition.

"While we are neutral on the choices to run the new businesses, we are worried that HP needs outside ideas to turn around businesses that have been continually ceding share," Sacconaghi wrote in a research note on Thursday.