Share on Facebook Tweet Snapchat Share Reddit Email Comment
Apple finally took the wraps off its much-anticipated new ultra-thin notebook, which is not only its thinnest and lightest MacBook model yet, but is also its first fanless Mac. The new MacBook weighs 0.91kg and is 13.1mm thin, making it 24 percent slimmer than even the 11-inch MacBook Air. Apple developed an all-new aluminium unibody and designed all its components from the ground up.

The new MacBook is powered by Intel Core M processors, based on Intel's fifth-generation low-power Broadwell architecture. It features a 12-inch Retina-class screen with a resolution of 2304x1440 pixels. The screen is 0.88mm thin and uses 30 percent less energy than the screens on previous models to deliver the same levels of brightness.

One of the most dramatic changes is that Apple has dispensed with nearly all physical connectors except a single USB Type-C port which will have to do for charging and connecting peripherals. The port allows for 5Gbps USB 3.1 data transfers and DisplayPort video output. Adapters will be needed for all current standards.

Apple also created a new butterfly keyboard switch mechanism which is 40 percent thinner than the scissor switches used in most keyboards today, but is also more stable. The keys are full-sized and each keycap features its own LED for even backlighting. Along with the keyboard is a new Force Touch trackpad which does not click physically, but delivers haptic vibration feedback. A new "Force Click" gesture detects how hard a person is pressing down on the trackpad in order to trigger alternative functions such as file previews and word definition lookups.

A new "terraced" battery design fits into the contours of the milled unibody, delivering up to 35 percent greater capacity in the same amount of space. Apple claims 9 hours of wireless Web browsing or 10 hours of movie playback. The new MacBook's body does not require fan vents, and the machine runs completely silently. 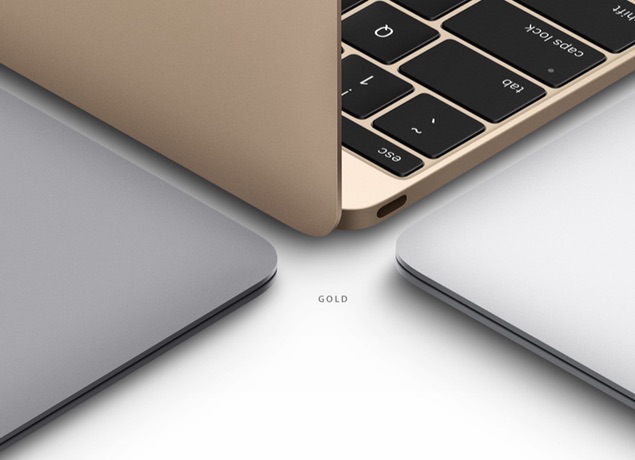