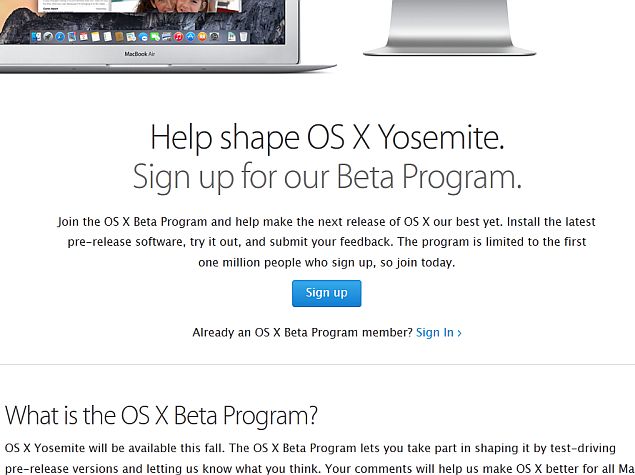 While Apple's brand new OS X Yosemite is immediately available for developers as a beta programme, it will also be available for general users at a later date, if they sign up for the limited public beta.

However, Apple's OS X Yosemite sign-up page states that the public beta version of the OS would be only available to the first 1 million users. "Join the OS X Beta Program and help make the next release of OS X our best yet. Install the latest pre-release software, try it out, and submit your feedback. The program is limited to the first one million people who sign up, so join today," states the page. The OS's final version will arrive later this year.

Interested users would have to sign-up via their Apple IDs and wait for a redemption code, which will let them download OS X Yosemite Beta from the Mac App Store. Apple has not yet revealed when the public beta will be available for download.

When facing any issues while using the OS' beta version, users can directly provide a feedback to Apple via the built-in Feedback Assistant application.

Additionally, OS X Yosemite will only work if the user already has OS X Mavericks installed. To be on the safer side, Apple has also highlighted that users should install the new OS in a secondary Mac as the OS is still inaccurate and unfinished. Features like phone calls, SMS, Handoff, Instant Hotspot, and iCloud Drive, will not be present in the Beta version.

"Some applications and services may not work properly with the beta software. If you are using iCloud Documents on Mavericks and you are also a member of the iOS Developer program, your documents will not sync across your other Macs and iOS devices," adds Apple.