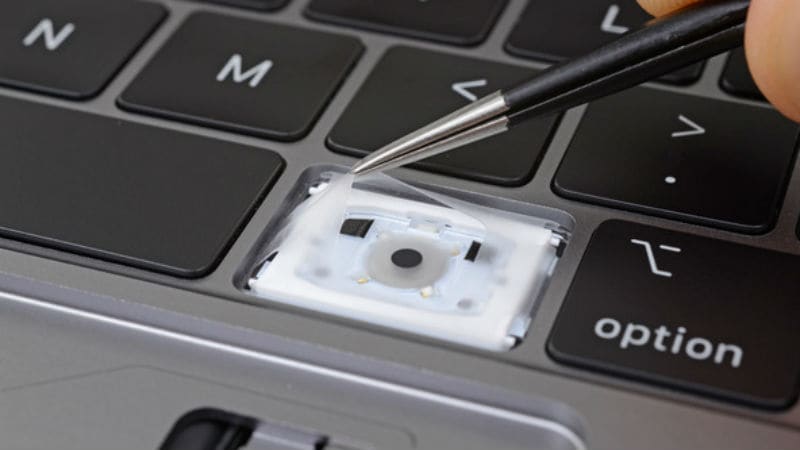 Apple appears to have finally taken some major action on the notorious Butterfly-switch keyboard in the MacBook Pro laptops. Earlier this week, the Cupertino giant updated its MacBook Pro lineup, with new 13-inch and 15-inch Touch Bar models. Notably, the new MacBook Pro models also come with an "improved third-generation keyboard for quieter typing", and are expected to have solved the dust issue affecting the earlier Butterfly switch design. Even though Apple didn't explicitly address the subject in a release announcing the new launches, the DIY repair authority iFixit has evidence that Apple may have actually quietly addressed the issue. As it turns out, the keyboard in the new MacBook Pro models features a thin silicone membrane on top that seems purposefully designed to shield the mechanical parts from dust.

The iFixit team claims that the new MacBook Pro keyboards use a silicone membrane underneath every key to keep away dust particles from finding their way inside and jamming it up. The team dismantles a 15-inch MacBook Pro to find out the new mechanism. Interestingly, Apple has a patent for this technology, called 'Ingress Protection for Keyboards', designed to "prevent and/ or alleviate contaminant ingress."

As per the patent application, the gasket would comprise of a layer that would act as a membrane to block dust particles. iFixit now says that's what the new MacBook Pro keyboard contains, and that the sound of the keyboard is quieter as a side effect of the silicone membrane.

There is no clarity on whether the new method discovered in Apple MacBook Pro keyboards is an effective solution to the issue we have been hearing for a while now. With lawsuits filed and a service program for older computers in place, Apple has enough reasons to update its MacBook Pro keyboards, but only time will tell if these new keys are actually reliable.