While the new MacBook Air has just hit stores, folks at iFixit have come up with their teardown coverage to show the repairability of the new MacBook model. The teardown highlights that the MacBook Air 2018 has a Butterfly-switch keyboard similar to the new MacBook Pro - with a thin silicone barrier to resist dust to some extent. It has also been spotted that a "radiator-esque" heat sink is available alongside a lone fan to deliver a manage thermal dispense. The latest model hasn't received a remarkable repairability score majorly due to non-serviceable, non-upgradable storage and RAM. However, it is touted to have a bunch of modular components that have easy access.

As per the teardown coverage by iFixit, the lower case of the new MacBook Air provides access to its logic board, single fan, a pair of speakers, and the heat sink. The team also found that all the ports and associated boards on the new MacBook model are easy replaceable since the available ports sit on their boards. Further, the battery pack is easier to remove over what's available on the latest MacBook Pro models.

The newer MacBook Pro models have "first-step replaceable" trackpads, but the latest MacBook Air model has a trackpad with a cable shared with the keyboard, which is attached to the logic board. This restricts trackpad repairs to some extent as the logic board needs to be removed first to replace the trackpad. 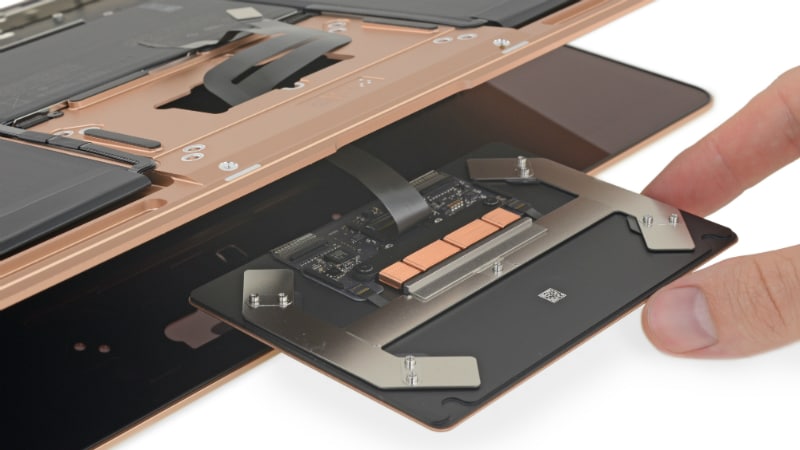 On the keyboard front, the iFixit team saw that the third-generation Butterfly keyboard on the MacBook Air 2018 is similar to the keyboard available on the recent MacBook Pro models. There is an ingress-resisting silicone covering on top of each keyboard switches. Also, the Touch ID sensor on the new MacBook Air, which is one of its key highlights, comes as a modular - secured on the board with Torx screws. This means the sensor can be replaced easily after removing the smaller audio board.

"Featuring modular ports and pull-to-release adhesive, the new MacBook Air stands out against a trend of declining repairability in Apple's laptops," the iFixit team notes in its teardown coverage.

Having said that, due to non-upgradable RAM and storage and the hard-to-repair keyboard that is integrated into the top case, the team has given a repairability score of 3 out of 10 to the new MacBook Air. This is notably higher than the scores achieved by the MacBook Pro 2018 and 2017 MacBook.