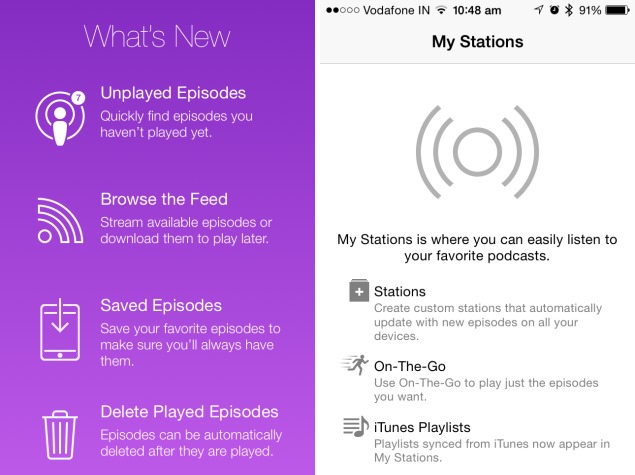 Apple has released iTunes 11.2 for Windows and OS X as well as an update to the Podcasts app for iOS. The updates come after Apple dramatically overhauled the user interfaces of both apps in the recent past, and are aimed at improving the user experience for podcasts, which remains an underused feature.

New functionality across the desktop and mobile Podcasts interfaces comes in the form of a dedicated section for unplayed episodes, allowing users to more easily discover content they might have been missing.

iTunes 11.2 also reintroduces the ability for iPhone users to sync contacts and calendars via USB, a feature that had been dropped in earlier versions. Apple also notes that the release should improve general stability and performance.

In the iOS app, new episodes of podcasts a user has subscribed to will appear in a new 'Feed' section, from where he or she can download them. Episodes can now be deleted automatically after being played, which should help users running out of space on their iPhones or iPods.

Web links that appear in podcast descriptions can now be tapped to open them in Safari, and links to specific podcasts can be shared via AirDrop. CarPlay support will allow users to control the app via steering-mounted controls or a central touchscreen console in cars that support Apple's in-car interface.

Users can now also control podcast playback via Siri, which includes requesting specific podcasts by name. The extension of Siri's capabilities without a core iOS update points to the ability for third-party apps to integrate with Apple's voice-based "intelligent assistant".
Comments

Google Works on Tool to Remove Links
Samsung Ties-Up With Vodafone, Aircel for Operator Billing on Its Apps Store