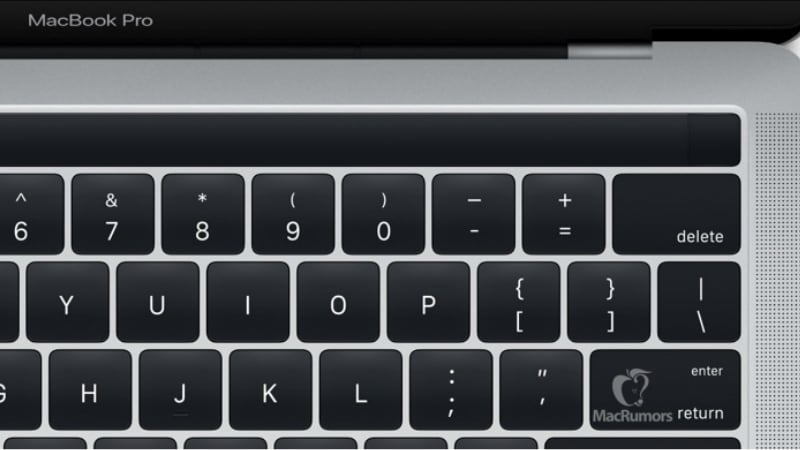 With the commercial release of macOS 10.12.1 Sierra on Monday, Apple has erroneously leaked images of the upcoming MacBook Pro in the new version of the operating system - just ahead of its launch event on Thursday. The images confirm the arrival of the rumoured Magic Toolbar OLED touch panel expected to replace the function keys on the keyboard. The entire MacBook lineup is also likely to be refreshed on Thursday.

These hidden Apple Pay images were found by a MacRumors reader, and they demo how users will now be able to pay using their fingerprint on the OLED panel, confirming Touch ID integration as well. The Magic Toolbar is expected to let users perform tasks quickly based on what they are browsing on the screen.

In these photos, the Touch ID is placed right where the power button used to be. It is seamlessly integrated right next to the Oled screen and is hardly visible. The images also reveal that the speakers are situated at both ends of the keyboard on the new MacBook Pro.

Furthermore, the resource files of macOS Sierra 10.12.1 also have additional images, reports 9to5Mac, related to Touch ID - and the inclusion further cements its arrival. The padlock and circular images below hint that the Touch ID sensor can be used for unlocking the device, apart from making payments as well.

The MacBook Pro is expected to be the most significant upgrade among the entire Mac lineup. It is said to be lighter and thinner than its predecessor, and also be powered by Intel's Skylake generation processors with up to 2TB SSD storage. The laptops are also supposed to offer improved display quality and energy efficiency, and are rumoured to come with a "MagSafe-like adapter". While previous rumours indicated a new 13-inch MacBook Air with USB Type-C port, new iMacs and a fresh 5K display are also expected to be unveiled at the event, more recent reports indicate something else.

KGI Securities analyst Ming-Chi Kuo said apart from MacBook Pro, Kuo believes the 13-inch MacBook will make appearance, with improvements over to the current 12-inch MacBook. He however does not mention a refreshed MacBook Air lineup, and adds the new iMac models may not be revealed until next year - alongside the standalone 5K display .