AMD at Computex 2016 has unveiled its 7th generation laptop processors. Apart from two FX-Series APUs, the company introduced seven new APUs in its A-Series and E-Series. The chipmaker also unveiled the Radeon RX480 graphics card based on its Polaris architecture - the card is VR ready, AMD says, and has an suggested retail price of just $199 - seriously lowering the price bar for PC users to correctly enjoy virtual reality. AMD's upcoming Zen-based Summit Ridge processors were also partially detailed at the event.

Starting with the new AMD APU SKUs - they are based on a new version of the Excavator core first seen in the Carrizo SoCs, called the Excavator mk2 - still based on the 28nm fabrication process. AMD has divided the new SKUs into entry-level notebook and mainstream notebook offerings - Stoney Ridge and Bristol Ridge respectively. The chipmaker says Stoney Ridge offers 52 percent faster performance than the previous generation of entry-level mobile chips from the company, and Bristol Ridge offers 56 percent faster performance than its Carrizo counterparts.

The nine new APUs all support DDR4 memory, but in dual-channel form only. All the APUs also fit on the Carrizo's FM2+ socket, meaning OEMs will not have to use new motherboards for refreshed laptop models.

Coming to the new AMD Radeon RX480 VR-ready GPU - the graphics card will be available in 4GB and 8GB of GDDR5 memory variants, and the first cards from AMD partners based on the GPU will hit stores on June 29. At least one of the variants will be HTC Vive Ready and Oculus Rift certified. 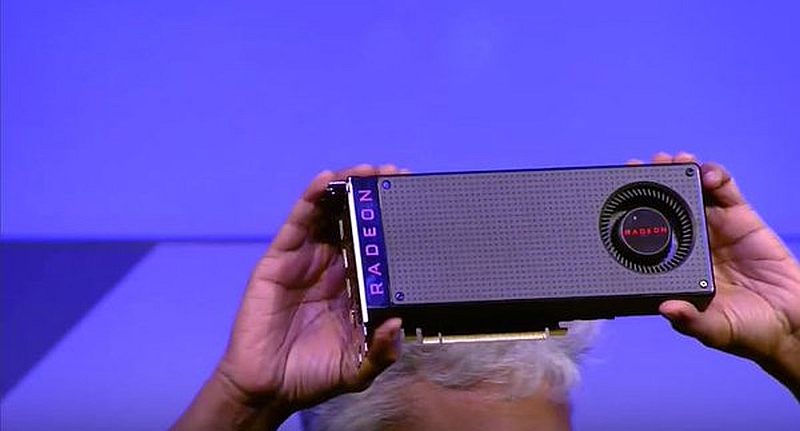 The card is based on the Global Foundries 14nm FinFET fabrication process. While AMD has not yet detailed which specific Polaris GPU it is using on the Radeon RX480, Anandtech speculates it to be the Polaris 10. It is based on the Graphics Core Next 4.0 (GCN 4.0) architecture.

As for specifications, the AMD Radeon RX480 comes with 2304 stream processors (allocated in 36 CUs), while AMD has not detailed the number of texture units, ROPs, or transistor count. It is said to deliver over 5 teraflops of performance, feature a boost clock over 1.08GHz, sport an 8Gbps memory clock and 256-bit memory bandwidth, and offer a TDP of 150W. The GPU supports HDMI 2.0a, DisplayPort 1.3/1.4, as well as AMD's Freesync technology.

Finally, we get to the few new details about AMD's upcoming Zen architecture based Summit Ridge generation of processors, which will use the new AM4 desktop socket. The company at the event showcased an early sample of an 8-core Zen-based CPU. The first samples will be rolled out to select partners in a few weeks. Wider availability will take place in Q3 2016, though the retail launch was not detailed.

Further reading: AMD, AMD Radeon, AMD Radeon RX480, APU, Bristol Ridge, CPU, Computex, GPU, Gaming, Graphics Card, Laptops, SoC, Stoney Ridge, laptop processor, processor
Abhinav Lal Email Abhinav
Abhinav Lal is News Editor at Gadgets 360 and has been tracking all things tech for over a decade now. He has written extensively on a range of topics including apps, gaming, mobiles, PCs, and Web services in his tech journalism career. Apart from editing news, he also works on reviews and features, while taking care of the product side of things at Gadgets 360. Write to him at abhinavl@ndtv.com or get in touch on Twitter. You will most likely find Abhinav editing stuff for Gadgets 360, ...More
India's Mobile Data Traffic to Grow 15-Fold by 2021: Report
Hitman: Episode 3 - Marrakesh Review