This year has seen AMD update its entire CPU product stack with launch after launch, targeting everyone from entry-level users with the Ryzen 3 series to hard-core enthusiasts with Ryzen Threadripper, and data centre customers with Epyc. Now, the company is fulfilling its promise to launch laptop APUs, or Accelerated Processing Units with integrated graphics, before the end of 2017. AMD is calling its latest launch the "world's fastest processor for ultrathin notebooks", which is a tall claim, as these processors will have to go up against Intel's brand new 8th Generation Core lineup.

While Intel's 8th Gen Core i7-8550U might have a slight edge over the Ryzen 7 2700U in Cinebench R15's single-threaded test with scores of 159 and 144 respectively, the multi-threaded test gives AMD a significant advantage, with a huge lead of 719 points compared to 498. AMD also shows performance leads over Intel in POVRay, PCMark 10 and TrueCrypt, but not in PassMark. When it comes to graphics performance, AMD claims that its Ryzen 7 2700U APU alone outperforms an Intel Core i7-7500U with an Nvidia GeForce 950M GPU by 915 points to 900 in 3DMark Time Spy. 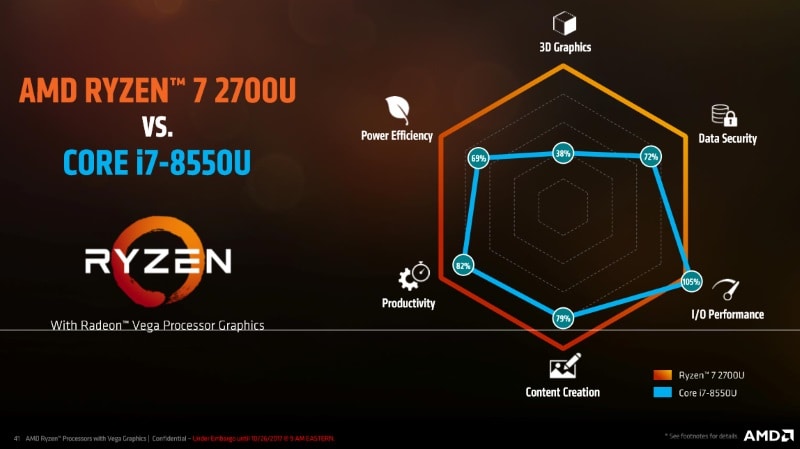 AMD also claims playable framerates in an ultrathin notebook form factor. Users can expect to run League of Legends, DOTA 2 and CS:GO at 1920x1080, and Overwatch and Quake Champions at 1280x720, and still get between 43fps and 66fps depending on the quality settings used. Moreover, 4K streaming is supported by Amazon, Vudu and Netflix. HDR and Freesync 2 are supported on both internal and external displays.

Both processors have 6MB last-level caches and are configured to run within a 15W TDP envelope, though notebook manufacturers can reconfigure this down to 12W or up to 25W to suit their designs. Dual-channel DDR4-2400 RAM is supported. AMD has worked on optimising power delivery to the CPU and GPU logic on the chip, and can trade off power between CPU cores as well as GPU compute units opportunistically, depending on load and operating conditions. 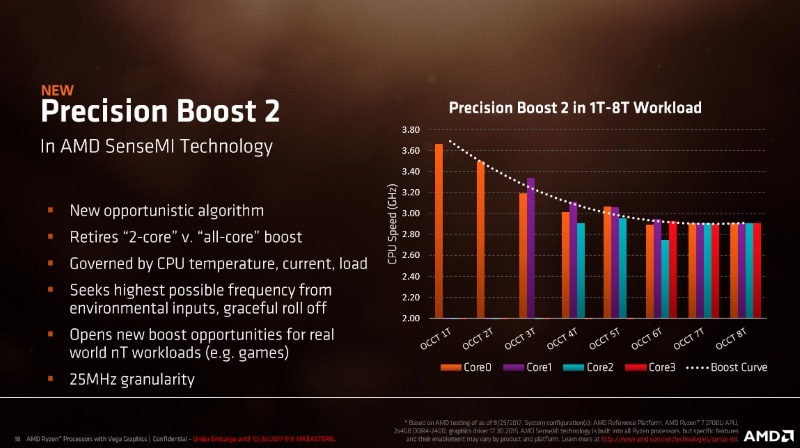 The Zen CPU cores and Vega GPU compute units are all designed around AMD's Infinity Fabric, the interconnect technology that was announced as one of AMD's Zen architecture features, and is used across AMD's 2017 product stack. It unifies data and control connections between the CPU cores, GPU, IO hub, DDR4 RAM controllers, and other onboard logic. It also enables AMD's SenseMI feature, using thousands of embedded sensors to monitor CPU speed, power consumption, voltage, and temperature in real-time.