AMD is announcing a number of new products at CES 2018, building on the momentum it worked up in 2017 with its all-new Ryzen, Threadripper and Epyc CPUs, Radeon RX Vega GPUs, and semi-custom designs for products such as the Xbox One X. The company hopes to continue pushing into the consumer and enterprise markets and is also hoping to capitalise on demand in the high-performance computing, machine learning, VR and mixed reality spaces.

Those models will be followed by the second-gen Ryzen, Ryzen Pro and Threadripper CPUs later in the year. Second-generation Ryzen CPUs using the 'Zen+' architecture and a 12nm manufacturing process are already being sampled and will begin shipping in April 2018. The process shrink will result in a 10 percent performance improvement. 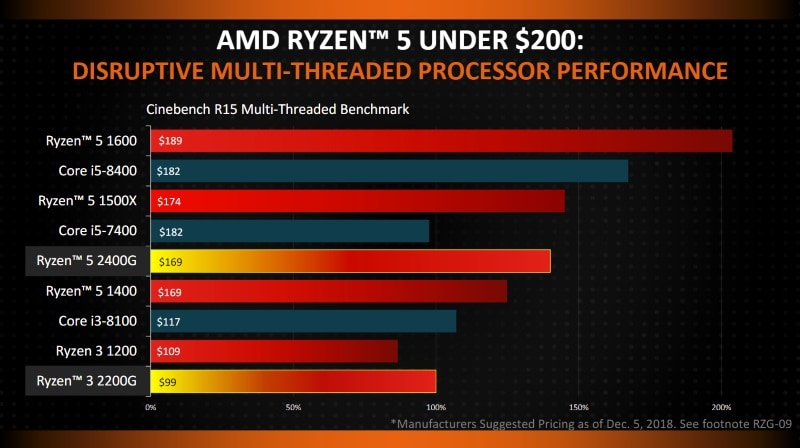 Most of the existing CPU models have received price cuts ranging from $15 to $150, which should put even more pressure on Intel. All newly announced desktop CPUs will use the same socket AM4 as the first-generation Ryzen models, but specific motherboard compatibility will depend on the presence of video outputs for the onboard graphics. AMD has also announced its next-generation X470 desktop chipset, promising better power efficiency and launching in April 2018. Finally, AMD unveiled a quiet new cooler, the Wraith Prism, which features direct-contact heat pipes, an RGB LED ring, and illuminated fan blades.

New mobile APUs will build on the two models AMD launched last year. The company claims up to 175 percent and 128 percent better CPU and GPU performance compared to its own previous-generation APUs, along with 58 percent lower power consumption. Complementing the existing Ryzen 7 2700U and Ryzen 5 2500U are the new Ryzen 3 2300U and Ryzen 3 2200U, both expected to appear in laptops shipping this quarter. While the Ryzen 3 2300U has four cores without multi-threading and six Vega compute units, the Ryzen 3 2200U will be a dual-core, four-threaded part with three Vega CUs. Both have 3.4GHz base speeds but the former can boost up to 2GHz while the latter can manage 2.5GHz under load. Both are aimed at ultrathin laptops and 2-in-1s. 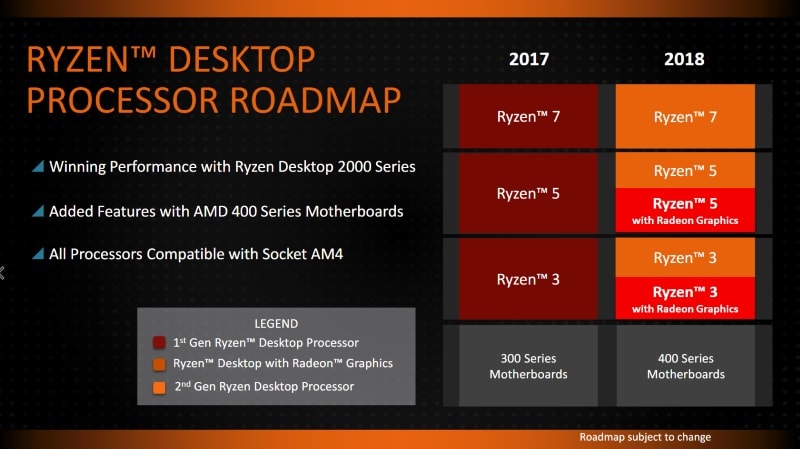 Looking further into the future, AMD confirmed that Zen 2 will be manufactured using a 7nm process, and its design is complete. Beyond that, Zen 3 will be an optimisation at 7nm+. Both are scheduled to ship before 2020 though more specific timeframes were not announced.

On the graphics side, AMD's 2018 roadmap will include mobile Radeon Vega GPUs aimed at ultra-thin gaming and professional laptops. The Vega architecture will shrink to 7nm and then be replaced by Navi, also at 7nm. AMD has plotted one more architecture refresh before 2020, though again without any firm launch targets. A new Radeon Instinct MI25 accelerator for machine learning applications will be AMD's first 7nm chip. It will be ready to sample in 2018 and ship next year.

AMD CTO Mark Papermaster also acknowledged the massive Meltdown and Spectre CPU vulnerabilities that have been confirmed to affect not only Intel chips but also those designed by ARM, Apple, Qualcomm, and AMD. According to him, the vulnerability that affects all vendors will be fully addressed by software and OS patches, and AMD's architecture is immune to another form of attack that has come to light on other companies' processors.