While AMD's higher-end offerings offered significant performance and value benefits in many situations compared to Intel's equivalent processors, the low-end Ryzen models suffered because the need for a discrete graphics card pushed up the overall cost of a new PC. AMD is now replacing its most affordable Ryzen 3 1200 CPU with the new Ryzen 3 2400G, which is officially priced at Rs. 7,290 (plus 18 percent GST) in India. The Ryzen 5 2400G replaces the Ryzen 5 1400 in AMD's product stack, and is priced at Rs. 10,990 (plus 18 percent GST).

The Ryzen 3 2200G has four physical cores without multi-threading, a base speed of 3.5GHz, and a boost speed of 3.7GHz. The Ryzen 3 2400G also has four cores but multi-threading is enabled allowing for eight threads. The base speed is 3.6GHz while the boost speed is 3.9GHz. In terms of graphics capabilities, the Ryzen 3 2200G has eight Radeon Vega compute units running at 1100MHz, while the Ryzen 5 2400G has eleven running at 1250MHz. Both models have 4MB of L3 cache, and officially support up to DDR4-2933 RAM. Both also have 65W TDP ratings and come with AMD's Wraith Stealth cooler in the box. As with all Ryzen CPUs, these new models are unlocked and overclockable. 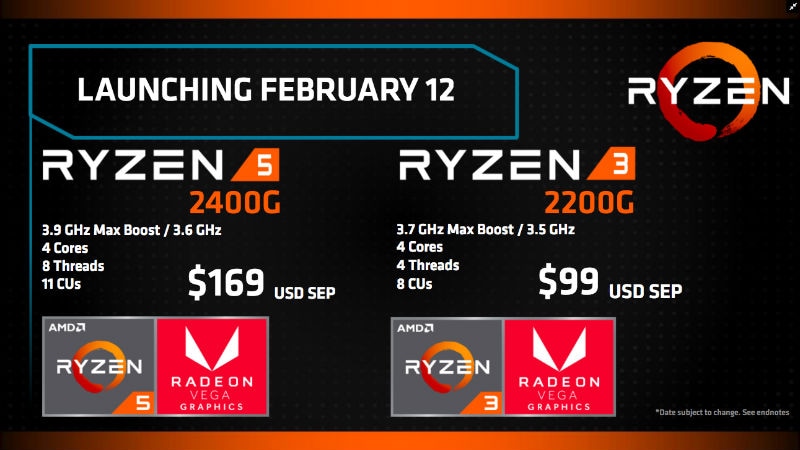 The company says that it has been able to leverage improvements to its foundry partner's 14nm fabrication technology, allowing it to drive higher frequencies within the same voltage and temperature limits. There have also been improvements to the speed and latency of the cache memory, which should lead to better responsiveness in certain applications. The Precision Boost feature has also been updated to version 2.0. This uses AMD's multiple sensors embedded through the Infinity Fabric interconnect of each CPU to adjust frequency dynamically as workloads change. The company now says that Precision Boost 2 is even more fine-grained and allows more cores to run at higher speeds more often. 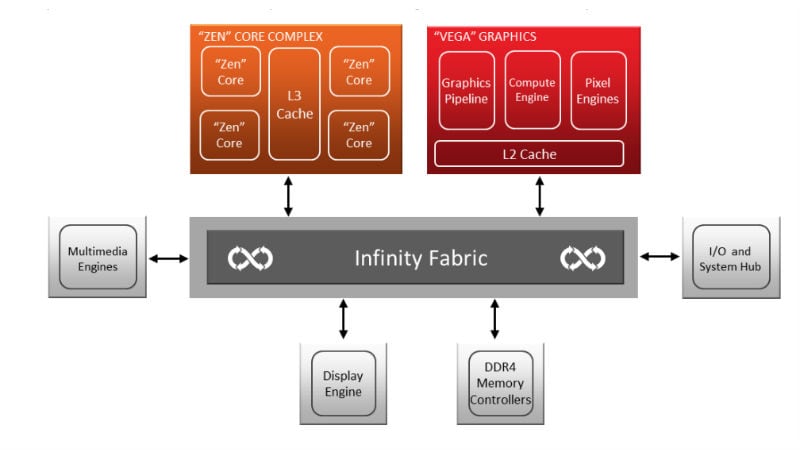 With the Ryzen 5 2400G in particular, AMD claims performance equal to that of an Intel Core i5-8400 CPU with an Nvidia GeForce GT 1030 GPU, at a much lower price. Graphics performance is purportedly 156 percent better than Intel's integrated GPU on its own, and general system performance is also 21 percent better, according to AMD. The company emphasises performance in multi-threaded applications in comparisons against Intel, because its advantage is being able to offer more cores and threads per CPU.

The new Ryzen 3 and 5 processors with integrated graphics will be sold in retail boxes with silver strips running across the top to differentiate them from standard CPUs. In contrast to Intel's strategy of integrating graphics processors into all its mainstream CPUs, there will be no Ryzen 7 models with integrated graphics, at least in this generation. AMD believes that those in the market for high-end CPUs will want a powerful graphics card anyway.

AMD has also announced a new cooler, the Wraith Prism, which improves upon the Wraith Max with individually addressable RGB LEDs and a design that works better on smaller motherboards. Finally, AMD is announcing a partnership with enterprise storage vendor Enmotus, to support the Enmotus Fuzedrive which allows users to create a multi-tier storage subsystem including spinning hard drives, fast SSDs and RAM caches, similar to Intel's Optane strategy.

Vivo to Release Android Oreo Update for 7 Smartphone Models in April
WhatsApp Payments Rolling Out in India: How to Get Started With the UPI-Based Service