AMD CEO Dr Lisa Su announced a new high-end GPU for gamers and creators, the Radeon VII, at her debut CES keynote. The new Radeon VII is based on the company's second-gen Radeon Vega architecture and will be the world's first desktop GPU to be built using a 7nm manufacturing process. According to Su, this GPU will be able to deliver performance exceeding 60fps in the latest games using the highest settings while running at 4K. Su also showed off a preview version of an upcoming 3rd Gen AMD Ryzen CPU, which will be launched in the middle of 2019.

Compared to the Radeon Vega 64, the new Radeon VII GPU is said to deliver 29 percent better performance on average in games, and 36 percent better performance on average in content creation, including game development. For gamers who aren't using 4K, the Radeon VII is claimed to deliver high refresh rates with HDR enabled at 1080p, or ultrawide 1440p, or general productivity at 8K.

The GPU is built around 3840 stream processors clustered into 60 compute units, running at up to 1.8GHz. Radeon VII graphics cards will have 16GB of second-gen HBM2 memory using a 4,096-bit interface for a total memory bandwidth of 1TBps. This is 2X the amount of memory and 2.1X the bandwidth.

The new AMD Radeon VII will be available to purchase and in select Dell Alienware gaming desktop starting from February 7 for a suggested retail price of $699 (approximately Rs. 49,290) with three free games: Tom Clancy's The Division 2, Resident Evil 2, and Devil May Cry 5. 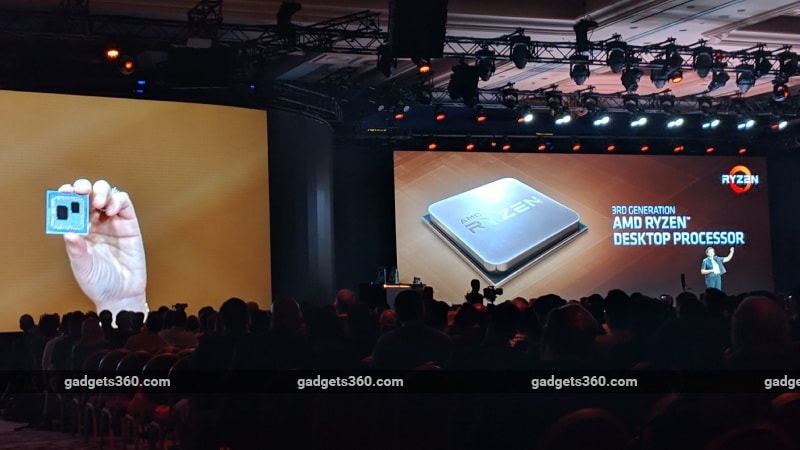 Closing out the keynote with “one more big thing”, Su showed off a preview of the upcoming 3rd Gen Ryzen desktop series. These will be 7nm CPUs using the Zen 2 architecture and a chiplet-based design. According to Su, the 3rd Gen Ryzen series will “absolutely set the bar on performance, technology and power efficiency”. Contrary to pre-CES rumours, this was only a preview. The launch announcement will happen in mid-2019.

Su provided the first ever public preview of one of these chips, though no detailed specifications were announced. This was an 8-core, 16-thread sample chip running at non-final speeds, and it was benchmarked against an Intel Core i9-9900K live on stage using Cinebench R15 (multi-threade only). The 3rd Gen Ryzen sample chip scored 2,057 points and appeared to be running at an average of 133W, while the Intel Core i9-9900K scored 2,040 points and appeared to be consuming 179W on average. AMD also demonstrated the CPU running Forza Horizon 4 at 1080p using the highest settings, and achieving over 100fps consistently.

Su showed off a sample chip without its heatspreader for the first time, revealing two dies on the package. The smaller one is the 7nm Zen 2 die with eight cores, while the larger one is an IO die using an older manufacturing process. Su also announced that the 3rd Gen Ryzen series will be the first to support PCIe 4.0, but will also work with existing Socket AM4 motherboards as a simple drop-in upgrade.

Su also recapped the earlier Ryzen 3000 mobile series launch, including the company's first CPUs for Chromebooks, and stated that its upcoming 7nm second-gen AMD Epyc server CPUs are on track to begin shipping in the middle of 2019.

Will Nintendo’s Mobile Games Be More Important than the Nintendo Switch?
Apple, Qualcomm Spar Over CEOs' Comments on Settlement Talks