AMD is set to deliver its next-generation Epyc ‘Rome' server CPUs, Radeon ‘Navi' gaming GPUs, and third-generation Ryzen desktop CPUs based on the Zen 2 architecture, all in the third quarter of 2019.

Remarking that not a lot of information about Navi has been officially announced, Su announced for the first time that the company has developed an all-new graphics architecture that it is calling RDNA, for Ryzen DNA. According to Su, this is a completely new architecture, not a further derivative of the Graphics Core Next architecture which has been in use for several years now.

RDNA is said to enable faster clock speeds and reduce power draw. The new lineup of GPUs will be called the Radeon RX 5000 series in honour of AMD's 50th anniversary, and the first model to be announced is the Radeon RX 5700. This series of GPUs will also be the first to be PCIe 4.0 enabled, and it will be possible to use PCIe 4.0 with a third-generation Ryzen CPU on an AMD X570 motherboard (or some older ones that have been updated to be compatible).

Su did clarify that GCN-based Radeon GPUs will continue to be seen for some time, but RDNA is “the gaming engine that will power the foundation of gaming for the next decade”. RDNA was developed with a brand new compute unit design, and the idea was to optimise for efficiency. It also introduces a new cache hierarchy to make gaming more responsive. The graphics pipeline has been streamlined, optimising performance per clock cycle. AMD claims a 1.25x increase in performance per clock, and 1.5X increase in performance per Watt compared to existing Vega-based GPUs.

Multiple Navi-based GPU models will be formally launched at AMD's Next Horizon Gaming event on June 10, alongside the E3 gaming conference. However, AMD did preview the performance of the upcoming Radeon RX 5700, which is set to compete with Nvidia's GeForce RTX 2070 GPU, in Strange Brigade. The new AMD GPU outperformed its competition by 10 percent on average, though actual real-world performance remains to be seen. 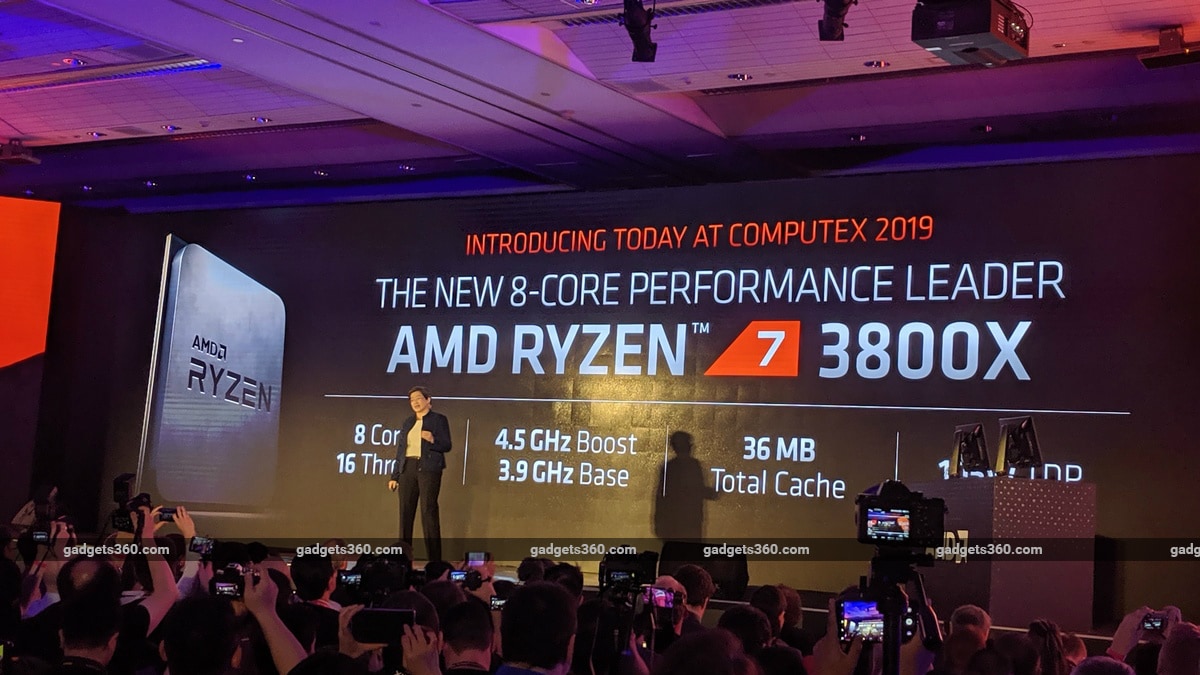 Later, Su went on to introduce the third-generation Ryzen desktop CPU family, set to debut on July 7 this year. The company showed off three models: the eight-core Ryzen 7 3700X and Ryzen 7 3800X, and the 12-core Ryzen 9 3900X. This marks the launch of a new Ryzen 9 series. Additional Ryzen 5 models were announced separately in a company press release.

The Ryzen 7 3700X features 8 cores and 16 threads with a base speed of 3.6GHz and a boost speed of 4.4GHz. This model has 36MB of cache memory and runs at 65W, as opposed to the current-gen Ryzen 7 2700X's 105W TDP. Single- and multi-threaded performance is up by 15 percent and 18 percent respectively, an this model is positioned against Intel's Core i7 9700K with similar single-threaded but up to 28 percent better multi-threaded performance.

The Ryzen 7 3800X also has eight cores and 16 threads but has a 105W TDP, allowing it to run at base and boost speeds of 3.9GHz and 4.5GHz respectively. This model is aimed at gamers and enthusiasts who want even more performance.

The final model shown off today was the Ryzen 9 3900X, which features two Zen 2 chiplets on a single CPU die, as was previously rumoured after Su showed off the third-gen Ryzen's package layout at her CES 2019 keynote in January this year. This chip has a 3.8GHz base clock and 4.6GHz boost speed, with 70MB of cache memory and a 105W TDP.

AMD showed a demo of this chip running Blender against the 12-core Intel Core i9-9920X, which is part of its high-end desktop platform. AMD claims up to 14 percent better performance at half the price and in a much lower TDP envelope than its competitor.