Share on Facebook Tweet Snapchat Share Reddit Email Comment
Highlights
Barely a few weeks after previewing its upcoming Radeon RX 480 graphics processing unit at Computex 2016, AMD has taken the wraps off two other models in the same lineup, the Radeon RX 470 and Radeon RX 460. At the E3 expo, Company CEO Lisa Su showcased the new GPUs which are based on the same Polaris architecture and will slot in at lower price points but still promise strong VR experiences and console-class gaming performance.

A company press release described the trio as "the full line of forthcoming Radeon RX series graphics cards", which would indicate a significant simplification and reduction of variants for AMD. The top-end Radeon RX 480 is priced at $199 (approximately Rs. 13,365) and while prices for its two new siblings are unknown, the starting point should be $100 (approximately Rs. 6,715). AMD says its new GPUs will "expand the VR ecosystem by democratizing exceptional VR experiences, making them available to many form factors and millions of consumers".

Specifications and performance numbers have not been disclosed, making it difficult to predict how well these new cards might perform compared to Nvidia's new high-end Pascal GPUs, the GeForce GTX 1080 and GeForce GTX 1070. However, official presentation slides obtained by Tweaktown appear to show that the Radeon RX 480 and 470 are both powered by the same Polaris 10 design, which has 2304 stream processors and runs at 1266MHz. The RX 480 will have either 4GB or 8GB of GDDR5 RAM on a 256-bit bus and require only a single six-pin PCIe power connector. There is no indication about how much lower the specs of the Radeon RX 470 will be to set it apart. The Radeon RX 480 will be the first to launch on June 29. 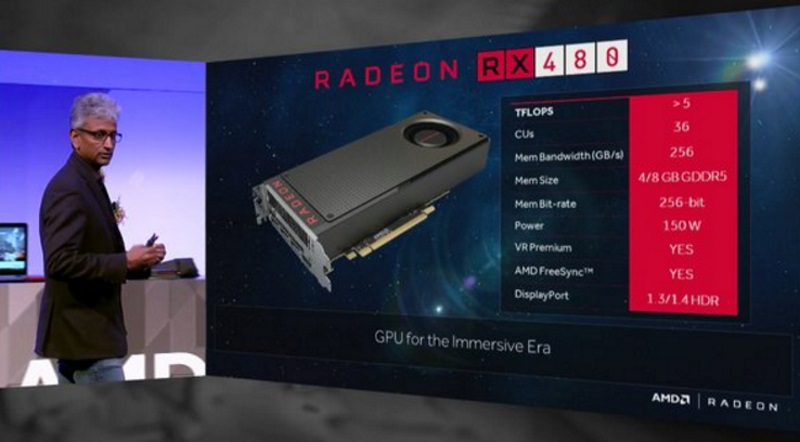 The Radeon RX 460 on the other hand will use the smaller Polaris 11 design which features 1024 stream processors. Clock speed is unknown, but there are indications that there will be versions of the RX 460 with 2GB and 4GB of GDDR5 RAM on a 128-bit bus. While the Radeon RX 480 runs at just 100W according to leaked benchmarks, the RX 460 should run at 75W, which means no power connector would be required. Graphics cards would also be able to get away with smaller, thinner and less expensive thermal solutions than their predecessors.

One of the demo cards held up by Su at the event had only a small fan over the GPU itself, not a shroud with heatsinks over the entire card as has become the norm. Polaris will also be making its way into notebooks, where the small size and ability to run cool are of much greater importance. Interestingly, none of the new Polaris GPUs use high-bandwidth 3D-stacked memory like last year's Radeon R9 Fury series - fans will have to wait till the Vega and Navi architectures are announced in 2017 and beyond.

Su also demonstrated Doom running on a PC powered by the upcoming Summit Ridge CPU. Summit Ridge is based on the Zen architecture, the first major architecture refresh in many years for the beleaguered chipmaker. The lineup will include at least one 8-core, 16-thread CPU, but no further specifications, prices or launch dates were announced.