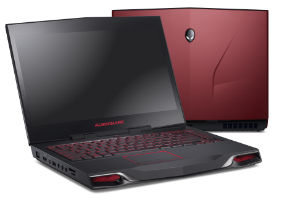 Highlights
Dell-owned Alienware added three gaming notebooks, the M11x, M14x and M18x, to it's portfolio yesterday. Only two of these will be available in India - the M11x which is an upgrade of last year's offering, and the brand new M14x.

Alienware has been committed to improve the gaming experience for users on the move. All gamers know that a true rig is the one that is custom built. You can overclock the CPU, bump up the specs and make it look like it came straight out of a terminator movie. But that isn't the case with a gaming notebook. It's usually ugly, bulky and drains battery faster than you can say "Finish Him!"

Alienware is trying to change that. Not only do they want to deliver the same graphical experience to gamers but make sure that the device looks sexy and has enough juice to last you a short flight at least.

So what's special about the notebooks? For starters, both devices feature stunning vibrant looks with the glowing Alienware logo on the back of the screen. A standard backlit keyboard matches the border neon lighting that surrounds the skeleton of the machine.

Under the hood, the M14x has a 14-inch WLED display with a resolution of 1600x900 and is powered by the second-generation over-clock-able Intel Core i7 CPUs with Intel Turbo Boost Technology 2.0. For your graphics needs, the machine has a NVIDIA GeForce GT 555M with up to 3GB of VRAM and Up to 8GB of 1600MHz Extreme-Performance system memory (RAM). Maybe Crysis 2 will run on it?

If you want to hook this baby up to a 3D TV, the device has an HDMI 1.4 out and also supports 7.1 digital audio out for your surround sound needs. If you decide to game on the device itself, you are entertained by a pair of Klipsch speakers onboard.

The M11x, on the other hand, is an update to last year's model with the same name. It is a little more portable as it has an 11.6-inch WLED display with a 1366x768 resolution. The CPU is a Second-generation Overclockable Intel Core i5/i7 and the graphics are taken care of by an NVIDIA GeForce GT 540M card. You can bump the RAM up to 16GB at 1333MHz. Like the M14x, the M11x also boasts of HDMI 1.4 out and onboard Klipsch speakers.

The true game changer here is the M11x as it has an 11-inch display making it a bit more portable than competing devices. But if the 14-inch M14x has caught your eye, you may want to take a look at the completion that includes the MSi GX 680, MSi GR620, Toshiba Quasimo (more likely to compete with the M18x), HP Envy 15 and the Asus G51.