Dell and its Alienware subsidiary have launched a number of new gaming PCs, monitors, and accessories at the Gamescom 2019 exhibition in Cologne, Germany. The new lineup includes two new gaming desktops, a number of monitors including the world's first 55-inch OLED gaming display, and a variety of gaming keyboards and mice. The Alienware Arena online gaming community is also being refreshed in time for its 10th anniversary. Starting with the new Alienware Aurora, this compact gaming desktop adopts the company's "Legend" design identity with all-new industrial design that aims to maximise airflow and make upgrades quick and easy.

Designed for esports enthusiasts, the new Alienware Aurora is available in Lunar Light and Dark Side of the Moon colour options. The company promises tool-free upgradeability and a large variety of options when it comes to internal components. The CPU options are all from Intel's 9th Gen Core family, ranging from a Core i3-9100 to the Core i9-9900K. RAM options go up to 64GB of dual-channel DDR4-3200, and storage goes up to a 2TB NVMe SSD plus a 2TB 7200rpm hard drive. Both AMD and Nvidia GPU options are mentioned, with the highest-end configuration being two GeForce RTX 2080 GPUs in SLI mode.

Multiple USB 3.1 Gen2 Type-A and Type-C ports can be found on the front and rear, as well as optical and coaxial S/PDIF audio outputs, Gigabit Ethernet, and Wi-Fi. The available configurations might vary from country to country. Alienware's Command Center software is used to control power profiles thermal management, RGB LEDs, and macros. The starting price in the US will be $969.99 (approximately Rs. 66,348). 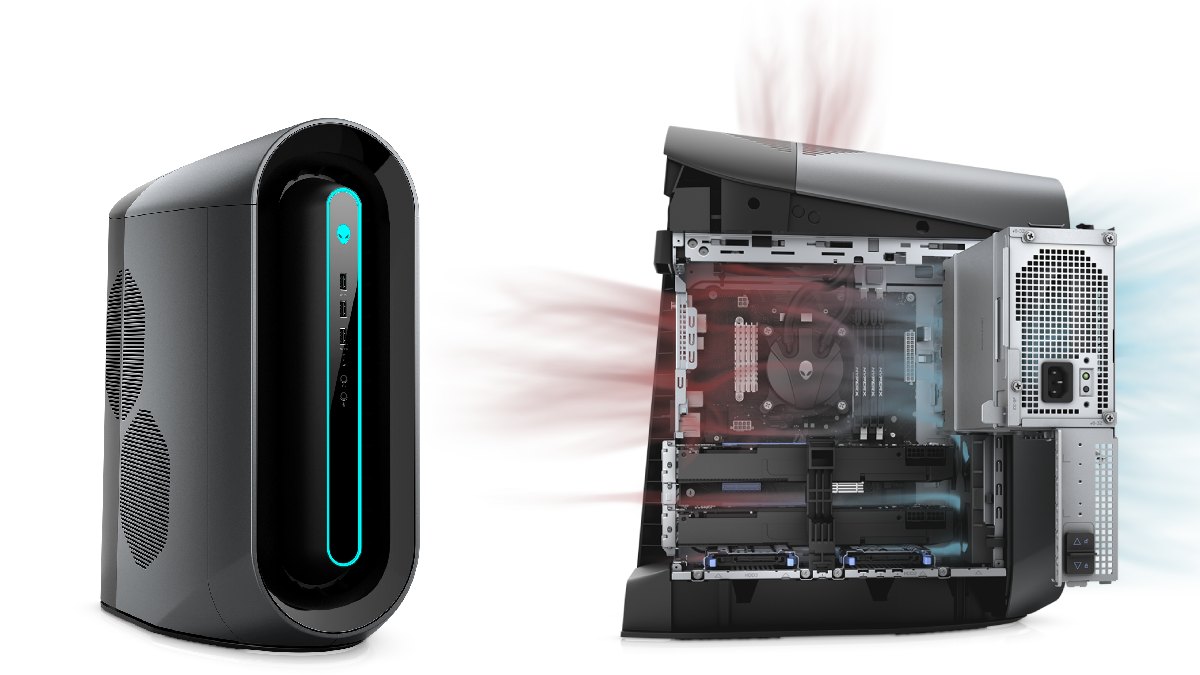 The Dell G5 5090 desktop joins Dell's G-series gaming laptops as a more affordable option for gamers. It is aimed at gamers as well as power users, and features an optimised airflow design as well as a distinctive ridged front panel and windowed side, with blue accent LEDs. CPU options are the same Intel 9th Gen models, and you can choose up to one Nvidia GeForce RTX 2080 graphics card. RAM goes up to 64GB of DDR4-2666, and you can have one 1TB PCIe SSD along with a 2TB hard drive.

Dell also supports the Alienware Command Center software on its G-series desktops and laptops. Prices for the G5 5090 desktop will start at $629 (approximately Rs. 43,025).

The 55-inch AW5520QF 4K OLED gaming display offers a variable refresh rate up to 120Hz using AMD's FreeSync standard. It also boasts of low input latency, along with 98.5 percent coverage of the DCI-P3 colour gamut. It also features RGB LEDs for immersive lighting effects and a game-optimised on-screen menu for setting options. It can be mounted on a wall or used on a table or desk. It also features built-in speakers. It will be priced at $3,999 (approximately Rs. 2,73,600).

Other monitors launched include the 34-inch 21:9 WQHD curved Alienware AW3420DW, which supports Nvidia G-sync at up to 120Hz, the Alienware AW2720HF 27-inch 240Hz FreeSync model with its full-HD resolution and 1ms response time, and the curved 32-inch Dell S3220DGF QHD HDR model.

Alienware has also launched two mechanical keyboards, one of which is a low-profile model, and three gaming mice including one wired/wireless model.

There is no word on if or when these products will be available in India, but they go on sale in the US in August or September this year.