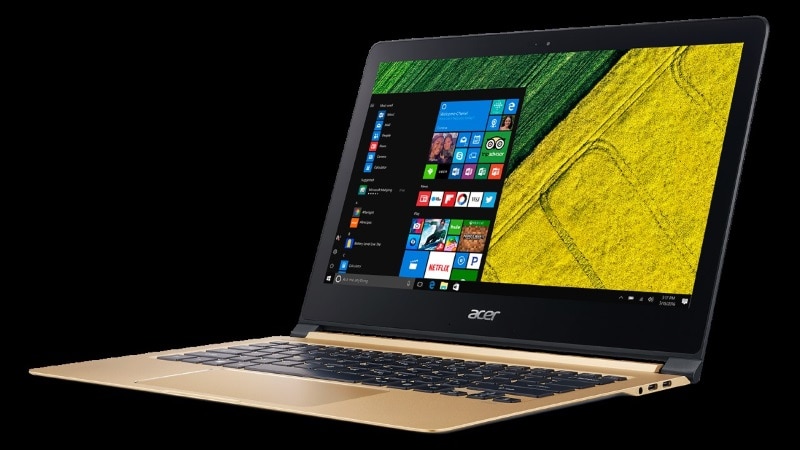 Acer launched its Swift 7 laptop at IFA earlier this year. The launch announcement for this laptop managed to grab eyeballs from around the world as the company claimed that it is world's thinnest laptop and first laptop that is thinner than 1 centimetre - 9.98mm to be exact. Now, this laptop has been finally launched in India and will be available for sale from November 18.

The Acer Swift 7 will be available through Acer's exclusive stores and select multi-brand outlets, while online it will be available for sale exclusively via Flipkart. The starting price of the laptop for India has been set by the company at Rs. 99,999. Apart from its impressive thinness, the base model of the laptop sports a 13.3-inch full-HD (1080x1920 pixels) display with Corning Gorilla Glass 5. It weighs just 1.1kg and can be carried around with ease.

"The flagship Swift 7 comes packed with an all-aluminium chassis that's less than one centimetre thin [and] is packed in performance and stamina for all-day productivity," Acer India said in its press release.

The base model of the Swift 7 sports an Intel seventh generation Core i5 processor coupled with 4GB of RAM (up to 8GB). It houses a 256GB SSD. Acer claims that the battery on the laptop lasts for up to nine hours.

"We are extremely excited with the India launch of Swift 7. Being the thinnest laptop in the world, it has a premium positioning in the market and with this latest offering we have fulfilled the need for great performance in a beautiful thin package. Over the last few quarters, we were focused on strengthening our product portfolio by leveraging the latest in technology," Chandrahas Panigrahi, senior director and consumer business head at Acer India, was quoted as saying in company's release.