Acer has introduced a new member to its Helios gaming laptop family called the Predator Helios 700. The new laptop features a unique slide-out keyboard which Acer calls HyperDrift, which exposes two additional cooling fans to tame the heat generated from extended gaming sessions. The company has also refreshed its Predator Helios 300 gaming laptops, giving it a new design along with updating the main specifications. The details, availability and pricing for the laptops are as follows.

The Acer Predator Helios 700 features a 17-inch full-HD IPS display with a 144Hz refresh rate, 3ms response time and Nvidia's G-SYNC technology. The laptop is available with different CPU and GPU configurations, which include up to a 9th generation Intel Core i9 CPU and options of either an Nvidia GeForce RTX 2080 or RTX 2070 GPU. You also get up to 64GB of DDR4 RAM, Killer DoubleShot Pro networking with Killer Wi-Fi 6 AX 1650 wireless chip and the Killer E3000 Ethernet port, a 5.1 speaker system and fourth generation AeroBlade 3D fans and vapour chamber (in some models) for cooling.

The big highlight feature of the Acer gaming laptop though is the HyperDrift keyboard, which slides outwards, thereby revealing two additional air intakes and a glass panel, which gives you a peek at the five heat-pipes inside. Once out, the palm-rest area aims to offer a much more comfortable position for gaming. You also get per-key RGB backlighting, MagForce WSAD keys, a trackpad with two discrete buttons. The Predator Helios 700 also features a Turbo hotkey for instant overclocking and Predator Sense software to monitor your GPU and CPU status.

The Acer Predator Helios 700 will be available in April at a starting price of $2,700 (roughly Rs. 1,87,800). It will be coming to EMEA regions and China later, in July and June respectively. 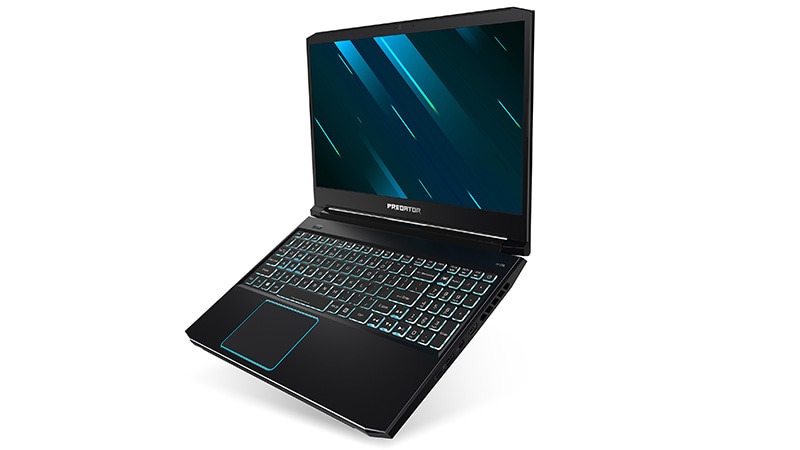 The Acer Predator Helios 300 is Acer's mid-range gaming laptop, which now gets a new design. The metal chassis now features teal blue accents, new keyboard with ‘Predator' fonts, and a narrow bezel around the display. The laptop will feature up to a 9th generation Intel Core i7 CPU, up to a Nvidia GeForce RTX 2070 with Max-Q graphics card, up to 32GB of RAM, and up to two PCIe NVMe SSDs in RAID 0, plus a standard mechanical drive. It will be available with either a 15.6-inch of 17-inch full-HD IPS panel with a 144Hz refresh rate and a 3ms response time.

The Predator Helios 300 will be available in the US this month at a starting price of $1,200 (roughly Rs. 83,500). It will be coming to China and EMEA regions later in May and June respectively.

Disclosure: Acer sponsored the correspondent's flights and hotel for the trip to NewYork.

Further reading: Acer, Acer Predator Helios 700, Acer Predator Helios 300, Acer GPC
Roydon Cerejo Email Roydon
Roydon Cerejo writes about smartphones and laptops for Gadgets 360, out of Mumbai. He is the Deputy Editor (Reviews) at Gadgets 360. He has frequently written about the smartphone and PC industry and also has an interest in photography. With over a decade of experience covering the consumer technology space, he is also an avid sci-fi movie and TV show geek and is always up for good horror flick. Roydon is available at roydon@gadgets360.com, so please send in your leads and tips. More
PS4 Price in India Dropped for Sony Summer Promotion
Acer Nitro 7 Slim Gaming Laptop Launched, Nitro 5 Series for Casual Gamers Updated