Acer on Wednesday unveiled a new range of products at its next@acer global press conference. At the event held in New York, the company announced new notebooks, Chromebooks, gaming laptops, and other accessories for gamers, creators, families, students, and professionals. While there were several launches aimed at gamers, the company also introduced the Chromebook Spin 15, Chromebook 15, Chromebook Spin 13, and Swift 5 notebook. Notably, most of the devices will go on sale next month.

The Acer Chromebook Spin 15 is claimed to be the industry's first convertible Chromebook with a 15.6-inch 1080p display. It comes with a convertible 360-degree design. The 1920x1080 pixels resolution delivers sharp visuals while IPS technology provides wide viewing angles for sharing streaming video, Acer claims. The display also supports 10-finger touch for responsive browsing and running apps. The display comes with an additional display area for apps and tabs, as well as, a full-sized keyboard. Notably, the Chromebook Spin 15 weighs 2.1kg and is equipped with two upward-facing speakers.

The new Acer Chromebook Spin 15 is promised to deliver a battery life of up to 13 hours. It is powered by the quad-core Intel Pentium N4200 processor, Intel Celeron N3450 processor, or the dual-core Intel Celeron N3350 processor. It comes with 4GB or 8GB RAM and either 32GB or 64GB of inbuilt eMMC storage. Connectivity options include 2x2 MIMO Wi-Fi 802.11ac, and Bluetooth 4.2. Also, there is a 720p HD webcam with HDR and a wide field of view.

Acer has also introduced a new model in its Chromebook 15 lineup. The budget-friendly device comes with the same 15.6-inch display and a 14-hour battery life. The new Chromebook 15 has a full-HD display in both touch (CB315-1HT) and non-touch (CB315-1H) variants. The Chromebook 15 is powered by the quad-core Intel Pentium N4200 processor, the dual-core Intel Celeron N3350 processor, or quad-core Intel Celeron N3450 processor and comes with two full-sized upward-facing speakers that support high-definition audio. It comes with Intel Wireless-AC 7265 WiFi 802.11ac 2x2 MIMO, two USB 3.1 Type-C ports and two USB 3.0 ports. It will be available with up to 8MB dual-channel LPDDR4 memory and 64GB of inbuilt eMMC storage. The new Acer Chromebooks have USB 3.1 Type-C ports on each side for charging them. Both the new Chromebooks also have a USB 3.0 port and a microSD card reader. The Chromebook Spin 13 and Chromebook 13 feature Wi-Fi 802.11ac 2x2 MIMO and Bluetooth 4.2.

Notably, the exact specifications, prices, and availability details have not been shared by Acer yet.

Lastly, Acer also announced its new Swift 5 notebook that promises to provide more portability and performance. It sports a 15-inch display and its chassis weighs less than 1kg. The Swift 5 is powered by the latest Intel Core processors and ships with Windows 10. 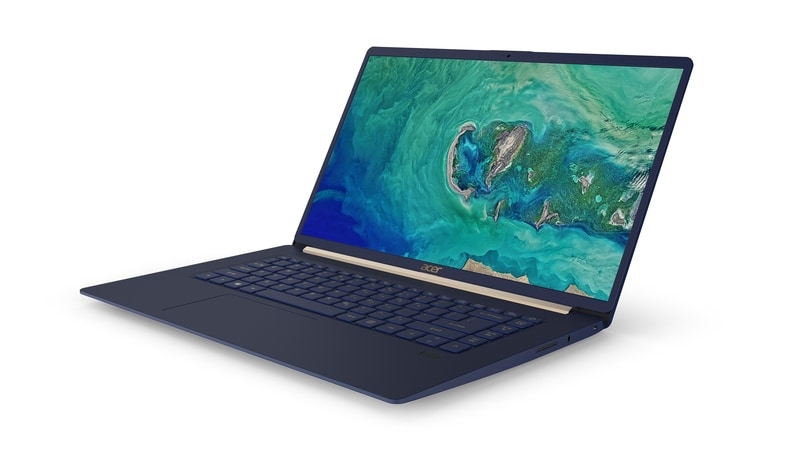 Powered by the latest Intel processors, the Acer Swift 5 promises a good battery life. The Swift 5 features Intel Wireless-AC 9560 which offers Wi-Fi 802.11ac connectivity. It comes with up to 1TB of SSD storage and up to 16GB of DDR4 memory. It has USB 3.1 Type-C Gen 2 port, two USB 3.1 Type-A ports (one with power-off charging functionality), an HDMI port, and an SD card reader. The Swift 5 also supports Windows Hello through a fingerprint reader. The exact specifications, prices, and availability details of the Acer Swift 5 have not been shared by the company as of now.