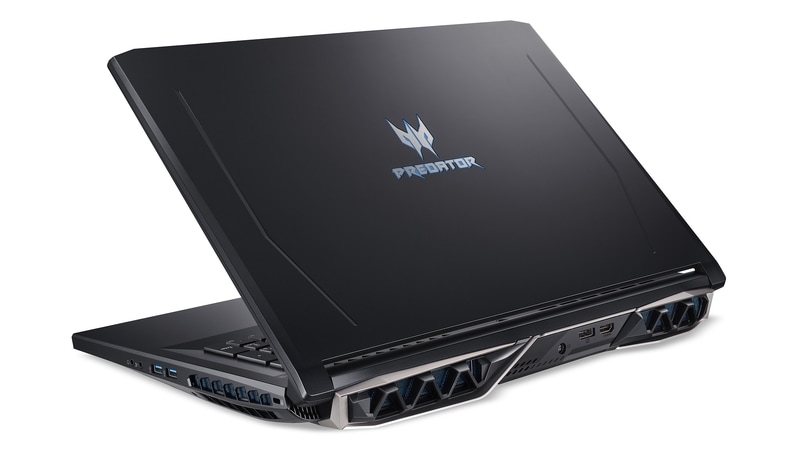 Acer on Wednesday unveiled a varied range of gaming devices at its next@acer global press conference. At the event held in New York, the company launched several new notebooks, chromebooks, gaming laptops, and other accessories for gamers, creators, families, students, and professionals. The latest gaming products from Acer include Predator Helios 500, Predator Helios 300 Special Edition, Nitro series, as well as, the Predator Orion 5000 and Predator Orion 3000 series. Notably, most of the devices will go on sale starting June 2018.

The Predator Helios 500 features up to 8th-generation Intel Core i9+ processors while the Predator Helios 300 Special Edition includes upgraded specifications from its predecessor along with a distinctive white chassis. Acer says that both the gaming notebooks feature VR-Ready performance, advanced thermal technologies, and faster connectivity.

As mentioned, the Predator Helios 500 features up to 8th-generation Intel Core i9+ processors and GeForce GTX 1070 graphics. It comes with Intel Optane memory, NVMePCIe SSDs, Killer DoubleShot Pro, and up to 64GB of RAM. Acer says that the notebook is ideal for gaming with graphic-intensive AAA titles and live streaming. It features 4K Ultra-HD or full-HD IPS 17.3-inch displays with 144Hz refresh rates. Also Nvidia G-Sync technology is supported on both the inbuilt display and external monitors. It has dual Thunderbolt 3 ports and HDMI 2.0 ports support up to three external monitors. Additionally, there are two speakers, a subwoofer, and it supports Acer TrueHarmony and Waves MAXXAudio technology.

The Helios 500 is equipped with two of Acer's proprietary AeroBlade 3D metal fans, and five heat pipes that distribute cool air to the machine's key components while simultaneously releasing hot air. Users can control the fan speed using the PredatorSense app. The app can also be used to control and monitor the notebook's vitals from one central interface, including overclocking, lighting, hotkeys, temperature, and fan control. Meanwhile, there is a backlit RGB keyboard that offers four lighting zones with support for up to 16.8 million colours. Also, the laptop features anti-ghosting technology that provides control for executing complex commands and combos.

Coming to the Helios 300, the Acer's budget-friendly gaming line has not got a Special Edition model featuring an all-white aluminum chassis with gold trim. The Helios 300 Special Edition (PH315-51) sports a 15.6-inch full-HD IPS display with an upgraded 144Hz refresh rate. It is powered by up to an 8th-generation Intel Core i7+ processor, coupled with GeForce GTX 1060 graphics, up to a 512GB PCIe Gen 3 NVMe solid state drive, and up to a 2TB hard disk drive. It also comes equipped with up to 16GB of RAM, and is upgradable to 32GB.

Acer has also introduced Nitro 50 Series gaming desktops, as well as the Nitro VG0 and RG0 gaming monitors. The Nitro 50 Series desktops are powered by up to 8th-genetation Intel Core i7 processors, and equipped with up to GeForce GTX 1070 graphics cards. They can deliver videos with 4K resolution and can support up to four displays simultaneously. They have up to a 3TB HDD and a 512GB SSD. They sport a handy wireless charging deck for Qi-enabled charging. The Nitro 50 Series also features armour-inspired housing with front-facing LED lighting. The Nitro 50 Series is equipped with Realtek Dragon LAN that optimises network speed for gaming, browsing, and streaming.

With AMD Radeon FreeSync, the Acer Nitro monitor's frames can sync with the graphics card's frames. Also, the Integrated Visual Response Boost (VRB) decreases blur in fast-moving images to achieve the effect of a 1ms MPRT, along with up to 144 Hz refresh rates. And, the Integrated 6-axis color adjustment lets gamers fine-tune colour, hue, and saturation levels, while built-in black boost enables gamers to select from 11 black level options to optimise visual advantage.

Acer says that the new Nitro RG0 series with 1920x1080 at 75Hz resolution is "perfect for 1080p full-HD gaming, multimedia, and productivity applications, including Blu-ray Disc console gaming and widescreen cinematic playback." Also, the IPS panels provide views at wide angles of up to 178 degrees horizontally and vertically. The monitors can tilt from -5 to 20 degrees (-5 to 15 degrees for RG0 series). They meet 72 percent of the NTSC standard and delivers a 250 cd/m2 brightness. They are equipped with two 2W stereo speakers, HDMI, VGA, and DisplayPort ports.

The display modes on the Nitro VG0 and RG0 series include Action, Racing, Sport, User, Standard, ECO, Graphic, and Movie. They also come with a VESA mount that can be used to be hung in the wall.

Coming to the Acer Predator Orion 5000, the gaming desktops feature up to 8th Gen Intel Core i7+ 8700K processors paired with the latest Intel Z370 SoC, up to 32GB of Intel Optane memory, and up to 2-way Nvidia GeForce GTX 1080 Ti GPUs. They have an IceTunnel 2.0 airflow management design that segments the system into different thermal zones and provides each sector with its own airflow tunnel to expel heat. They also sport a front mesh panel with dust filters. Additional features for gamers include Killer LAN high-speed Ethernet, cradles for audio headsets, and a carry-handle for portability.

The Predator Orion 3000 series features up to 8th-generation Intel Core i7+ processors, and up to Nvidia GeForce GTX 1080 graphics cards. The gaming desktops are the VR-ready and support 4K gameplay. Meanwhile, other specifications and features of the Orion 3000 desktops are similar to the Orion 5000 series.