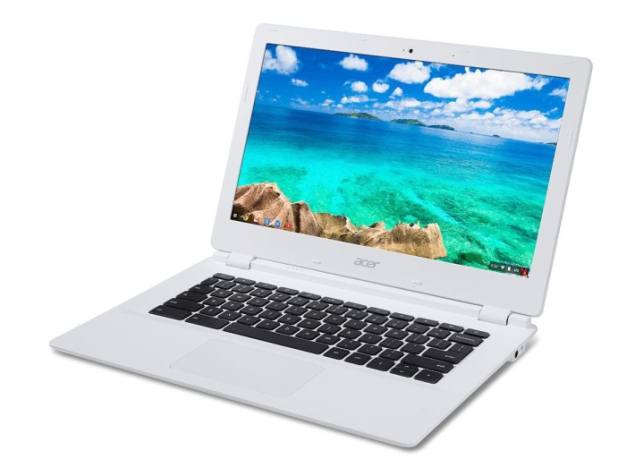 It seems that Acer is all set to add another Chromebook to its range, but this time - the Chrome OS-based laptop is powered with Nvidia Tegra K1 processor. Dubbed Acer Chromebook CB5, it was spotted listed on a Swedish retail site.

According to the website listing, Acer Chromebook CB5 notebook will feature a Nvidia Tegra K1 CPU with 4GB of RAM, a 32GB SSD and a 13.3-inch (1366x768 pixel) HD display.

First spotted by Android Authority, the listing on the Swedish retail site Komplett.se was later removed. Before being removed, the listing suggested that the Acer Chromebook CB5 will be available starting August 1.

Other than that fact, listing didn't include much else, but if we look at the purported images, the Acer Chromebook CB5 will include a 3.5mm headphone jack, Ethernet port, and two USB 3.0 ports. If the listing proves to be correct, then this would be the first Chromebook by Acer to be powered by a Nvidia processor.

Recently at its 'a touch more connected event' in New York, the company had introduced a new Chromebook, calling it the 'fastest Chromebook in the industry', along with five new laptops and two all-in-one PC.

Acer had also said it was the first Chromebook to run on an Intel Core processor, which will ship with a fourth generation Core i3 processor. It did not detail anything else about the new Chrome OS-based laptop, except for the fact that it will ship in 14-inch and 15-inch models, with a tentative release date of this summer.

Notably, Acer was one of the first to announce Google's Chrome OS-based notebooks along with Samsung at the Google I/O conference in May 2011. The first Chromebook began shipping on June 15, 2011.
Comments

Yahoo Wants You to Linger (On the Ads, Too)
Karbonn Titanium S99 With Android 4.4 KitKat Launched at Rs. 5,990