With 64 cores, AMD is amping up its battle against Intel's high-end Core X-series 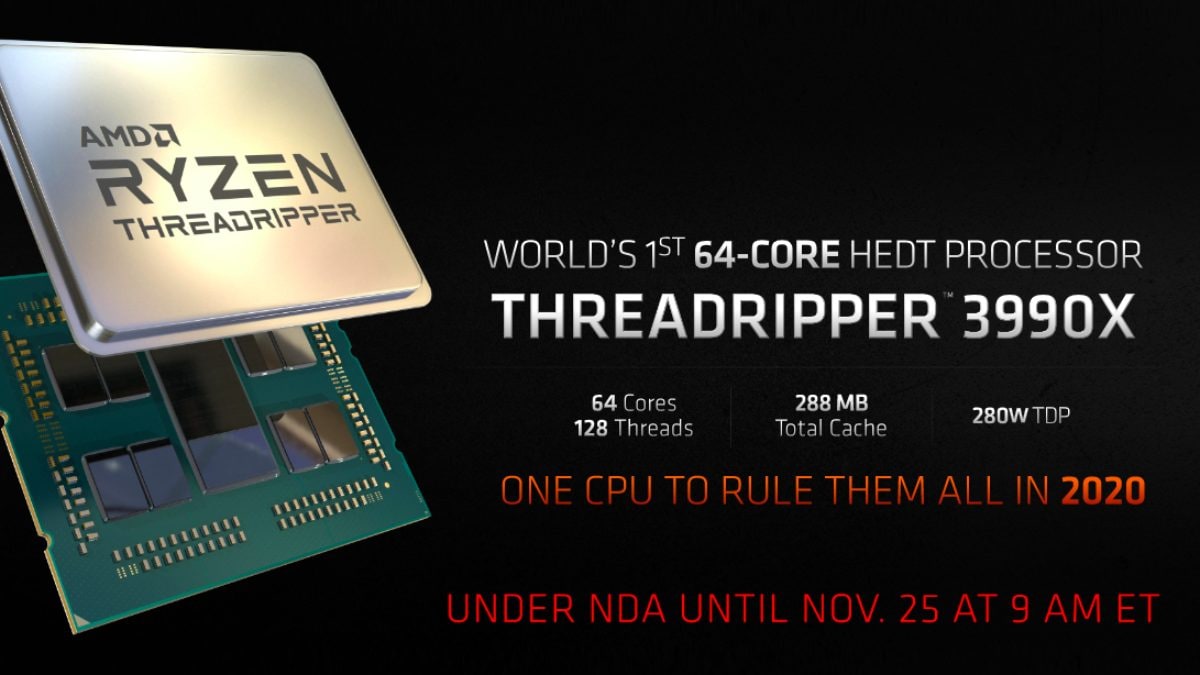 AMD has announced a 64-core Ryzen Threadripper 3990X CPU model that will be launched in 2020. The news comes at the same time as its 32-core 3970X and 24-core 3960X models have gone on sale. Very few concrete details about this new flagship model are known at the moment, but AMD has no doubt timed the announcement to strategically take focus from the launch of Intel's Cascade Lake-X refresh of the high-end Core X-series processors, which also go on sale today. AMD has claimed that the already-announced 32-core and 24-core Ryzen Threadripper models beat Intel's previous-generation offerings, so the new 64-core CPU should deflect some attention from the gains Intel makes with Cascade Lake-X.

The Ryzen Threadripper 3990X will have 64 cores with 128 threads thanks to simultaneous multi-threading. It will have 288MB of total cache memory, including the L2 and L3 caches. The company has also announced that it will have a 280W TDP rating which is the same as those of the lower-end third-generation Threadripper series. Clock speeds and other details have not yet been announced.

AMD has used a modular design with its third-generation Ryzen CPUs, based on the Zen 2 architecture. Using small chiplets with 8 cores each, the company can build various different CPUs from the same building blocks. The mainstream Ryzen models use one or two such chiplets, while the Ryzen Threadripper 3970X has four, for 32 cores, and so the Ryzen Threadripper 3990X will feature eight, judging by AMD's promotional photo. These chiplets are manufactured on a 7nm process and all connect to a central IO die.

Specifics of the architecture, the price, and even a rough launch timeframe have not yet been announced. It is not certain that the 64-core Threadripper 3990X will use the same sTR4 socket and TRX40 motherboards as its lower-end siblings. Rumours and certification listings have suggested that two new chipsets, called TRX80 and WRX80 could be launched alongside these multi-core behemoths.

AMD's numbering scheme also makes it possible that an intermediate model, a hypothetical Ryzen Threadripper 3980X, could be released. It would make sense for such a CPU to feature 48 cores. If that is the case, the company has not yet revealed so much as a teaser.

At the opposite end of the market, AMD has also introduced a brand new entry-level CPU, the Athlon 3000G, which will cost Rs. 3,590 in India. This model will target budget-constrained home and office users. The Athlon 3000G features integrated Radeon Vega 3 graphics as well as an unlocked multiplier that allows for easy overclocking without voiding the warranty.

The Athlon 3000G is a dual-core CPU with four threads, running at 3.5GHz with no turbo boost. It has a 35W TDP rating. It is based on AMD's first-generation Zen architecture and will succeed earlier Athlon models, with a new numbering scheme that fits in with the current-generation Ryzen family.