You can find good options with Windows 10 in this segment

You might have to compromise on RAM and display resolution

Today, laptops have become ubiquitous in our daily lives and just like smartphones, we rely on them to get most of our work done. Gone are the days when most households would get an assembled desktop PC as the “family computer.” Now, it's a lot cheaper and more convenient to simply buy a budget laptop instead of building a basic desktop PC or even buying a pre-built one.

The advantages are very obvious. Laptops don't require a tonne of space, so you don't have to dedicate any part of your living room or bedroom to one. Secondly, you can actually put a laptop in a backpack and carry it around wherever you go, unlike a desktop.

While it's easy to be swayed by flashy marketing luring you into spending a lot on an expensive model, you really should be looking at your personal needs and thinking about what purpose you'll be buying a new laptop for, and how you're going to be using it.

Not everyone needs a razor-thin laptop or something that can chew through high-end PC games. Sometimes, you might simply want a basic laptop for Skype calls, working on Word, Excel or any other Office applications, or to simply sit back and catch up on a movie or TV show. Students living in hostels would also need a basic computer of some sort for their assignments and projects, for which a budget laptop should suffice.

Sometimes, you might simply want a second computer at home for your kids to use, or for other members in your family who would want to perform basic tasks. Today's budget laptops are often good enough for basic photo editing too, which isn't always the most convenient to do on your phone or tablet.

Among all the laptops under Rs. 20,000 that we've test, we found the Acer Aspire 3 (A315-32) to offer the best balance of performance and price. It's quite slim, which we like. Even though this laptop isn't much to look at, the plastic body is decently constructed, with not a lot of flex in the lid or keyboard area.

The lid can be tilted all the way back to 180 degrees, giving you plenty of freedom to work with. This is also one of the few laptops in its segment that offers access to the RAM and hard drive through panels on the bottom, allowing for easy upgrades.

You get Windows 10 preinstalled, along with useful apps for keeping drivers and software up to date. This laptop features an Intel Pentium Silver N5000 quad-core CPU, 4GB of RAM, a 1TB hard drive, and Wi-Fi 802.11ac. In real-world tests such as file compression and video encoding, the Aspire 3 (A315-32) posted the lowest completion time compared to the other laptops we tested. Battery life was also decent, and you can get through most of a workday on one charge.

However, the Aspire 3 (A315-32) is not perfect, and the reason Acer has managed to offer such specifications at this price is by compromising a bit on the display and speakers. The HD resolution for a 15.6-inch screen causes text and icons to have noticeably jagged edges. Viewing angles are also not the best, and the brightness could have been better.

The stereo speakers fire downwards from the bottom, and while they get loud, they sound quite tinny. This is also one of the heaviest laptops that we tested, so it's not as portable as some of the others.

We've tested a bunch of iBall laptops over the years, but the company's most recent launch, the CompBook Netizen 4G (Review) is a unique offering, especially considering its price. The laptop has a 4G SIM slot, which lets you stay connected to the Internet at all times. This could be a very handy feature for those who travel frequently and don't want to bother with tethering to a phone or using an external 4G dongle.

Battery life is solid too, and with light workloads, we comfortably managed to use it for an entire workday, and then some. The CompBook Netizen has a full-HD display, which produces sharp images and text on the 14-inch panel. You also get 64GB of flash storage, which is better than the 32GB we're used to seeing in these affordable laptops. Last but not least, the CompBook Netizen 4G also has a compartment on the bottom that lets you install a 2.5-inch SSD or hard drive, thereby letting you add more storage. 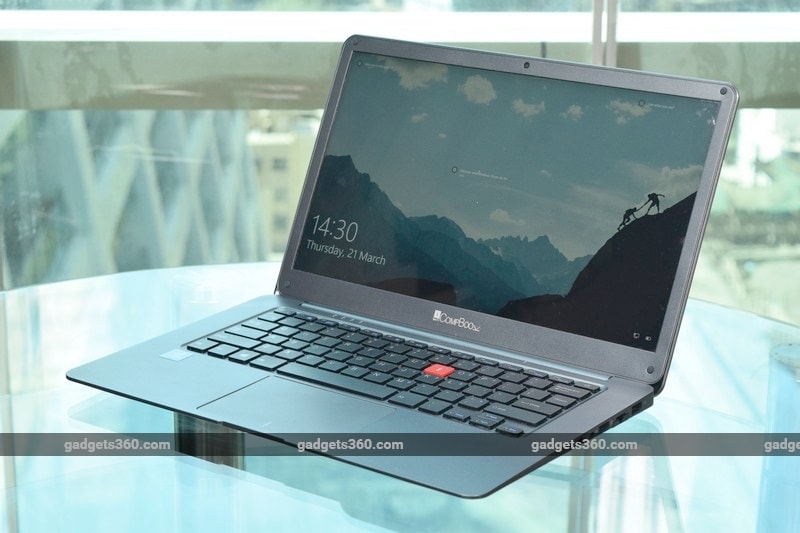 A few areas where it lags behind the other contenders are its CPU power and build quality. The Intel Celeron N3350 used in this laptop is quite old now and doesn't offer very good single- or even multi-core performance. As a result, tasks such as file compression and video encoding take a long time.

Then there's the build quality and design of the laptop itself. The plastic body doesn't feel very sturdy, and it doesn't exactly give off a premium vibe. We understand that the latter is tough to achieve when you're paying just Rs. 16,990, but others like Asus offer better-looking laptops in this range, so we feel that iBall could have upped its game a little bit in this department.

How we picked the best budget laptops under Rs. 20,000

Our main criterion for shortlisting laptops in this segment is that it has to come with Windows 10 preinstalled. There are plenty of options that ship with just DOS or a free Linux distribution, which sell for less. Such laptops could be good options to consider if you've already bought a Windows licence or are comfortable with Linux for basic Web browsing and such tasks.

However, for this guide, we were looking at a solution that's ready to go from the moment you take it out of the box. Thanks to its near-universal availability, most people are familiar with and comfortable using Windows, so we made it a must-have.

Second, we weeded out old laptop models that still use weak, dated CPUs. This really helped us narrow our search. While you shouldn't expect to find an Intel Core i3 or AMD Ryzen CPU in the sub-Rs. 20,000 market, you should be looking for one of Intel's Pentium or Celeron CPUs. We skipped laptops based on Intel's older Atom X5 series and AMD's E2 and A-series APUs, as these are quite old now.

Intel's Pentium Silver N5000 is a good CPU to look out for. It's fairly recent and power-efficient, in terms of power consumption, and it supports DDR4 memory. The Pentium N3xxx series is also commonly found in this price segment, and while it's a little older, you still get four cores in some models. Finally, there's Intel's Celeron family, which isn't as powerful as the Pentium series. The Celeron N4000 is another fairly recent CPU, but has just two cores.

We focused on laptop models that are available online at e-commerce sites, since this would be the easiest way for anyone to get their hands on any of our recommendations. Most of these models should also be available in offline retails stores in India, if you're hesitant about shopping online. The one thing you should know is that laptop prices keep fluctuating by small margins constantly, so there is a chance that some of the models we've listed that were at the borderline of Rs. 20,000, might have spilled over a bit by the time you read this guide. 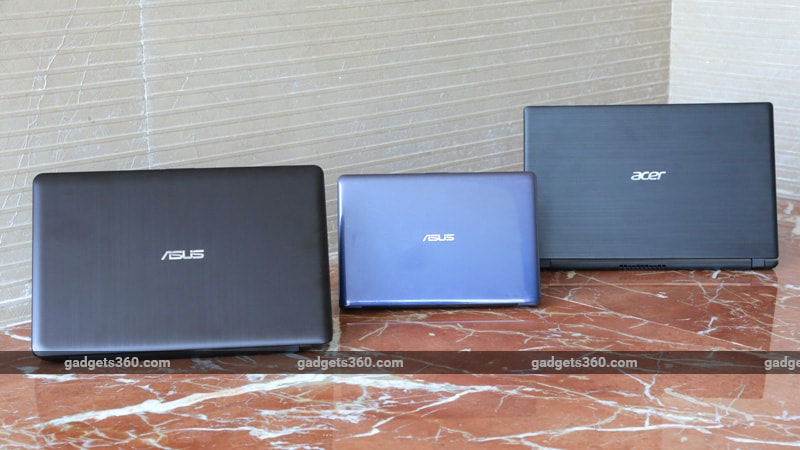 Asus VivoBook X540MA
The VivoBook X540MA is based on the Intel Celeron N4000 CPU and comes with 4GB of RAM and a 500GB hard drive. It has a decent selection of USB ports, although all of them are placed on one side, pretty close to each other — so if you're using a USB device with a plug that's wider than usual, it could block neighbouring ports. You do get a DVD drive in this model, which is useful if you still need to take physical backups.

This laptop is a little bulky, and the plastics and colour scheme give it slightly cheap look. Performance is also sluggish, the HD display has weak viewing angles, and there's noticeable flex in the keyboard. It doesn't have very good battery life either and at roughly Rs. 18,990, there are better options available.

Asus E203N
There's something very likeable about the E203N from Asus. Priced at around Rs. 14,990, it's based on a slightly dated Intel Celeron N3350 CPU, but its compact size is what would appeal to most people. It's slim, light, and even has a USB Type-C port, which is a rare find in this segment. The 11.6-inch display isn't very big but at least the HD resolution isn't too low at this size.

Our biggest problem with the E203N is the amount of storage you get. Just 2GB of DDR3 RAM and 32GB of eMMC flash memory is not enough for Windows and your applications. Windows boots relatively quickly, but we weren't able to run many of our tests because we kept running out of space. If you're going to be using Web-based apps or do your work in a browser most of the time, then his shouldn't be a big problem. The Asus E203N does have a microSD card slot, so you can expand storage if needed.

HP Notebook 15-Bs589TU
The HP Notebook 15-BS589TU is priced at around Rs. 19,789 at the time of writing this guide and features a decent set of specifications. Unfortunately, we weren't able to test it ourselves, but for this money, you get an Intel Pentium N3710 quad-core CPU, 4GB of RAM, a 500GB hard drive, a DVD writer, three USB ports, HDMI, and a LAN port. It also comes with an HD webcam and a 41WHr battery.

iBall Compbook Premio v2.0
The Compbook Premio v2.0 (Review) features the relatively strong Intel Pentium N4200 CPU and comes with 4GB of RAM. It's light, portable, ships with Windows 10, and offers good battery life. However, it doesn't make the cut since at nearly Rs. 19,990, the 32GB of onboard flash storage is simply too little for apps and files.

As we noted in our full review, we also found that the plastic body bends and flexes very easily. Also, the display panel isn't very good, and all your content will have a washed-out look. On the bright side, the battery life is solid, and one charge easily lasts through a workday, with some to spare.

iBall Compbook Marvel 6
The iBall Compbook Marvel 6 (Review) comes in at around Rs. 15,990, and for this little money, you get a decent full-HD 14-inch display, 3GB of RAM, and 32GB of storage. The storage is on the lower side, which could be an issue if you store a lot of files locally. The CPU is good enough for basic tasks but still a bit weak compared other options. Once again, the body and trackpad aren't the sturdiest, but this laptop does have a compartment on the bottom for adding a 2.5-inch hard drive. Just like the Compbook Premio v2.0, battery life is also very good.

Affiliate links may be automatically generated - see our ethics statement for details.
Comments
Roydon Cerejo Email Roydon
Roydon Cerejo writes about smartphones and laptops for Gadgets 360, out of Mumbai. He is the Deputy Editor (Reviews) at Gadgets 360. He has frequently written about the smartphone and PC industry and also has an interest in photography. With over a decade of experience covering the consumer technology space, he is also an avid sci-fi movie and TV show geek and is always up for good horror flick. Roydon is available at roydon@gadgets360.com, so please send in your leads and tips. More
Advertisement