Windows 10 Home vs. Windows 10 Pro: What's the Difference, and Which One Is for You?

What do you get with Windows 10 Home
Windows 10 Home is the basic variant of Windows 10. It comes with a number of new features including the revamped Start Menu. The company decided to chop it off from Windows 8 three years ago, but on popular demand, this feature is making a return to the desktop operating system. You also get a full-fledged version of Cortana, the digital voice assistant formerly exclusively available on Windows Phone. Other than that, the Home edition also gets you features like Battery Saver, TPM support, and company's new biometrics security feature called Windows Hello.

Battery Saver, for those unfamiliar, is a feature that makes your system more power efficient. It does so by limiting the background activity on the device. A TPM is a microchip that offers additional security-related functions. Many motherboard manufacturers install TPM chip on their device. Microsoft assures that if your motherboard has that chip, Windows 10 Home will provide support for it.

Home users will also be able to utilise the all-new Virtual Desktops option and Snap assist feature with up to 4 apps on one screen. Furthermore, they can also give a whirl to Continuum, a flagship feature of Windows 10 that lets you quickly switch from desktop mode to tablet mode. You are also bestowed with Microsoft Edge, the brand new browser in town.

The Home edition also supports Windows Update - eligible to snag automatic updates from Microsoft - and also provides security measures such as Microsoft Passport. The aforementioned features should fit an average Joe's bill as the company is providing all the essential features in the basic variant.

However, if you crave for more sophisticated protection, or if your work requires features such as support for side-loading of business apps, the Home edition could leave a lot to be desired, and you are better off with the Pro edition.

What do you get with Windows 10 Pro
The Pro edition of Windows 10, in addition to all of Home edition's features, offers sophisticated connectivity and privacy tools such as Domain Join, Group Policy Management, Bitlocker, Enterprise Mode Internet Explorer (EMIE), Assigned Access 8.1, Remote Desktop, Client Hyper-V, and Direct Access.

Assigned Access 8.1, for instance, allows you to lock user accounts and prevent them from accessing specific apps. BitLocker, on the other hand, is one of the most powerful disk-encryption tools on Windows. It lets you encrypt your external USB-drives. You also get tools that facilitate seamless connectivity while joining Azure Active Directory, and a Business Store for Windows 10. So should you get the Pro edition instead?

It all comes down to this: do you need features such as Client Hyper-V, which is a built-in virtualisation solution in Windows. Does your work require you to connect to a Windows domain? If yes, you should purchase the Pro edition. Else, the Home edition is what you need. 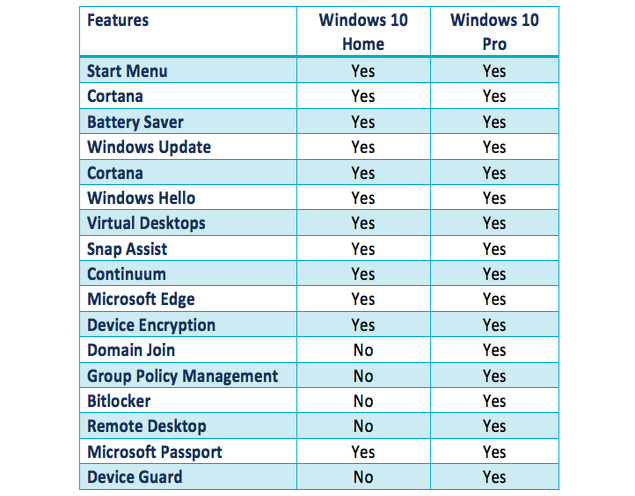 Beyond Home and Pro
While Windows 10 Home and Pro are direct paths for retail users, there are other variants of Windows 10 as well like Windows 10 Enterprise and Windows 10 Student. The Enterprise edition, as you may expect, is meant to meet the demands of medium and large sized organisations. It comes with even more sophisticated features such as Device Guard, which gives a company the ability to lock down devices. Unlike the other two Windows 10 Editions, however, the Enterprise variant won't be available for sale in retail stores. Instead, it will be sold through volume licensing.

The Windows 10 Education edition is designed for schools - students, teachers, staff, and administrators. The edition comes with most of Enterprise edition's feature. It too won't be available on sale at retail stores, though, and will be seeded out through academic volume licensing.

Speaking of other Windows 10 editions, we also have Windows 10 Mobile, and Windows 10 Mobile Enterprise. As their names suggest, both are designed to empower smartphones and not the desktop platform. Microsoft is also releasing Windows 10 Core, an operating system for Internet of Things devices.

Pricing
If you are a new user, Windows 10 Home will set you back by Rs. 7,999, while Windows 10 Pro will cost Rs. 14,999. Alternatively, if you are already on Windows 10 Technical Preview, you can continue to enjoy all the features of the new operating system for free as long as you've a Microsoft account (email account with Outlook or Live) and opt-in for future pre-release updates on either the Fast or Slow cycle.