Walk into Eddie DaRoza's office and you'll find two of him there: the actual 32-year-old video producer, and a 5-inch statuette of him.

"There are a lot of double takes. It's like a little action figure of myself," the Los Angeles native said.

He had the statue made on a lark. While waiting for his brother at a mall, he stepped into a studio that scanned his body and sent the scan off to a 3D printer. These studios are popping up rapidly as 3D scanning and printing technology gets more advanced. In New York City alone, there are at least four stores that offer the service, including three just in the past year. You can get scanned in just a few seconds and get your statue delivered in days.

The advent of digital cameras and smartphones killed the traditional mall portrait studio, but 3D printing has sparked a new trend. Overloaded with digital photos, statues may be moving in to fulfil our desire for portraits that stand out.

Many of the customers of the statue studios are parents who want statues of their kids. Sylvain Preumont, who opened a New York branch of his London-based iMakr store this year, said a soldier's wife had their three children scanned so he could bring them to Afghanistan. Victor De Los Angeles, owner of New York 3D printing and scanning store Cubo, has scanned several pregnant women.

"I had a lady come in the day before she went into labour and she was like: 'I need it done today,' "he said.

New York's Museum of Art and Design offered scans and statues earlier this year. Shapeways, the company that supplied the exhibit, said it scanned about 6,000 people and sold about 1,500 statues for $30. Woody Allen got himself scanned there, so it's now possible to buy a 3.5-inch statue of a slumping Woody Allen in a cardigan. The Smithsonian Institution scanned President Barack Obama and revealed a 3D printed bust of him this summer. It will be added to the National Portrait Gallery. 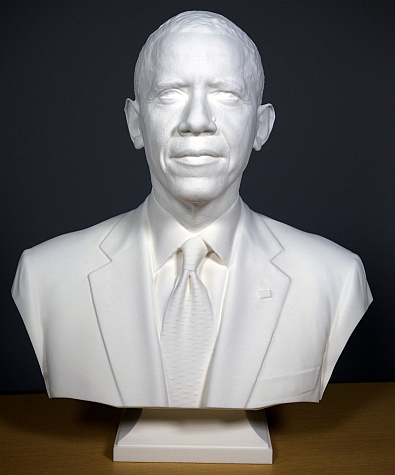 The typical 3D-printed statue is printed in full colour in a material known as "sandstone" - really, gypsum powder. It's glued together by color ink ejected from a head similar to the one found in an inkjet printer. The statues range from three to eight inches tall. The technology allows for a lot of variation in materials. IMakr offered chocolate statues for Easter. For 99 pounds, you got a box with six small chocolate likenesses of yourself.

Big businesses are getting into 3D statuary as well, with Wal-Mart Stores Inc. at the forefront. In July, at a newly opened Sam's Club in Montgomery, Illinois, and another outside Fort Worth, Tex., 3D printers scanned shoppers' faces and placed resin printouts of their heads on action figure-sized bodies of one of three Marvel characters. Wal-Mart's British unit, ASDA, starting testing a service in November that lets customers buy 8-inch figurines of themselves for 60 pounds, or $100. The studio is now permanent in one store, and it's been so popular that the company is considering rolling it out to other locations.

A Staples store in New York scans people's faces and puts them on NBA and Star Trek figurines. The goal of the pilot program is to get small businesses to use Staples Inc. for 3D scanning and printing jobs, just like they've provided those services for paper.

One example of what that might look like: A bakery that wants to use statues of the bride and groom as wedding cake toppers would need a printer that cost $60,000 or so, plus the expertise to use it. Staples wants to do that job for them, for $70. Before that can happen, small businesses like bakeries have to learn about the possibilities of 3D printing.