The box in which all the computer components are housed, next to your monitor or below your table, is often referred to as a "CPU". Really though, the actual Central Processing Unit is just a small chip inside the computer. Everything else in the box is connected to it to help it process instructions and provide results.

The CPU is the core of any computer. It's what's also known as the processor, and is a lot smaller than most people imagine. The shiny metal that you see is only a heatsink, called the "integrated heat spreader", and is mounted on top of the actual chip. It transfers heat away from the CPU to ensure stable operation (silicon transistors have certain temperature ranges in which they perform optimally, and would get damaged without proper cooling).

The CPU is made up of a control unit and an arithmetic and logic unit (ALU). The control unit controls how incoming data is processed by the CPU, and hands the processed result to its destination.

This input data comes from the computer's memory. Present day computers are designed around the stored program architecture, also known as the Von Neumann Architecture. What this means (in the sense of method, plan or algorithm) is that data must be loaded from memory, and the result processed by the ALU must be stored into memory as well. 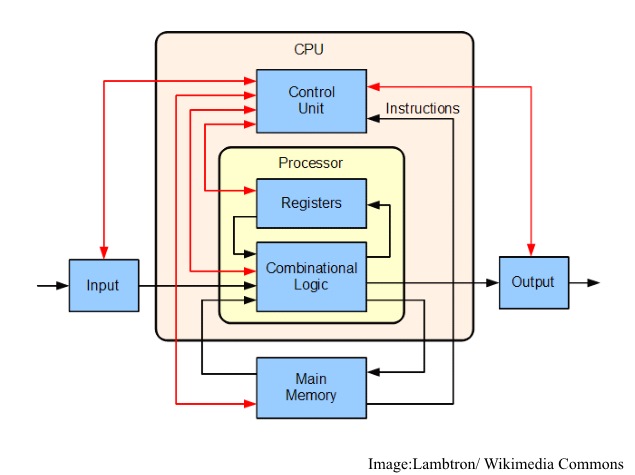 This exchange happens via a memory interface, under the directive of the control unit. This interface tracks two things: the memory location from which the data is read/ written, and the data transfer process itself.

So how does the ALU know what to do with the data? Well, we'll have to split the program code (residing in memory) into two parts: instructions and data. Basically, the CU expects the first thing read from the memory to be an instruction operation code, or simply "opcode" which describes the physical resources needed on the ALU, and the amount of data expected to follow. Thus, the first few bytes will be the instruction op code, and the next few bytes will be the data to be processed. Depending upon what specific instructions the ALU receives, it can do different things with the data.

The final pieces of the puzzle are registers, which are temporary spaces for data (or instructions) inside the CPU itself, which are used to feed the ALU faster than program code can be retrieved from memory.

Instruction set architectures
That was a simplified blueprint of a CPU, which only represents modern-day CPUs at a very high level. Today's CPUs contain billions of transistors, with millions of units of logic circuits operating over a billion times a second.

Processor architectures (both the actual physical layout and the abstracted logical layout) have evolved and expanded significantly over the years. They now implement sophisticated pipelining, branching, threading, and a whole host of other techniques to improve performance by ensuring that instructions are ready when needed, and that the results of operations executed simultaneously are assembled in the right order. 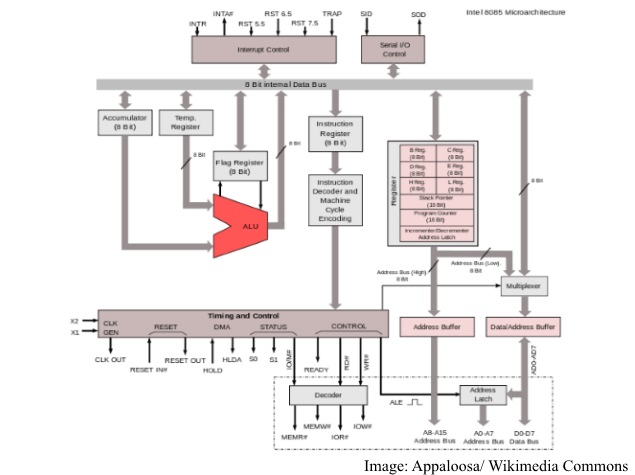 The apparent advantage of RISC is that a complicated instruction takes less time when interpreted as a set of smaller instructions. On the other hand, CISC handles the intricacies of algorithms rather than requiring programmers to do so, making it easier to write assembly code (the "low-level" language used to talk to the microprocessor almost directly).

Intel's x86 is an example of CISC architecture, while ARM's ARMv7 is a RISC design. Debate about the "best" way to do things in CPU design has raged on for decades now, and while RISC vs. CISC used to matter a lot in the 80s and 90s, there's little reason now to consider either better.

Either way, ISA refers to a broad set of instructions, methods, timing information (more on this later), algorithms, etc. which work together so that implementations of the ISA are compatible with each other. While the ISA is a broad blueprint, specific physical implementations can, and usually do, vary. That means AMD can engineer its processors differently from Intel's as long as they conform to the base x86 ISA.

When the limits of 32-bit x86 CPUs became apparent, Intel chose to develop an all-new architecture (called Itanium) whereas AMD worked on extensions to x86. Itanium failed to gain traction due to a lack of backward compatibility, and so AMD64 became the default industry standard. As a result, Intel had to cross-license AMD's 64-bit extensions, and so x86-64 is a common standard. The conformity ensures that software can run without any problem across different chips.

Companies that have licensed an ISA can do different things to improve performance and reduce power consumption. The can also add additional fixed function logic or otherwise extend functionality using their own ISA extensions.

Each different physical implementation of an ISA is called a microarchitecture, and this differentiation is often the basis of processor codenames. Haswell, Broadwell, Nehalem, Silvermont, Bulldozer, Steamroller, etc. are codenames that apply to families of processors based on a single microarchitecture. These are usually not the brand names exposed to the public. For example, Intel's Haswell processors are sold as 4th Generation Core Processors. Core i3, Core i5 and Core i7 are brands which are used to differentiate capabilities within families.

In Part 2, we talk about 64-bit computing, CPU cores, clock speeds, and the things that make some CPUs more powerful than others.