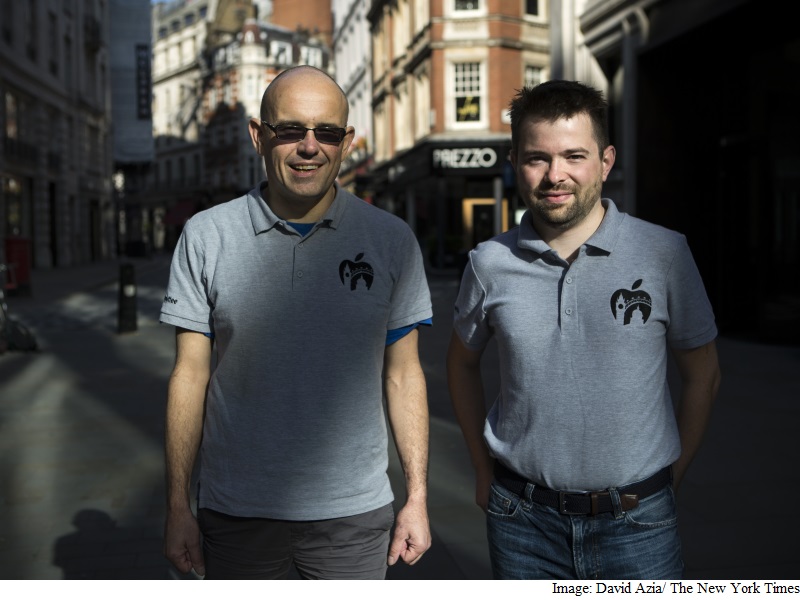 When Timothy D. Cook, Apple's chief executive, presents an updated iPhone and other gadgets at an event Wednesday, several hundred of the company's invited guests will be seated in a giant auditorium in San Francisco to watch.

More than 5,000 miles away in Britain, members of the London Mac User Group - comprising about 90 people, many of whom are longtime Apple enthusiasts - will also be watching Cook's event closely, but via a live stream at a pub called the Sun Tavern. Along with bar snacks and pints, a bingo game and a raffle will be part of the fun. The top prize: an Apple accessory.

"We organize a 'keynote bingo' for all of the catchphrases we think will come up," said Paul Foster, 46, vice chairman of the group, which is known as LMUG. While the group usually holds such gatherings at a nightclub called Tiger Tiger, that venue is closed for remodeling. The club also normally meets earlier in the day, Foster said, because "we have people of many ages, but we also have a lot of retirees."

So it goes these days for many Mac user groups, which were once the backbone of Apple's faithful. Beginning in the late 1970s to troubleshoot and discuss Apple products, these user groups are now mostly sidelined - to pubs like the Sun Tavern, church basements and libraries - as the company has outgrown them to become the world's most valuable enterprise, selling tens of millions of smartphones and tablets every quarter.

The continued existence of Mac user groups is an anachronism in a world where Apple customers today can almost instantaneously get tech support online and at Apple Stores. Only a few hundred user groups remain, down from several thousand at their peak in the early to mid-1990s. But they continue as a testament to loyalty and fellowship, qualities that seem quaint in a fast-moving world that sometimes favors online interaction over face-to-face encounters.

"It's as much about camaraderie as it is about helping people with their computers," says Scott Williams, 72, who leads the Aquidneck Island Mac User Group in Rhode Island, which draws about 25 regular attendees.

Members of some now-faded Mac user groups still maintain a connection. The Berkeley Macintosh Users Group, in Berkeley, California, filed for bankruptcy and shut down 15 years ago, yet some members continue to dine together every Thursday night.

"What really matters is the community, and that lives on," said the group's co-founder Raines Cohen.

In a statement, an Apple spokeswoman said the company was "honored to have the support of loyal customers like the members of Mac user groups, many of whom have been part of the Apple community for decades."

Mac user groups sprang up in the pre-Internet, pre-App Store era, with members sharing software on floppy disks and cooking up new ways to use then-novel Apple Macintosh machines. Some made their own applications. For the next 20 years, the clubs provided tech support, taught classes and helped expand the use of Apple computers in fields like desktop publishing, accounting, education and graphic design.

"It was a movement that believed we could solve our own problems and take care of each other," said Cohen, 48, who co-founded the Berkeley group in 1984.

At the time, the user groups amplified the then-unorthodox vision of Steve Jobs, Apple's co-founder, that a home computer could be easy to use and powerful. The groups enjoyed an open dialogue with Apple executives and employees, who sometimes dropped in on meetings. Jobs first demonstrated the 1984 Macintosh computer at a meeting of the Boston Computer Society, which spawned one of the country's largest Mac user groups.

In the 1990s, Apple was teetering close to bankruptcy and Microsoft dominated the personal computer industry. Jobs was pushed out of Apple in 1985 and returned in 1997, when the company was on the verge of collapse. Not long after Jobs' return, Michael Dell, head of rival computer maker Dell, said that if he were Jobs, he would shut down Apple and return the money to shareholders. At the time, the user groups were quasi-support groups for those who had chosen to be Mac people in a PC world.

Guy Kawasaki, Apple's former chief evangelist, likened user groups to churches that shepherded the community and the company through its darkest times.

"They filled the void of support and enthusiasm that the market wasn't providing and created a cult feeling that kept us going," said Kawasaki, who worked two stints for Apple, once in the 1980s and once in the 1990s.

The clubs were "the Genius Bars of their time, and they did it out of love," said Ellen Leanse, who led Apple's first formal user-group outreach from 1985 to 1989, referring to Apple's in-store technical support.

Now, even though iPhones dominate computing, and Apple's iOS mobile operating system is one of the most widely used in the world, longtime user-group members are not entirely convinced that Apple has won.

"People have predicted the demise of the iPhone since Day 1, and I read stories all the time that the company could fail," said Robert Zusman, the president of the Arizona Macintosh Users Group. "We still feel like we're fighting against the evil empire, like Google or Microsoft. It's hard to reconcile that Apple could be the empire."

The user groups' membership rolls have, not surprisingly, shrunk over time. MacNexus in Sacramento, California, had 1,300 members at its height in the late 1990s and is now down to about 650 members. Arizona's user group had 2,600 members at its peak and now has about 70. The Aquidneck Island monthly meeting in Rhode Island drew as many as 200 attendees in the mid-1980s.

"We're all suffering the same thing. We're not getting new people," said Bob White, 72, a MacNexus member. "A lot of us are senior citizens."

The clubs still provide tech support and classes to people who don't want to trawl the Internet for information or visit Genius Bars. Members do house calls for septuagenarian customers, and they repair systems that younger people have possibly never seen.

"I've owned a Mac longer than many people at the Genius Bar have been alive," said Zusman, 55. "I just helped a woman who was running (the 16-year-old system) OS 9."

Mostly, though, the user-group members like to talk about Apple and reminisce.

At a recent breakfast gathering in Berkeley, about a dozen former user-group members from around the country explained what made them Mac converts. For some it was the graphics, for others the typography and the photo editing.

They recalled pilgrimages to MacWorld, a huge trade show that focused on the Macintosh platform, and discussed inflated software prices and luminaries like Jobs and the Microsoft co-founder Bill Gates, both of whom had given presentations to the clubs.

"Do you remember any of the other CEOs?" asked Felix Kramer, 66, a former New York user-group member, referring to the three executives who ran Apple before Jobs returned in 1997.

"Gil Amelio, he's the other one," said Sylvia Paull, who had been on the board of Berkeley's user group. "God, remember Gil? That's when you knew things were bad."

Everyone nodded, but most people smiled. "Bad? What was bad?" asked Cohen. "It was an incredible revolution. We didn't give up."

Intex Aqua Slice II With Android 5.1 Lollipop Launched at Rs. 5,999
I've Used All Fitness Bands and I Wouldn't Recommend Any of Them