Logitech Says You'll Use Webcams With Your Smartphone in the Future

"We've reached a point where everybody has video, the question is how do you make it good," says Simon Dudley, Director, Product Strategy at Logitech. Dudley is in India to launch the Logitech MeetUp this week, the company's latest video-conferencing hardware which boasts of a 120-degree field of view, a 4K-image sensor, and an array of microphones. At Rs. 99,995, it's a far cry from a commercial webcam, or the camera that's already there in your smartphone, but Dudley points out that there's a continuum of devices that meet different needs.

"I mean, you have a laptop, and you can use it for everything, you can use it to watch movies and shows, right? But I bet that you have a television in your home, because it's a different experience," Dudley says. The company is betting that instead of relying on expensive proprietary solutions for video-conferencing, smaller businesses and startups would rather invest in solutions like MeetUp, which can be plugged into a PC and used with whichever videoconferencing software you need to use.

Like most people, Dudley agrees that mobiles are going to be the future of computing, and so we asked how this would impact the offerings from Logitech. After all, couldn't smartphones replace what the company is offering? "In our marketing, we have a slogan, that's 'Huddle, don't cuddle', you know?" responds Dudley. "The phone, the laptop, they're getting great and for personal use it totally makes sense to use those, or a webcam - and Logitech sells a lot of webcams - but the wide field of view of a MeetUp makes a big difference. Use a simple laptop camera and the person sitting next to you might not be in the frame."

Logitech MeetUp, he says, is designed for use in "huddle rooms", instead of larger meeting rooms. That said, he believes that in the future, you might be able to use solutions like the ones Logitech is selling with mobile phones. "In fact, I'm surprised when the iPhone X launched, that they are sticking with Lightning," says Dudley, "Because I can completely envision a future where you can just plug in accessories with a USB-C connector.”

“It's not something you can do with all accessories yet, but just like you can use all these third-party accessories with your PC, you'll be able to do that with the phone as well, and just run the Skype app or whatever,” he adds. “In terms of battery, and compute power, we're pretty close to being able to run something like the MeetUp off a phone, maybe in three to five years or even a little sooner."

"When you think about VC [video conferencing], traditionally you're thinking about the big TV and the mic array, that's really expensive to set up and to use, and it's not very flexible in terms of set up," he says, "and it's always been an industry that will arrive 'next year'. And although Logitech is a relative newcomer, we're already the biggest provider in unit terms because a study showed that around 97 percent of meeting rooms in businesses still have no VC capability." 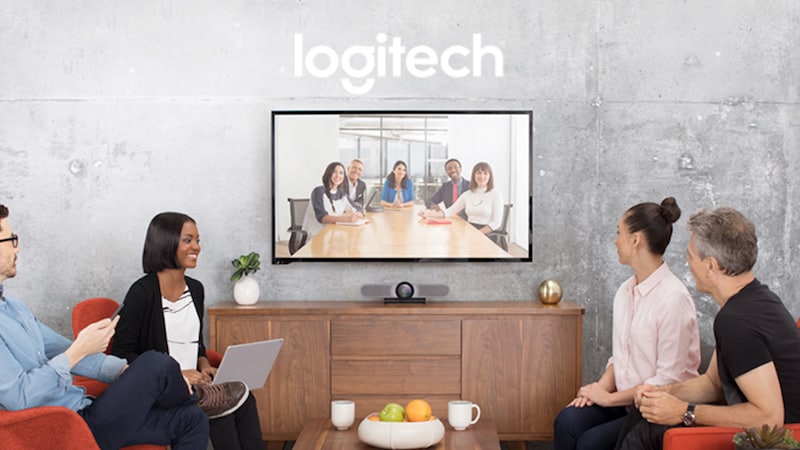 Logitech has a history of making consumer products at scale, and this is what it's counting on to gain a further edge in this space. Dudley explains that although the initial thinking had been that it would be more successful in the mid-market, sales of videoconferencing hardware like MeetUp have been coming from a much wider audience than what he says was the norm for the videoconferencing industry.

"I've been in this industry for 25 years and I'd decided to quit and write a book and be a consultant, when Logitech showed me what they're doing [in videoconferencing], and I realised I have to come back in," he says. "Video has always been expensive, but Logitech can make it mass priced. The infrastructure is now cheap and widely available, and the networks are much more reliable, so you don't need specialised connections or hardware."

"And the needs of VC solutions are evolving rapidly, with locations, multiple platforms and so on," he adds. "Earlier, it used to be that only the bosses had access to VC and they would talk to each other about work, but today you need to use video to actually do work."

The scale at which video solutions need to either be updated or replaced is large enough that even for large organisations, the cost of doing so simply isn't appealing, Dudley says. "We thought we would do will in mid-market, but even the global top 100 companies are adopting this because of the very wide deployment. They might still use the expensive systems for the CEOs and the board, but if you are equipping a few hundred or thousand rooms then it just doesn't take sense to do that."

Further reading: Logitech, MeetUp, video conferencing, Webcams, 4K webcams
Gopal Sathe Email Gopal
Gopal Sathe is the Editor of Gadgets 360. He has covered technology for 15 years. He has written about data use and privacy, and its use in politics. He has also written extensively about the latest devices, video games, and startups in India. Write to gopal@ndtv.com or get in touch on Twitter through his handle @gopalsathe with tips. More
Imagination Technologies to Be Bought by Canyon Bridge After Apple Ouster
Panasonic Toughbook CF-33 Rugged 2-in-1 Laptop Launched in India: Price, Specifications