How, and Why, Apple Overtook Microsoft 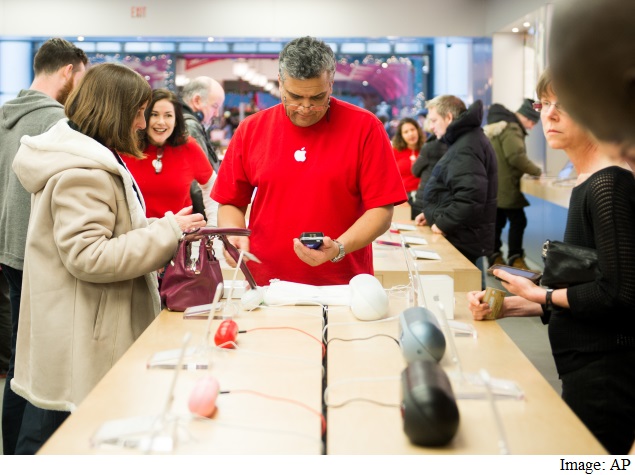 When Microsoft stock was at a record high in 1999, and its market capitalization was nearly $620 billion (roughly Rs. 38,31,445 crores), the notion that Apple Computer would ever be bigger - let alone twice as big - was laughable. Apple was teetering on bankruptcy. And Microsoft was so dominant in personal computers, then the center of the technology universe, that the government deemed it an unlawful monopoly.

At Apple's earnings conference call Tuesday, its chief executive, Tim Cook, called the quarter "historic" and the earnings "amazing." Noting that Apple sold more than 34,000 iPhone 6 every hour, 24 hours a day, during the quarter, he said the sheer volume of sales was "hard to comprehend."

Apple earned $18 billion in the quarter - more than any company ever in a single quarter - on revenue of $75 billion (roughly Rs. 4,63,481 crores). Its free cash flow of $30 billion (roughly Rs. 1,85,392 crores) in one quarter was more than double what IBM, another once-dominant tech company, generates in a full year, noted a senior Bernstein analyst, Toni Sacconaghi. The stock jumped more than 5 percent, even as the broader market was down.

A far more subdued Satya Nadella, Microsoft's chief executive, who is trying to transform the company and reduce its dependence on the Windows operating system, referred to "challenges." Microsoft's revenue was barely one-third of Apple's, and operating income of $7.8 billion (roughly Rs. 48,202 crores) was less than a quarter of Apple's. Microsoft shares dropped over 9 percent as investors worried about its aging personal computer software market.

Robert X. Cringely, the pen name of the technology journalist Mark Stephens, told me this week that when he interviewed Microsoft's co-founder, Bill Gates, in 1998 for Vanity Fair, Gates "couldn't imagine a situation in which Apple would ever be bigger and more profitable than Microsoft." "He knows he can't win," Gates said then of the Apple co-founder Steve Jobs.

But less than two decades later, Apple has won. How this happened contains some important lessons - including for Apple itself, if it wants to avoid Microsoft's fate. Apple, after all, is now as dependent on the success of one product line - the iPhone accounted for 69 percent of its revenue - as Microsoft once was with Windows.

The most successful companies need a vision, and both Apple and Microsoft have one. But Apple's was more radical and, as it turns out, more farsighted. Microsoft foresaw a computer on every person's desk, a radical idea when IBM mainframes took up entire rooms. But Apple went a big step further: Its vision was a computer in every pocket. That computer also just happened to be a phone, the most ubiquitous consumer device in the world. Apple ended up disrupting two huge markets.

"Apple has been very visionary in creating and expanding significant new consumer electronics categories," Sacconaghi said. "Unique, disruptive innovation is really hard to do. Doing it multiple times, as Apple has, is extremely difficult. It's the equivalent of Pixar producing one hit after another. You have to give kudos to Apple."

Walter Isaacson, who interviewed Jobs for his biography of the Apple co-founder and chief executive, said: "Steve believed the world was going mobile, and he was right. And he believed that beauty matters. He was deeply moved by beautiful design. Objects of great functionality also had to be objects of desire."

Like many successful companies, Microsoft nurtured its dominant position, but at the risk of missing potentially disruptive innovations.

"You have to acknowledge that Microsoft has been successful and it still is," said Robert Cihra, a senior managing director and technology analyst at Evercore. "But clearly, they've struggled over how to protect the Windows franchise while not having that hold them back in other areas. I think even Microsoft would agree that they've been too concerned with protecting Windows over the years, to their detriment."

By contrast, "Steve ingrained in the DNA of Apple not to be afraid to cannibalize itself," Isaacson said. "When the iPod was printing money, he said that someday the people making phones will figure out they can put music on phones. We have to do that first. Now, what you're seeing is that the bigger iPhone may be hurting sales of iPads, but it was the right thing to do."

Cihra agreed: "Apple laid waste to its iPod business. They're happier selling 74.5 million iPhones than they would be even if they still were selling that many iPods, which they wouldn't be anyway because someone else would have cannibalized them."

Microsoft has repeatedly tried to diversify, and continues to do so under Nadella. But "it's been more of a follower whereas Apple has been more of a trendsetter, trying to reinvent an industry," Sacconaghi said.

In belatedly buying Nokia, Microsoft is offering its own smartphone, the Windows phone, in head-to-head competition with Apple. While the device has garnered some critical praise, "I'm not sure consumers need a third option" to the Android and iOS platforms, Cihra said. Microsoft's already tiny share of the smartphone market has been dropping.

Perhaps more surprising, the Apple model of integrating all aspects of the design and manufacture of a product, long abandoned by other manufacturers, has been vindicated. Microsoft was once content to stick to software, ceding processors to companies like Intel and the PCs themselves to an array of other manufacturers.

"Microsoft seemed to have the better business model for a very long time," Isaacson said. "But in the end, it didn't create products of ethereal beauty. Steve believed you had to control every brush stroke from beginning to end. Not because he was a control freak, but because he had a passion for perfection."

Apple "proved that you want to own the hardware and not just the platform," Cihra said. "With the advent of PCs, everyone gave up on that model except Apple. But if you get that model right, the upside leverage is huge. If you want an Android device, you can go anywhere. But if you want an iPhone, you have to go to Apple.

"If you can do that, you get pricing power, and the profitability is unbelievable." Apple reported profit margins this quarter of just under 40 percent.

And then there's Apple's successful leadership transition to Cook, who took over as chief executive in 2011, shortly before Jobs died. It's not that Steve Ballmer, Bill Gates' immediate successor, and now Nadella haven't done a decent job at the helm of Microsoft. Until this week's dip, Microsoft shares were close to a record high. But Gates is still very much alive, and remains engaged with the company.

Jobs "told me that Tim Cook would be an inspiring leader," Isaacson said. "He knew Tim wouldn't wake up every morning trying to figure out what Steve Jobs would do. Steve would never have made a bigger iPhone. He didn't believe in it. But Tim did it, and it was the right thing to do."

Some investors worry that Apple could become the prisoner of its own success. As Sacconaghi noted, 69 percent of the company's revenue and 100 percent of its revenue growth for the quarter came from the iPhone, which makes Apple highly dependent on one product line.

"There's always the risk of another paradigm shift," he said. "Who knows what that might be, but Apple is living and dying by the iPhone. It's a great franchise until it isn't."

Apple is also running into "the challenge of large numbers," Cihra said. With a market capitalization approaching $700 billion (roughly Rs. 43,25,825 crores), the number "scares people," he said. "How can it get much bigger? How is that possible?" Apple is already the world's largest company, by a significant margin.

But he noted that by many measures, Apple shares appeared to be a bargain.

"The valuation is still inexpensive," he said. "It's less than 13 times next year's earnings and less than 10 times cash flow," both below the market average. "Those are very low multiples. They have $140 billion (roughly Rs. 8,65,165 crores) in cash on the balance sheet and they're generating $60 billion (roughly Rs. 3,70,785 crores) in cash a year. All the numbers are just enormous, which is hard for people get their heads around."

Cihra noted that Microsoft dominates its core businesses, leaving little room for growth. But, he said, "Apple still doesn't have massive market share in any of its core markets. Even in smartphones, its share is only in the midteens. Apple's strategy has been to carve out a small share of a massive market. It's pretty much a unique model that leaves plenty of room for growth."

Can Apple continue to live by Jobs' disruptive creed now that the company is as successful as Microsoft once was? Cihra noted that it was one thing for Apple to cannibalize its iPod or Mac businesses, but quite another to risk its iPhone juggernaut.

"It's getting tougher for Apple," Cihra said. "The question investors have is, what's the next iPhone? There's no obvious answer. It's almost impossible to think of anything that will create a $140 billion business out of nothing."