From China to India via Redmond 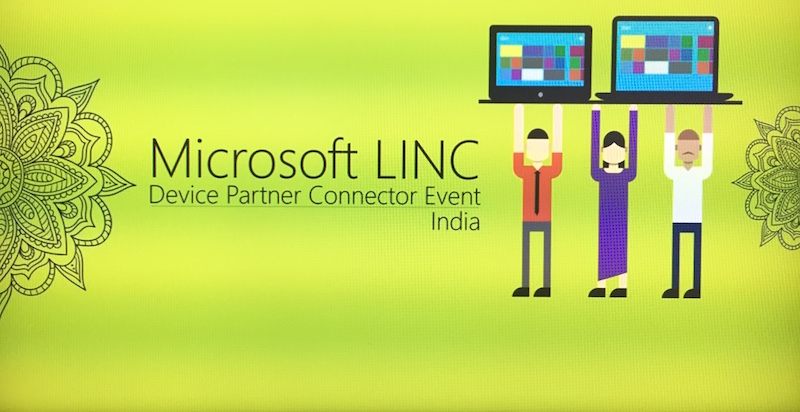 The five-star hotel in suburban Delhi is buzzing with activity. At the registration desk, a woman looks up from her smartphone to answer a query by one of the attendees. We are at Linc, Microsoft's attempt at bringing China's device manufacturers and India's leading brands under the same roof, in a bid to give the Windows ecosystem a boost.

"Some of the larger OEMs have been travelling to Shenzhen and other cities around the world, but this is the first time we've brought the program to India," says Sharlin Thayil, Group Director - OEM, Microsoft India. The event, held in Gurgaon last week, was attended by 21 leading Chinese ODMs such as Foxconn, and 29 Indian brands including the likes of Micromax and iBall.

Microsoft India hosted the event in cooperation with the Microsoft Global Device Sales & Partnerships team based out of Shenzhen, China. This team of over 100 people - across sales, manufacturing support, partner management, and software - works closely with major players in the China Technology Ecosystem (CTE), which has traditionally been known for releasing cheap Android devices by the truckload. As you would expect, the group's aim is to encourage ODMs to adopt Windows, and provide them with the support necessary to make this transition.

How it all began
"About 18 months ago, we realised that we weren't being competitive in the tablet market," says Mike Quinn, head of the Microsoft Global Device Sales & Partnerships team in China, who's in Delhi for Linc. "So we changed the license terms to make Windows free for any device under 9-inches, and also showed a willingness to directly license to ODMs."

"For anything under 9-inches, the aim was to be able to price compare at the bill of material level equal to Android," adds Quinn. Bill of material refers to the cost of components that go into the making of a device. While Android is free of any licensing costs, using Windows has traditionally meant an additional overhead for manufacturers. Not anymore.

"The goal was to make sure that when the customer sees the two products [Android and Windows tablets with same configurations] side by side, she wasn't making the decision on the price, [but on] features and functions," Quinn explains.

Quinn claims that Microsoft has partnered with 50 new manufacturers and brought over 165 Windows devices to markets worldwide in the last year. While Quinn wouldn't share detailed sales figures, there's some data from India that indicates all that work is starting to pay dividends.

"Q2 2015 has been a great quarter for Microsoft as Windows-based tablets' shipments more than doubled over previous quarter, standing currently at 5 percent OS share," IDC wrote in a recent report on India tablet shipments. NDTV Gadgets asked Vineet Durani, Director, Windows Business Group at Microsoft India if the success can be directly attributed to devices coming out of the China Technology Ecosystem (CTE) that are being sold in India by the likes of iBall and Micromax.

"You can actually plot it on a graph," Durani explains with a laugh. "The day we started getting the CTE devices [is when we started growing]. When we were at 1 percent, we didn't have too many CTE devices - 90 to 95 percent of what we had was non-CTE devices. Now, CTE devices constitute 60 to 65 percent of our device portfolio."

Any chance that Microsoft will adopt a similar strategy to make a dent in the smartphone market where it's struggled to have any kind of a real impact? Durani hints that convincing people to switch away from an Android phone might be a bigger challenge. With devices like two-in-ones, people feel they are getting a PC at a low price, he says, which explains the draw towards Windows tablets.

Repackaging or innovation?
So are Indian companies simply passing on the work of others as innovations for the Indian market, or are they adding some value of their own? From the outside, it seems like a bit of both, though Thayil bats for Indian OEMs.

"One of the OEMs has taken an existing solution and built a biometric solution on top of it," he says. "The company is then leasing devices to corporates for a monthly fee, monetising it almost like a service." Durani points to others that have built solutions that are being used for Aadhar-related application.

Events like Linc play an important role in keeping the two sides of the ecosystem connected, believes Thayil.

"One of the form factors that has emerged from [such events] has been two-in-one and it has brought computing power to people at around Rs. 15,000 mark, almost half the price of what a PC [with a similar configuration] would cost," he explains.

The Microsoft Linc event in Delhi had a demo area where select products by each participating ODM were showcased for the Indian OEMs to check out. The hall next door was divided into multiple meeting rooms, where the actual business discussions were taking place, so no time is wasted between seeing an idea and getting a new product line ready for the Indian market.

Microsoft gave NDTV Gadgets a walkthrough of the products on showcase, providing us a glimpse of what's likely headed to the market carrying the name of your favourite Indian manufacturer. Our money is on the tiny keyboard PC (pictured above) complete with Ethernet, USB, VGA, and HDMI ports.