With the announcement of the Samsung Gear VR, consumer friendly Virtual Reality is looking closer to being a reality than ever. Oculus VR founder Palmer Luckey, whose initial Kickstarter for the Oculus Rift can be seen as the start-point for the current interest in VR, also recently confirmed that the consumer version of the Oculus Rift will cost between $200 and $400, and he repeated that it will be as cheap as possible.

The Oculus Rift itself has gone through two iterations now, the first Dev Kit being released in March 2013, and the second version, the Rift DK 2, coming out one year later. Along the way, the Rift saw upgrades to the display and the tracking method it uses to create the sense of presence, and it is believed that the consumer version will launch sometime in 2015, with further improvements.

As we noted in our impressions of the Oculus Rift DK 2, the VR headset is an incredibly impressive creation, which makes you feel like you are literally inside virtual worlds. Staid old games that look reminiscent of early DOS games turn into immersive horror stories, and roller coaster rides feel real.

While it is our belief that the long-term success of the Rift will depend on reaching out beyond the gamer audience, there is no denying that many videogames seem tailor-made for virtual reality. Since readers have been asking about the different games we played, we decided to put together the highlights from two weeks of trials. It's a fairly small list because there was a lot to experience beyond games, and also because getting things to run can be fairly challenging. Despite this, we did get to try out some amazing games that make us want to buy the Rift on the first day it's available. Here are the highlights:

The original AaaaaAAaaaAAAaaAAAAaAAAAA!!! - A Reckless Disregard for Gravity (shortened to Aaaaa!) is a fast paced and hilarious game on Android and iOS devices, along with a PC version. The game is all about jumping off a building and hoping you don't go splat against a wall or a girder on the way down, and with the Rift and a good pair of headphones, the game does a great job of making you feel like you're hurtling to your doom.

You can get a free demo of the Rift enabled version of the game, and there's minimal setup involved.

Aaaaa! is a very fast paced game and there's not too much complexity to it either - you jump off a building and try not to hit things on the way down. Each individual jump doesn't last for very long either. These things combined to make the game a good experience for getting used to the Rift, though the first few times were a little disorienting.

That's because, on the one hand, your eyes and your ears are telling you that you're falling down at a very high speed. On the other hand, you're sitting (or standing) and the only things moving are your thumbs. The sensation can be a little confusing, and takes some getting used to. 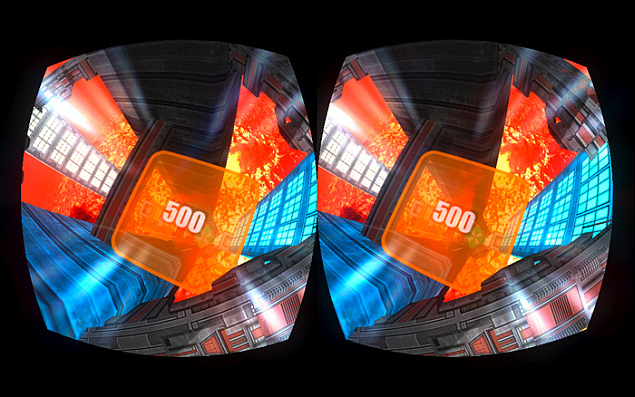 2. Alone in the Rift

The Oculus Rift is incredibly well suited to horror games. Maybe it's just that we are experiencing VR properly for the first time, and so it seems even more real than it actually is, and over time we'll become desensitised to the Rift.

As a first experience though, Alone in the Rift feels pants-wettingly real. The game uses a good mix of audio and visual scares to frighten you and the end result was honestly terrifying.

For this to work really well, put on a good pair of headphones. The game is really designed to work with the Razer Hydra motion controller, though it does work with the mouse and keyboard as well.

Using your keyboard, you walk through a dark forest, with just a little light from some lamps. By the time you come to the cabin in the woods, your heart is already pounding thanks to the eerie atmosphere, and then you see a little girl who looks like she belongs in the Ring. And that's just the beginning. This game is really not for the faint of heart. The 3D effect, of things coming right up to you works really well, and when something horrible moves towards you, the impulse to drop everything and scream and run can get overwhelming. 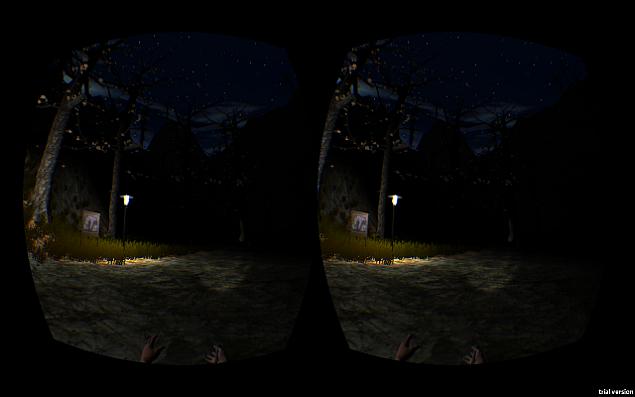 This was easily our favourite experience on the Rift, although setting it up also took the most time. To get this to work, you'll first need to update your Steam client to enable VR. Based on the troubles we had, the best thing to do is to uninstall Steam first, and just start fresh.

In the library menu, you'll find SteamVR, and you need to install that. SteamVR only works with the Rift in Extended Mode, not Direct to Rift, so make sure your headset is configured properly as well. Restart Steam.

Next, if you haven't already bought the game, buy Half Life 2, and then after it's installed, go to the Betas tab and download the HL2 beta. Launch the game, and in options, enable virtual reality mode. Quit the game. Start again, and this time activate virtual reality.

You might need to quit SteamVR, or Half Life 2, or Steam, before it actually works. Quite a few times, in fact. Once you do all this though, you're left with one of the best virtual reality experiences right now.

Half Life 2 is old enough that it should play smoothly on most machines, and the actual gameplay remains as technically sound as ever. In fact, the slightly slower pace (compared to Team Fortress or Quake) also shows that the Rift can be great for a first-person shooter.

Although your movement is controlled via the keyboard, you can look around by moving your head, and the center of the screen is used for aiming with the mouse. You can also drag the mouse to the edges to turn around, though this involves some frantic mouse pulling. This does mean that lining up headshots can be really smooth, as you basically shoot where you're looking. The mouse is just used for fine correction, instead of first quickly shifting the view, and then lining up the shot more carefully.

The varied environments of Half Life 2 also make the game a great showcase for the Rift. You'll move between small chambers and wide open spaces, go underwater and jump through mazes - the last can be a bit of a problem - when you look down, can see the platform you're on, but it can still be a little difficult to time jumps perfectly. Small caveats aside, among the full-fledged games we've tried so far, this is the one we loved the most.

You'll need the original Quake 2, along with some extra files you can get at the Oculus Developer forums to run the game. Once you have everything in place though, Quake 2 plays extremely well on the Oculus Rift, and is relatively easy to get running, compared to some of the other demos we found.

And you certainly are running. This was one of the few games which left us feeling a little queasy. The graphics have all been updated with the mod, along with some changes like replacing crosshairs with a laser sight, which makes a lot of sense in the 3D world of the Rift. The problem with Quake in the Rift is that everything is just so fast. When you're playing a video game on the monitor, you don't realise how fast the characters are moving, relatively, but in the Rift, the walls loom large, and you rush about in a way that leaves Usain Bolt in the dust.

Like with Half Life, aiming and shooting feels much more natural than just the keyboard and mouse combination we're used to, and this is one of the benefits of VR we certainly enjoyed. 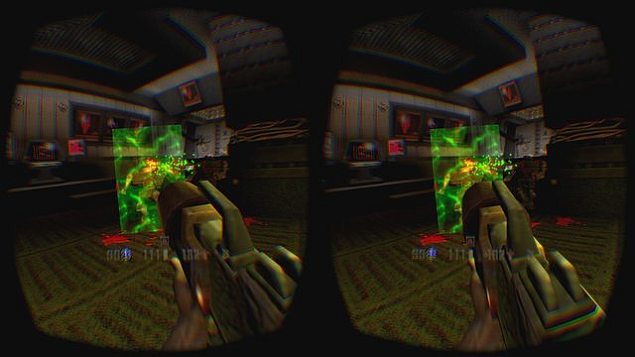 One genre that's making a comeback thanks to the Rift is space combat games. Eve Valkyrie, Elite: Dangerous, and Star Citizen are shaping up to be some of the top contenders, but there are some free games which show why the Rift is such a good fit for the genre.

The one which really made a mark on us was Star Wars: Battle of Endor which lets you recreate the famous space battle at the end of the last Star Wars movie. It's a little buggy, and only worked in Extended Mode for us, so be prepared for a little tinkering before you can actually play.

You control your X-Wing Starfighter with the mouse and keyboard, and you are seated in the cockpit, so you can see the ships "controls" in front of you, and you can look around the cockpit while you fly, so you can see where that blast of laser fire came from.

The gameplay is pretty basic, just challenging enough to be fun, and the Rift also helps create the sense of scale. When you play a space sim on a monitor in front of you, planets look tiny while spaceships can seem big. The Rift lets you get a real sense of the relative size of things, and although the graphics aren't the greatest, the game looks pretty good in motion. 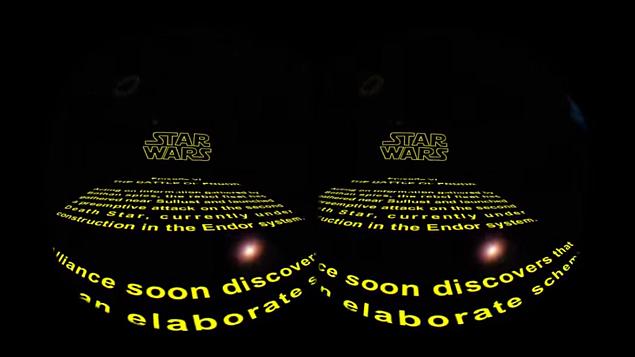 These were our five favourite game experiences with the Rift, but there are a lot of free and paid games you can already buy. By the time the consumer kit arrives, hopefully the experience of finding, installing, and running games will be a lot simpler - that's the one area that still has a lot of trouble. In terms of actual gaming though, it's clear that the Rift is a must buy product for gamers.