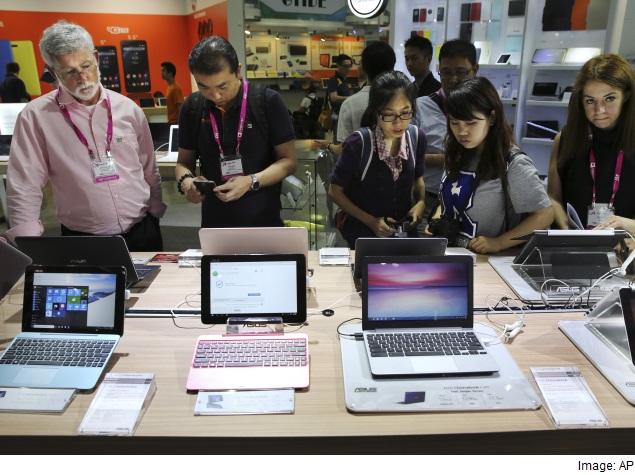 As the Computex trade show opens its doors Tuesday in Taiwan it is putting a new focus on startups to boost the island's tech credentials in the face of intense competition from rival China.

Taiwan has hosted Asia's biggest tech trade show for 35 years and made its name as a hub of innovation and engineering in the age of the PC, manufacturing components and assembling computers.

More recently it has benefited from Apple's new iPhone 6 (Review | Pictures), launched last year, with a number of leading Taiwanese firms such as Foxconn and TSMC reportedly among Apple's suppliers.

The island is also one of the world's biggest suppliers of semi-conductors and is home to well-known industry players, from computer maker Asus to smartphone brand HTC.

But as China pushes to grow its own tech industry with the development of domestic smartphone brands and homegrown hardware, including chips, Taiwan is looking to smaller niche firms with new ideas.

Nine startups which Computex organisers say have potential to tap international markets will be given a special exhibition area at the show this year for the first time in a bid to raise their profile.

"We have to turn to a new direction, with more innovation, rather than mass manufacturing," says Li Chang, deputy secretary general of Taipei Computer Association (TCA), co-organiser of Computex.

He called on the government to do more to support fledgling firms.

"There might be a number of young people who have creative ideas and can manage to turn them into innovative products, but... they face difficulties in raising capital and marketing," says Li.

Global push
New Taiwanese firm Mozbii, one of the nine startups selected, last year raised US$45,000 through crowdfunding site Kickstarter for what it bills as the "world's first colour picking stylus" - a hi-tech version of colouring in.

A round sensor at one end of the stylus captures the colour of any object it is pressed upon.

The stylus then replicates that colour when touched on a tablet screen, so children can fill in templates or draw their own creations.

"We have an environment here to develop things and the government is starting to sense the importance of supporting startups," says Mozbii CEO Jeremy Shu, who leads a team of eight.

"But pushing the product to the world is difficult."

Shu says there needs to be a public "incubator" to help entrepreneurs with development and marketing "startups are growing, but at a slow pace," he says.

Mozbii's stylus is already on sale in Taiwan and will be going to Japan and China this year.

At the other end of the scale, Asus crams in hundreds of international visitors to its Computex product launches, complete with theatrical film clips, booming soundtracks and catwalk models.

As it seeks to diversify away from PCs, Asus unveiled its new ZenPad tablet and Zenphone Selfie Monday - which includes a "beautification mode" to even out skin tone.

But the number of Taiwanese brands with global traction remains limited, says Ralph Wiegmann, CEO of Hanover-based iF International Forum Design, which helps organise the Computex design and innovation awards.

"Taiwan is a strong innovator, technology (here) has always been good.

"It's branding that's the major challenge it's a long-term issue and for many Taiwanese and Asian entrepreneurs long-term strategy is new."

Despite the hurdles, Wiegmann says the ever-expanding tech industry is providing new avenues for smaller firms and startups, with an increasing number competing for the design and innovation awards.

"It's still not easy for them, but they find their niche."