AMD Ryzen 3000 Series: Chiplets, 16 Cores, X570 Motherboards, and Everything Else You Need to Know

This underdog has learnt some impressive new tricks 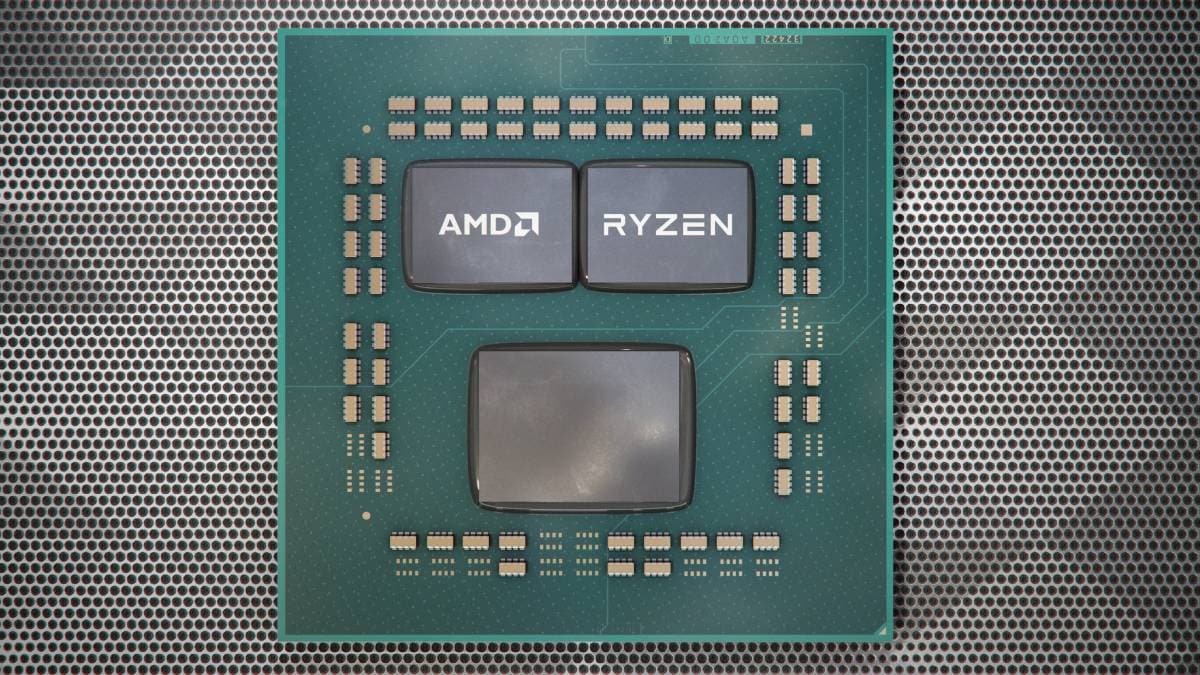 It was not too long ago that AMD's entire CPU lineup seemed like a lost cause, but somehow or the other, this relatively tiny company managed to whip up a completely new product line and claw its way back into the game. The Zen architecture was first announced in 2015 but had been in development since 2012. The first products based on it to ship were the original Ryzen desktop CPUs, in early 2017, and at the time AMD claimed a staggering 52 percent increase in IPC (instructions per clock) compared to its previous products. Since then the architecture has been scaled to AMD's Epyc server CPUs and Threadripper workstation chips as well.

Ryzen 1000 and 2000 series CPUs, based on Zen and the subsequent Zen+ revision respectively, have performed very well in our reviews. The company's fortunes have bounced back, at least in the DIY enthusiast desktop space. Intel's recent supply shortfalls over the past year have driven the prices of its CPUs upwards, giving AMD even more room to grow.

Against this backdrop, AMD has just launched its third-gen Ryzen 3000 series CPUs built using the second-gen Zen 2 architecture. Besides improvements to the core architecture, the big differentiators for Ryzen 3000 CPUs are a move to a whole new chiplet-style die layout, the use of a 7nm manufacturing process, the updated PCIe 4.0 interconnect, and a further 15 percent performance bump. We're going to examine all of these points.

With up to 16 cores on the top-end CPU model, AMD is not holding anything back. We'll have a full review of the first CPUs in this series, the 12-core Ryzen 9 3900X and 8-core Ryzen 7 3700X, coming out soon, but in the meanwhile, here's everything you need to know about the Zen 2 architecture and Ryzen 3000 series CPUs.

A lot of people are excited about the 16-core Ryzen 9 3950X, which will be launched later this year, but the top-end model already shipping is the 12-core Ryzen 9 3900X. These two CPUs each feature two of AMD's new 8-core “chiplets”, whereas all lower models only have one. We have two 8-core models, the Ryzen 7 3800X and Ryzen 7 3700X. Next, the 6-core Ryzen 5 3600X and Ryzen 5 3600 make up the value tier. None of these models feature integrated graphics processors, which is one key factor that still separates AMD from Intel.

The 12-core Ryzen 9 3900X will cost around Rs. 42,470 including taxes in India. AMD is positioning it against Intel's top-end 8-core Core i9-9900K, which was selling for as much as Rs. 60,000 earlier this year but has come down to a more palatable Rs. 40,500. These prices are roughly in line with the official $499 price that both share plus 18 percent tax in India, so don't expect much further reduction.

This means that Intel surprisingly has the price advantage in India, at least slightly, but AMD does claim superior performance in single-threaded and multi-threaded workloads, as well as better power efficiency. AMD's Ryzen CPUs also offer a bit of value in the form of the included Wraith coolers, which we like a lot, while Intel only bundles simple cooler with its lower end models and none at all with high-end ones.

As for how all these CPUs stack up, AMD claims that compared to the top-end previous generation Ryzen 7 2700X, the Ryzen 5 3600 is 9 percent faster and the Ryzen 9 3900X is 21 percent faster in Cinebench R20's single-threaded test. This is a single example of a best-case scenario, but it indicates solid gains across the board. Of course we'll be testing all of AMD's claims as part of our upcoming review.

However, AMD has also launched the Ryzen 3 3400G and Ryzen 3 3200G at the same time. The G on the end means that these chips do have integrated graphics capabilities, which AMD classifies as APUs, or Accelerated Processing Units. It's important to note that these chips use the previous-generation Zen+ CPU and Radeon Vega graphics architectures, so despite their name and the timing of their launch, they don't offer all the same benefits of the third-gen Ryzen family.

The same goes for AMD's Ryzen 3000 APUs for laptops, launched in January this year, and we hope that AMD can avoid this blurring of lines in the future.

Inside the Ryzen 3000 series ‘Zen 2' architecture

AMD's Chiplets are tiny modular, self-contained CPU dies with their own L3 caches, designed and manufactured around an industry-leading 7nm fabrication process. They share space on the CPU package with a separate, self-contained IO die, which is where the device's memory controller and interface, PCIe links, hardware security, and other connectivity logic are all located. The IO die is manufactured at 12nm because it doesn't need the added complexity or density that 7nm entails.

What's most impressive about this is that AMD has completely changed how its CPUs are built, but has retained the same Socket AM4 interface as all previous Ryzen desktop CPUs, allowing for drop-in upgrades on nearly every existing motherboard – there are caveats, but more on that later.

Each Core Chiplet Die (CCD) contains 8 cores clustered into two four-core Core Complexes (CCX). Each core supports simultaneous multi-threading. The L3 cache size has doubled from 16MB to 32MB per CCD, and AMD says this is entirely thanks to the increased density afforded by 7nm production.

If you want to extract the maximum possible performance through overclocking but are wary of doing it manually, AMD's Ryzen Master software has a Precision Boost Overdrive setting. This will run your CPU at or closer to its maximum boost speed for longer – at the cost of a voided warranty – to the extent that your motherboard and cooler are robust enough to handle the additional power draw and heat. There's also an Auto OC setting that can be used in conjunction to push the boost clock up by 200MHz, with next to zero effort or knowledge required.

One interesting fact is that AMD has worked with Microsoft to improve the Windows 10 process scheduler. Starting with the Windows 10 May 2019 Update, the OS is now aware of Ryzen CPU topologies which means it can target threads to specific CPU cores. Windows will now prefer cores within the same CCX, reducing cache access latency.

Windows will also now let the CPU itself handle rapid clock speed adjustments based on workload, cutting response time dramatically and making power management adjustments about 20 times quicker. The first change applies retroactively to all existing Ryzen CPUs, while the second is specific to Zen 2.

You might see the word ‘Gamecache' used in AMD's spec sheets and promotional materials, but this is just a marketing term that the company has decided to use because larger caches have a significant effect on gaming performance. For example, you might see the Ryzen 9 3900X is listed with a 70MB Gamecache, which is nothing more than the sum of its 6MB L2 cache and 16MB L3 cache per CCX, i.e. 6MB + 64MB.

The logic is that the additional cache capacity enabled by the 7nm process greatly reduces the need for the CPU to reach out to much slower system RAM. AMD points out that people spend money on higher speed RAM to boost performance, and sys its increase in cache capacity delivers even more significant gains. AMD will only be using this terminology in “select markets”, which we think might wind up creating confusion.

Official memory support goes up to DDR4-3200, with a 128GB maximum capacity using four 32GB modules in two channels. ECC memory is not officially supported but motherboard vendors can implement it. AMD says you should have no problem running DDR4-4200 RAM and it has already seen overclocks of up to DDR4-5100.

AMD also says its 7nm manufacturing process makes the Zen 2 architecture's performance per Watt up to 75 percent better than that of Zen+ (the Ryzen 2000 series) and up to 58 percent better than Intel's 9th Gen Core CPUs. Clock speeds are higher, and of course you get up to twice as many cores within the same CPU package size compared to Zen and Zen+.

Ryzen 3000-series chips are interesting enough on their own, but there's even more to discuss on the platform level. AMD is introducing PCIe 4.0, which doubles the effective bandwidth of PCIe 3.0, as the backbone of communications between the CPU and various parts of the motherboard. This standard is long overdue but it's ready for mainstream use now, and AMD is the first to implement it.

The PCIe standard is fully backwards compatible, with each new generation roughly doubling speed. The data transfer rate has gone up from 8 GT/s (Gigatransfers per second) per lane with PCIe 3.0 to 16 GT/s. That means an 8-lane PCIe 4.0 link is equivalent to a 16-lane PCIe 3.0 link.

Doubling bandwidth means that you can spread lanes around to more devices, or have faster ones. The first shipping PC components to take advantage of PCIe 4.0 will be graphics cards, SSDs, and networking devices. AMD's own Radeon RX 5700 and RX 5700 XT, launching alongside the third-gen Ryzen CPUs, support PCIe 4.0 and so do some Radeon Instinct accelerators launched a while ago (but the Radeon VII doesn't).

We saw a variety of PCIe 4.0 SSDs at the Computex trade show this year, and models from Corsair and Gigabyte should ship very soon, delivering around 5000MBps sequential speeds. We even saw Gigabyte demonstrating four SSDs at full bandwidth on a single PCIe 4.0 carrier card, pushing over 15000MBps sequential reads and writes. That kind of speed, plus Gigabit-class networking, could be transformative for some workloads.

However, PCIe 4.0 signalling is complicated and expensive to implement. In order to harness it, you'll need a new motherboard with AMD's X570 chipset. Ryzen 3000-series CPUs might be socket-compatible with older motherboards, but they'll simply fall back to PCIe 3.0 link speed. Earlier attempts by motherboard makers to implement PCIe 4.0 on X470 models through BIOS updates have been quashed by AMD in order to avoid confusion and instability.

All major motherboard manufacturers have already showed off their X570 lineups. Asus, Gigabyte, MSI, ASRock and Biostar have units in the market already, but they're all expectedly high-end and expensive. You'll also notice that nearly every X570 motherboard has a chipset fan – something we haven't seen in many generations. This is slightly disappointing as it's one more point of potential failure in a PC. It's one more thing to keep clean, and one more thing that might create noise.

AMD said that Socket AM4 would last till at least 2020, and this has proven to be true. You can use your third-gen Ryzen 3000 CPU with an X570 motherboard or a previous-gen X470 or B450 model, while support for the first-gen X370, B350 and A320 will depend on motherboard manufacturers and might not come to all models. You can look for a BIOS update for older boards already in use, and those in the market will have a label stating “AMD Desktop Ryzen 3000 Ready” if they're already factory-updated. Note that X570 motherboards will generally not support first-gen Ryzen CPUs (including the Ryzen 3 2200G and Ryzen 5 2400G APUs).

That's a lot of information, but we haven't even begun to dig into the actual performance of AMD's latest consumer desktop CPUs. Stay tuned to Gadgets 360 for our full review of the 12-core AMD Ryzen 9 3900X and 8-core Ryzen 7 3700X, coming up soon.