"If You Don’t Have Haters, You Aren't Doing Anything Right," Alienware VP on Designing the New Area-51m and More

At CES 2019, Dell was one of the few PC manufacturers to showcase some truly innovative products, off which, our favourite has got to be the Alienware Area-51m gaming laptop. It's wasn't the flashiest, biggest, smallest, or even remotely the wackiest looking laptop at CES, but what got us excited was the fact that for the first time (in a long time), we got a gaming laptop with upgradable processor and graphics card. This makes it as close to a desktop-replacement as one could hope for, which in itself should get any PC gamer excited, since most traditional gaming laptops don't let you upgrade the CPU and GPU as both components are soldered onto the motherboard.

The Alienware Area-51m is a homage to the 2003 laptop with the same name that also featured a desktop CPU and a swappable graphics module, but the idea has all but gone out of fashion — until now.

Gadgets 360 caught up with Frank Azor, Vice President and General Manager Alienware, Gaming and XPS at Dell after the company's keynote at CES 2019 in Las Vegas last week. We begin by taking about the new ‘Legend' design language, which is really the cornerstone of the Area-51m and other future Alienware products.

“It typically takes us about 18 or so months to develop a new platform," explains Azor. "The challenges were enormous. We first challenged the team to build the world's most powerful gaming notebook and they did a pretty good job in delivering an architecture…but what we really thought would surprise folks is if we could make it upgradable, similar to the desktop-replacement notebooks we originally started building 15-or-so years ago."

The laptop's new design is a more toned-down version of Dell's existing Alienware lineup, with curves and soft colours replacing the sharp, angular lines and the perpetually black motif. And with good reason.

"Today we have a significant female gaming community," says Azor. "Now, pretty much every gaming product that has been designed is targeted to a male demographic. It's not softened up necessarily, but between the colour combinations and the way in which we're integrating the AlienFX lighting [on the Area-51m], the design tested much more favourably with female gamer audience than any other previous designs we had done and that was on purpose. We picked the right design that would test more favourably with a female audience.”

Some hardcore Alienware fans might be turned off by the Area-51m's slightly softer design cues but Azor has a valid point. If these statistics are anything to go by, women account for nearly 45 percent of the gaming crowd in the US and considering it's one of Dell's primary markets, it would be silly to alienate (pardon the pun) such a rapidly growing audience.

Another reason for this new design direction, according to Azor, is that everyone is creating similar looking products these days, with LEDs and aggressive looks being the staple. It's created a “sea of sameness,” as he puts it.

“We want to be polarising, we want people to say — I love that or I hate that. If you don't have haters then you're not doing anything right,” he says.

But cosmetics aside, what really sets the Area-51m apart is the way in which the internal components are designed and laid out.

“They [the team] really had to think about how to make all the components accessible from the bottom of the notebook," he says. "How do they design it in a way so that components would actually be modular and removable like the graphics card. So we had to leverage some technology that we had from the commercial side of the business called DGFF [Dell Graphics Form Factor],” explains Azor.

Fitting desktop-class components into a laptop also posed another challenge in terms of power management. The Alienware Area-51m has two power sockets and ships with two power adapters, with the wattage of each varying based on the configuration you buy. Azor tells us that the laptop is capable of running regular operations and gaming on a single power adapter but for overclocking or using the “max performance” mode, you'll need the second one too.

We now come to the custom graphics card or GPU, which is the most essential component of any gaming machine. Unlike the CPU, which is a standard socketed desktop part, the Alienware Area-51m uses the mobile version of Nvidia's new GeForce RTX 20 series GPUs.

Azor says that the GPUs have been overclocked so we should expect desktop-level performance. The custom GPUs were all designed in-house.

“We worked with Nvidia, they approved the design, validated it, tested it — all of that, but it's entirely our proprietary design,"Azor says. "MXM is not longer an industry supported design, it's been abandoned so we weren't able to leverage that so we had to create our own.”

A custom design essentially means you're dependent on Dell for things like servicing and future upgrades. As of now, the Alienware Area-51m only supports Nvidia graphics modules, but what about AMD?

“None that I can talk about right now,” is all Azor is willing to say.

The new design is also said to be user-upgradable, which means you won't have to run to the service centre for upgrades.

“We've made it very simple actually. When you remove he bottom cover, there's information about what screws you need to remove [and] what size of the screws are. It's very intuitive,” says Azor. “Customers can then either upgrade it themselves or they can buy it with a service plan from us and we can send an on-site technician to service it for them,” he adds.

Dell will soon add ‘upgrade kit' options on its website, which users can purchase for this laptops. The kit is said to contain all the necessary instructions and additional materials like thermal paste and any adapter or modifications that might be needed for fitting the new GPU into the Alienware Area-51m.

But what about the future? A gaming desktop typically lets you upgrade to the next generation of components, so you can keep up with the current crop of games. Will the Area-51m support future GPUs too?

“It's absolutely our intention but we can't commit to it yet,” says Azor. “We don't have those future designs yet, to be able to vet them and evaluate them to say they will be supported. We're not there yet. When we get those designs from Nvidia and AMD, we will be able to tell folks yes or no.”

The fact that Azor mentions AMD here could hint that the team is possibly working on that option and it may just be based on the GPU maker's upcoming Navi architecture.

“We've designed the system with enough variability within it [to] accommodate a fairly broad spectrum of engineering changes," he says. "There's room in there to maybe take in a slightly larger GPU, a taller GPU…there's thermal headroom in there. Today, it's used for overclocking but if the next generation ends up being higher TDP, then we've got a significant amount of thermal headroom to play with."

As powerful as the Alienware Area-51m might be, we did find a couple of features that are conspicuously missing. For a no-holds-bar gaming laptop, the 17.3-inch display only scales up to a 1080p or full-HD resolution, which strikes us as a little odd considering the company's other Alienware laptops have 4K resolution options.

Azor says this is because 17-inch panels with narrow borders are available in only full-HD resolution at the moment, though he reveals that higher resolutions "will be coming towards the end of the year."

The absence of an SD card reader also struck us as slightly odd. We get that it's a ‘gaming' laptop but most people would typically want to use it for general tasks too, other than playing games.

“It's not a priority item on our list,” says Azor. “We look at the data as to how our customers are using our products and very rarely do our gaming systems get SD cards plugged into them."

We're not entirely convinced about Dell's decision here, but it is what it is. 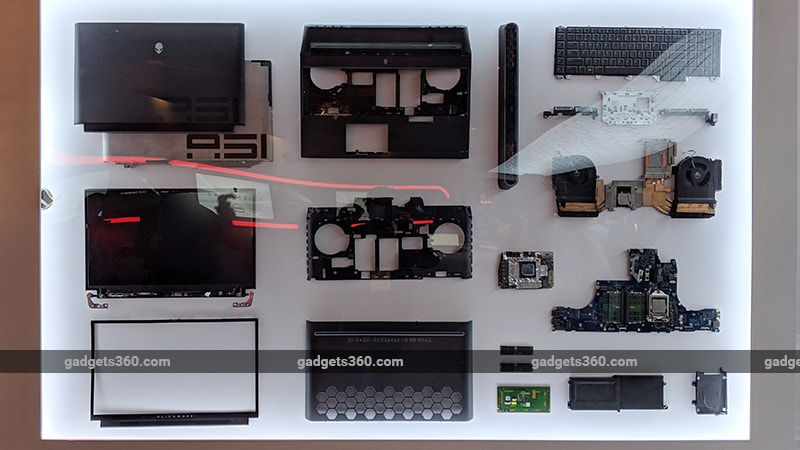 The Alienware Area-51m in its disassembled form, showing off all the components inside

The Alienware Area-51m is certainly one of Dell's most ambitious projects yet. Though given its high starting price and the fact that those custom graphics modules will cost you a pretty penny when time comes to upgrade, it's not going exactly going to fly off the shelves. Azor is in agreement on this.

“It's not going to move numbers," he says. "Honestly, the Area-51m will sell, it will do well. It's a good product and we hope to support it for a long time, but this is not a system that sells millions of units. It's expensive and the value proposition of it appeals to the most discerning performance centric enthusiasts out there."

Dell will slowly transition all of its Alienware products to this new ‘Legend' design language. The company already demoed its upcoming 55-inch 4K OLED gaming monitor at CES, which is the first non-laptop product to use the ‘Legend' design.

“We chose to feature this design on the most extreme products we have and then over time, it will trickle down to the lower price-band products,” he says.

In part two of this interview — out on Thursday — we touch upon Dell's other gaming launches like the new Alienware m17 and the new, overhauled G series laptops with Azor. We also speak to Justin Lyles, who's the VP of Consumer Design at Dell and get his perspective on Dell's new design language across verticals as well as the challenges that went into designing their smallest-ever webcam for the new XPS 13 laptop.

Further reading: Dell, Alienware Area-51m, Frank Azor, CES, CES 2019, Alienware
Roydon Cerejo Email Roydon Roydon Cerejo writes about smartphones and laptops for Gadgets 360, out of Mumbai. He is the Deputy Editor (Reviews) at Gadgets 360. He has frequently written about the smartphone and PC industry and also has an interest in photography. With over a decade of experience covering the consumer technology space, he is also an avid sci-fi movie and TV show geek and is always up for good horror flick. Roydon is available at roydon@gadgets360.com, so please send in your leads and tips. More
Tesla Model 3 a Prize in Pwn2Own’s First Automobile Hacking Contest
'First Battery-Free Bluetooth Sensor Tag' Arrives, Harvests Energy From Radio Frequencies

"If You Don’t Have Haters, You Aren't Doing Anything Right," Alienware VP on Designing the New Area-51m and More
Comment