Traditional Laptops Are Not Selling, but Gaming and VR Hold Promise, Says Acer 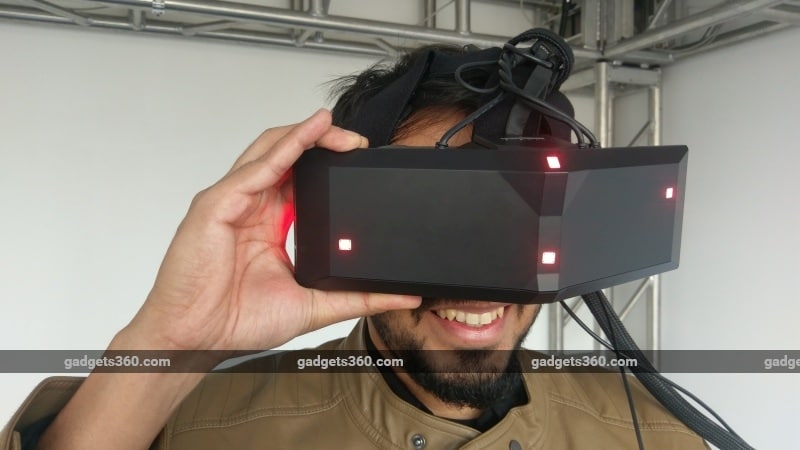 If you’re looking for the ultimate immersive experience, nothing really cuts it like Virtual reality (VR). Even the biggest IMAX screen and the best audio system in the world probably won’t be able to mimic that sensation.

Virtual Reality (VR) today ranges from inexpensive devices like Google Cardboard, which will work with almost any smartphone and costs less than Rs. 1,000, to higher end products like Samsung’s Gear VR and Google’s Daydream VR which work with a limited range of smartphones. Then there are full-blown VR devices like the Oculus Rift and HTC Vive, which provide a higher quality VR experience powered by high-end PCs.

Despite having been "around the corner" for a few years now, VR hasn’t really taken off yet since mobile VR headsets are limited by the power of the device and the apps available, while on the higher-end, the prices are currently too high for most to make that sort of commitment. This isn’t even accounting for the high-end PC hardware you’ll be investing in, just to power your headset.

Many companies feel that VR might have a better (faster) chance of gaining mass acceptance in the commercial space, which is an area where Acer is also betting big on. At its Next@Acer event in New York last month, the company showcased a bunch of new products and product lines, along with its plans for VR in the commercial space and at home. Acer and Starbreeze studios, a content creation company, have a joint venture called StarVR. They're offering a VR headset that provides a 210-degree field of view, and a resolution of 1440x2560 pixel resolution per eye, higher than anyone else in the market right now.

Gadgets 360 had a chance to try out StarVR at Acer’s event, which was incredibly fun and left us wanting more. While we didn’t spend a lot of time with it, we did get to try out two five-minute demos of a movie and a game. If you wear glasses then you’ll need to take them off as it doesn’t accommodate them, and there's no focus adjustment either, which is a drawback. The movie clip was interesting, but didn't offer much interactivity, as all you could do is look around the frame. John Wick Chronicles was certainly more exciting since it’s a first person shooter. There were markers on the gun and the headset that are constantly been tracked by sensors placed around the room (or tent rather) that we were in. Our motion was fairly accurately captured and even slight movements, like when we ducked around a bar counter, felt pretty real. The headset itself felt pretty comfortable, with good weight distribution so it didn't feel too heavy.

Eric Lin, COO of StarVR, told Gadgets 360 that its first IMAX VR centre - in Los Angeles, California - has been pretty successful so far. “We launched in January this year and it’s been running for four months. [We’ve] hosted over 25,000 guests and individual players from which we gained over 88 percent satisfaction rate for the centre in general and among those, the top rated experience was John Wick and the second was Star Wars," said Lin. "This has seen many people come back again and again due to its interactivity and sociability. We have gamers coming back to make sure their score is in the top 10. The centre is usually booked out through the weekends.”

VR is still a work in progress
StarVR and IMAX plan on launching more such centres in other countries this year, but India is not on this list as of now. Such centres require quite a bit of investment but as Lin points out, it varies based on location and the type of content IMAX hopes to offer. “It really depends on the service and overall package that a centre requires," said Lin. "We are working with IMAX to launch multiple centres around the world and every centre from IMAX will feature different content based on the location and preferences of each country.”

Like almost everyone in the VR space, StarVR is also under continuing development. One of the initial criticisms about the StarVR is that despite the high resolution, the images still lack in sharpness. The company is committed to the larger field of view though, which lies at the root of the problem.

“We’ve been spending over a year to fix this," admitted Lin. "It’s not very easy especially when you have the wide angle of 210 [degrees] which is way beyond the traditional technology of stitching two screens together. But we feel this offers a premium viewing experience which is why we’re investing in this technology.”

Acer also showed off its mixed reality (MR) headset, which has been developed closely with Microsoft, and is targeted at home users. The company is among the first OEMs to manufacture a headset for Windows 10 and will be launching it around the holiday season this year at about $299 (approximately Rs. 20,400). According to Acer, you currently need at least a Nvidia GTX 965M GPU to run it, but come October, it should be able to work on integrated graphics too, like an Intel Core i5 CPU (presumably 7th Gen).

Gaming comes into focus in India
While VR was a big talking point at Acer’s event, the company also showed off its brand new line of gaming laptops. The Predator Triton 700 and Predator Helios 300 are the company’s new line of slim gaming laptops. The Predator 15 and 17 will still exist as this new line up is targeted at those looking for a more portable solution without having to compromise on thermal performance. The company’s current VX series will be succeeded by the Nitro 5, which will offer budget-level gaming performance with a GTX 1050 or 1050Ti.

India is still a nascent market for Acer in terms of gaming, as Andrew Hou, President Pan Asia Pacific, explained. “Last year when we launched the very high end gaming notebook, we were very hesitant to launch in India, one reason because of the parents behaviour and second, the Predator 15 and 17 we launched was very expensive, which didn’t really fit into India’s climate," said Hou. "But this year we have all the entry and mainstream products that we can launch in India. This year we will pay more attention and be more aggressive for India as a gaming market.”

Acer currently had a wide portfolio of products in the laptop segment alone. But according to Hou, the company is consolidating its line up to be more streamlined. “When we create new Predators [laptops], actually we are consolidating on the standard clamshell notebook. If you’re familiar with Acer products, we already have the V, S, E, F series but in the future, we will only have the Aspire 1, 3, 5 and 7. We are planning on doing a consolidation on the traditional clamshell. Here, the TAM [Total Available Market] is shrinking however gaming is a segment that is growing.”

Acer also announced a new wearable called the Leap Wear, which is arriving sometime in Q3 this year and will be priced at around $139 (approximately Rs. 9,500). This is a fitness tracker that can track stamina and fatigue levels, in addition to monitoring your heart-rate. Acer hasn't yet revealed any India launch plans though.

In fact, we’ve not really seen much of the company’s smartphones and wearables in India of late, two segments that are currently in full bloom around the world. The reason for this, explains MH Wang, General Manager Smart devices, is too much saturation.

“You know that the smartphone market is really tough right now," said Wang. "Maybe one or two big companies make money while the rest struggle. We need to find a new way to do a smartphone or smart device.”