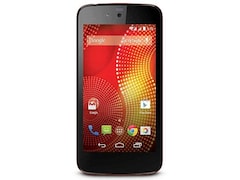 Google unveiled the Android One initiative at its annual developers conference in June with Micromax, Karbonn, and Spice confirmed as the launch partners. Under the programme, manufacturers benefit from lower cost of development, by sharing integration and testing resources with Google. Android One customers are promised regular software updates, so this sounds like a win-win, at least on paper.

Karbonn Sparkle V smartphone was launched in September 2014. The phone comes with a 4.50-inch display with a resolution of 480x854 pixels.

Karbonn Sparkle V is powered by a 1.3GHz quad-core MediaTek MT6582 processor. It comes with 1GB of RAM.

The Karbonn Sparkle V runs Android 4.4.4 and is powered by a 1700mAh removable battery.

Karbonn Sparkle V based on Android 4.4.4 and packs 4GB of inbuilt storage that can be expanded via microSD card (up to 32GB). The Karbonn Sparkle V is a dual-SIM (GSM and GSM) smartphone that accepts Micro-SIM and Micro-SIM cards.