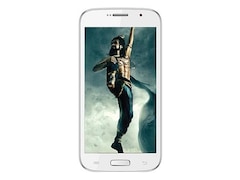 Connectivity options on the Karbonn A36 include Wi-Fi 802.11 b/g/n and FM radio.

Karbonn A36 User Review and Ratings