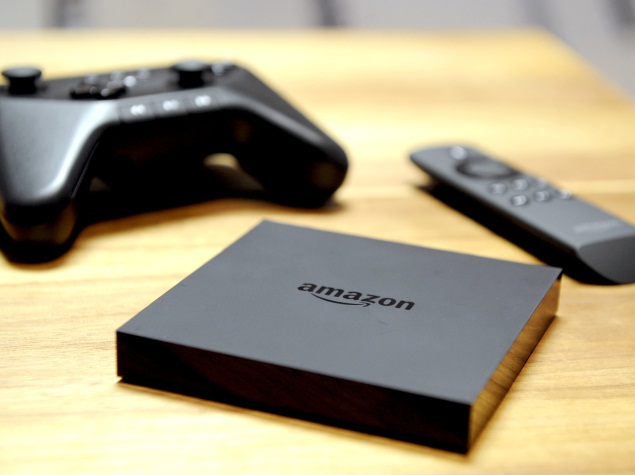 Amazon's new Fire TV streaming device shows a lot of potential in bringing together the best features from competing devices and adding voice search on top of that.

But for now, it's largely promise: Many of the best features work with only a handful of video services, which makes Fire TV (Review) primarily a showcase for Amazon's video offerings.

Amazon has aggressively expanded its video library in recent months, and is now offering its own device to view that content. At $99, Fire TV costs about the same as other full-service streaming devices, namely Roku 3 and Apple TV.

With Fire TV, you can watch video from Netflix, Hulu Plus and more if you have subscriptions to those services. If you get Showtime and ESPN through a supported cable or satellite TV provider, you can access on-demand video from those channels.

Otherwise, you can use free, ad-supported services such as Crackle, Vevo and YouTube. You can also buy video individually through Amazon Instant Video or get a selection for free through Amazon's $99-a-year Prime program.

You can listen to music, too, through Pandora, iHeartRadio and other services or play one of more than 100 games, some of which require a $40 game controller.

Fire TV offers more than 175 video, music and game apps, but that pales compared with the more than 1,000 available through Roku. Still, it beats the few dozen offered by Apple TV.

Notable omissions in Fire TV's app store include HBO Go, PBS and Apple's iTunes. Major League Baseball, ABC and the Disney Channel are coming soon. Apple TV already has all that, but it doesn't offer Amazon Instant Video directly on the device.

Fire TV, like Apple TV, allows in-app purchases, so you can sign up for Hulu Plus right from the TV and have the monthly subscription fee billed through your Amazon account. But for now, this works only with a handful of services. Netflix isn't one of them. Apple requires all apps to support that so you don't have to pull out your credit card each time.

Fire TV also lacks the interface consistency that Apple insists on. That means on-screen keyboards, layouts and search tools vary from app to app. With Apple TV, all apps share a common look and feel so you don't waste time figuring out what's where.

Amazon's device trumps Roku in keeping audio and video in sync most of the time. I've found that to be a problem with most streaming devices, with Apple TV being the notable exception.

What sets Fire TV furthest apart from competing devices is its voice search. Just speak the title, actor, director or genre into your remote, and Fire TV shows matching content on the TV. There were a few laughable errors. The device searched for "How I Met Your Brother" and "Holly Met Your Mother" when I asked to see the popular sitcom "How I Met Your Mother." But mostly, voice recognition worked well. 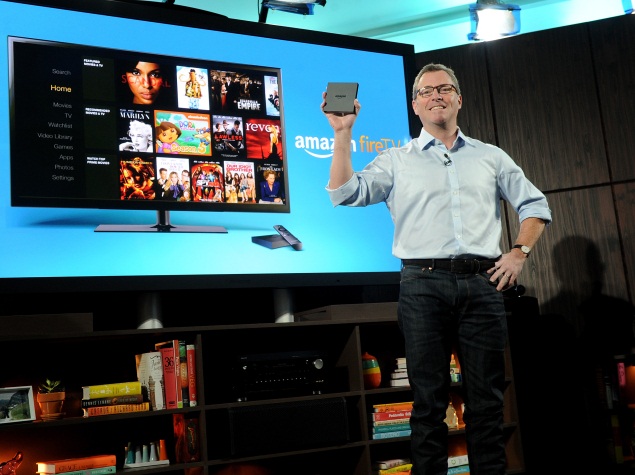 Unfortunately, voice search works only with a handful of apps. I was able to get content from Amazon Instant Video, Hulu Plus and Vevo, but it missed Netflix and others. Searching "House of Cards" got me season 1 episodes available for purchase through Amazon, even though Netflix had those for free, plus season 2.

Furthermore, the search is rudimentary. Speaking "Sabrina: The Teenage Witch season 4" just got me the entire show, starting with season 1. The voice search recognizes titles of individual episodes, but it'll take me to the show's main page.

You can search while watching video, but that kicks you back to the home screen. It would have been nice to get just Hulu Plus video while in the Hulu Plus app.

One nice touch, though: If video is available for free on Hulu Plus, the search will steer you there, even if Amazon's trying to sell it. Amazon says it hopes to expand that to all other apps.

If you have Amazon's Kindle Fire HDX tablet, you can start video there and switch the feed to the TV. That frees up the tablet screen for supplementary content from Amazon's IMDb video and celebrity database. You can also check email and Facebook. It's akin to Apple's AirPlay feature for iPhones and iPads.

Fire TV is easy to set up, especially if you buy it through Amazon and have your device pre-registered to your account. Just plug the device into an outlet and connect it to the TV with an HDMI cable, which isn't included. You can get on the Internet through Wi-Fi or connect an Ethernet cable - again, not included.

The device is about the size of a double-album plastic CD case. That takes up more desk surface than the Roku 3 or the Apple TV, but it can be placed out of the way, even in a desk drawer. That's because the Fire TV's remote control connects with the device using Bluetooth wireless technology rather than infrared signals, so you don't need a direct line of sight. 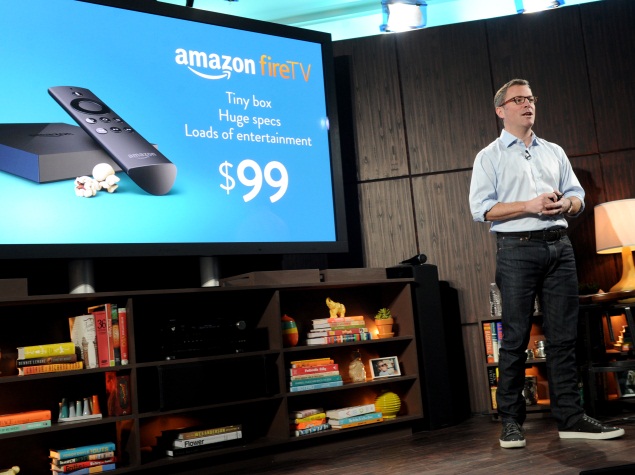 Roku 3 (Review) uses Wi-Fi and doesn't need a direct line of sight either. Its remote has a headphone jack that captures audio from shows wirelessly, so you can watch late at night without disturbing others. Fire TV doesn't have that.

As stated previously, Fire TV is comparable in price to the Roku 3 and the Apple TV. Roku has cheaper options, for as low as $50, though it's worth paying $100 for a faster processor and other benefits. Meanwhile, Google Inc. has a $35 streaming device called the Chromecast (Review). It's more of a conduit for flinging video from your phone or tablet to your TV. It's more cumbersome to use than a stand-alone streaming device, and it works with relatively few apps.

With Fire TV, you can stream personal photos and video stored on Amazon's Cloud Drive. A software update coming next month will also give you access to personal music files and to parental controls.

And that goes back to the idea of Fire TV being largely about promise. Many features aren't ready yet, and the ones that are don't work yet with every service.

Fire TV is a good investment if you use a lot of Amazon content, but you'll need patience for features to arrive or get better.