It's almost impossible to avoid Hotstar if you're a sports fan living in India. Star Sports, the TV network that owns Hotstar, has the rights to broadcast international cricket matches held in India and even those taking place in countries such as Australia. It also has the rights to broadcast English Premier League football, Bundesliga (German football), apart from professional league tournaments for sports such as kabaddi, football (ISL), badminton, and hockey.

Not everyone has a TV set at home, and pretty much everyone has a phone with Internet these days, so the Hotstar app has become the go-to app for live streaming sports. It has over 50 million downloads according to its Google Play page, showing how popular the app already is, less than two years after launch.

On the face of it, Hotstar offers tremendous value. You can watch plenty of stuff (especially sports) for free. Cricket matches are almost always available on the free tier and the only con is that the feed is five minutes behind the game. The delayed feed is a perfectly acceptable compromise considering you are not paying anything.

If you pay Rs. 190 per month, you get to watch all available games live and you can even access Hotstar's impressive library of films and TV shows. This includes a large number of shows and movies aired on Star's TV channels and the international catalogue includes HBO shows such as Game of Thrones. 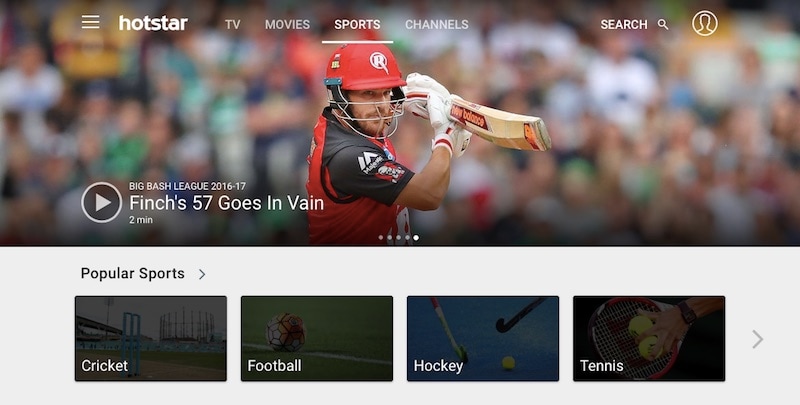 Even though I'm a big sports fan, I'd been avoiding a Hotstar subscription since the beginning. I thought I could get the same content on Star Sports channels. Star has four channels for sports and I didn't see a reason to get Hotstar as everything I wanted to watch (cricket and football) aired on those four.

Our 5 Favourite TV and Movie Streaming Services in India

Then late last year, the company decided to remove Premier League football from its regular channels and moved them all to two new HD channels - Star Sports Select HD 1 and 2. The company probably felt that Premier League matches weren't being watched by many people and those who watch it can afford HD channels or Hotstar so it moved them away. Now sometimes we have Star Sports 1, 2, 3, and 4 - and their HD versions - broadcasting the same ISL (Indian Super League football) match while EPL matches are only Star Sports Select HD channels.

Subscribing to the new HD channels is not an option for me since we don't have an HD box at home and spending over Rs. 3,500 to get a new set top box and paying twice the price to get HD TV channels doesn't make any sense to me. That's how I turned to Hotstar. I thought the service is good, based on whatever my friends said about it, so let's go all in. I was wrong.

Hotstar won the Apple TV app of the year award in 2016 and I installed the app on my Apple TV, and signed in to activate premium content. The first thing I tried to watch was an Australia vs Pakistan test cricket match and it turns out that the live feed is not available on the Apple TV. You can watch the game live on your smartphone or PC but not on the Apple TV. I had to watch the delayed feed, which meant I was effectively an over or two behind the match. 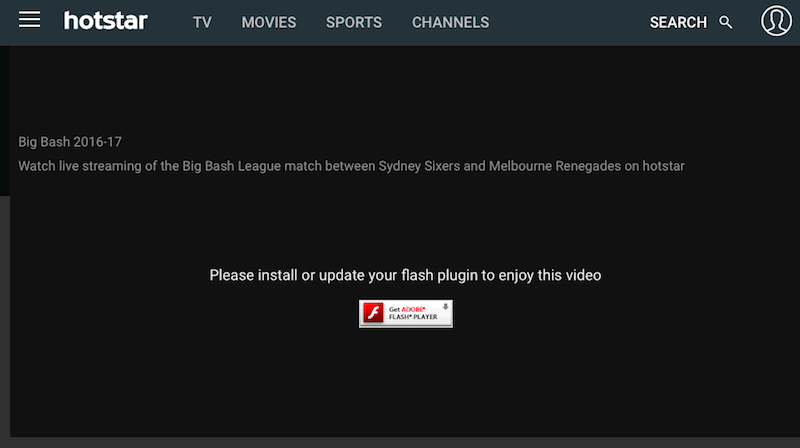 After every over, Hotstar showed an increasingly annoying "download Hotstar" ad or a "watch this new Hotstar show" ad. First of all, when this is marketed as a premium service for which I'm paying Rs. 190 every month, why should I be forced to watch ads? Hotstar's social media team claimed that this is due to the "live feed" that can't be changed but that sounds like a hollow excuse. The onus is on Hotstar to provide a premium, ad-free experience but sadly it doesn't.

I find it hard to believe that the people who run Hotstar ever watch a test match on the app. I understand that no one wants to advertise during an Australia vs Pakistan test match that's being broadcast in India, but that is no excuse to show "download Hotstar" ads. I have already downloaded Hotstar and I have paid for the premium subscription, so why do you want to ask me to download Hotstar?

I think Hotstar should offer separate subscription packages for sports and entertainment. I'm one of those people who couldn't care less about any Hotstar original shows. I'd probably watch one or two of the shows Hotstar has and at most five movies. Being shown ads for other Hotstar shows when watching test cricket is another reminder of the second-class experience on offer for sports fans. It feels like Hotstar is trying to please everyone and ending up irking a section of its subscribers.

Frustrated with the Apple TV experience, I opened Safari browser on my Mac and tried to stream a match, and guess what. Hotstar runs on Adobe Flash. In an age when almost everyone has moved on to HTML5 videos, Hotstar still needs the slow and vulnerable Flash plugin. To top it off, half the website doesn't even have https encryption. It uses an unencrypted http page for sign in, but if you try to subscribe it switches to encrypted https pages.

All of this made me feel that Hotstar isn't really taking live sports streaming seriously. I'd be glad to pay Rs. 200 a month just for ad-free live sports streaming even without all the entertainment on offer. The goal should be to offer a service every sports fan would want to pay for. However, at the moment it's far from that. There's no reason why premium subscribers on Apple TV don't get live feeds for some matches and the company needs to find a way to remove ads entirely for paying subscribers. Right now it feels like the people who watch Hotstar for movies and TV shows get an awesome, ad-free experience while sports fans get the short end of the stick.

Until that changes, I'm going to continue watching cricket on SD TV channels and I'll catch football games at friends' homes or just skip them altogether. Either way, I refuse to pay for the sub-par live sports experience Hotstar currently offers.