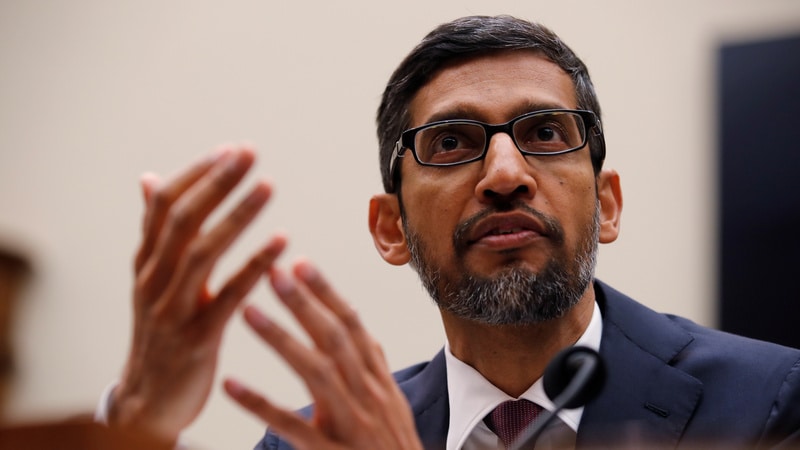 His voice was so quiet at times he could barely be heard across the chambers of the House Judiciary Committee, and he faced a firing line of dour lawmakers, some of them intent on hammering the tech giant for alleged political bias.

"He didn't make any enemies here today," said Daniel Castro, vice president of the Washington think tank Information Technology and Innovation Foundation. "The people who were here trying to rattle him weren't able to do it. Google came out unscathed."

Pichai was the measured, mild-mannered political tenderfoot in a sea of Washington bombast, not showing agitation at the silliest of questions or taking his interrogators' bait.

And after the hearing, with the high-stakes showdown behind him, one of the most powerful executives on the planet couldn't help but smile. The two mock hearings in California and Washington he had sat for in preparation were a little less tough, Pichai said with a soft laugh later, following an interview at The Washington Post.

In Silicon Valley, Pichai, 46, is as close to rock-star royalty as one can get: an India-born engineer who rose through the ranks to helm one of the world's most powerful tech empires.

In a culture that worships innovation, he is revered as a special type of technical-minded billionaire, more likely to rhapsodize about the profundity of artificial intelligence than pore over the details of a balance sheet.

Yet in Washington, Pichai has effectively been a nonentity, and Google - the town's biggest corporate lobbyist - has had to do its politicking without his presence. Indeed, neither he nor Google's co-founder Larry Page testified at a Senate committee hearing in September. Instead, Google was represented by an empty chair.

Tuesday's hearing was designed from the jump as a scene of performative political outrage at Big Tech, which has spent much of the year as a punching bag over claims of anti-conservative bias.

The hearing was crashed by longtime Trump crony Roger Stone and far-right conspiracy theorist Alex Jones, who called Google "the most horrible corporation on earth" to anyone in the halls willing to listen.

A man dressed as the mascot of the game Monopoly, Rich Uncle Pennybags, sat quietly in the crowd, peering through a monocle. Another protester opened the hearing-room doors and flashed a sign with Google's name in the Chinese flag - a silent criticism of the company's ongoing development of products that could align with the desires of the surveillance state.

The demands from a phalanx of lawmakers - skewed heavily toward stern-faced, old, white men - ranged from prosecutorial cross-examinations to questions more likely to be expressed by old uncles seeking tech support from young kids during a Thanksgiving gathering.

Rep. Zoe Lofgren, D-Calif., asked Pichai why a Google search of the word "idiot" had brought up images of President Trump. And Rep. Steve King, R-Iowa, asked him to explain why his seven-year-old granddaughter's iPhone had acted strangely. "Congressman, the iPhone is made by a different company," Pichai said quietly.

Ed Black, president of the Washington tech advocacy group Computer & Communications Industry Association, said afterward, "He withstood it with a degree of stoicism that I would have to strain to match."

After it all, Pichai proved to even his critics to be a master of deflection, capable of gliding past tough questions and consistently hitting talking points - saying a lot while conveying very little.

That allowed him to walk out of the hearing with Google's mission accomplished: no major gaffes, no embarrassing sound bites.

Pichai left the hearing through a small press scrum, thinned by the latest scandal emerging from Trump's Oval Office. As for Rich Uncle Pennybags, the man who had practically dominated the camera footage behind him? Pichai said later he'd never seen him.