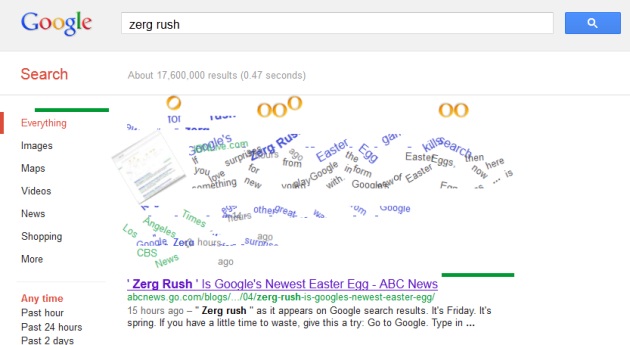 Highlights
Bored with Google doodles, then you should look at the latest easter egg from the search giant. Just type 'Zerg Rush' in Google search box and watch the 'O's eat up all your 'Zerg Rush' search results.

Based the strategy game tactic of 'rush', in which an attacking player quickly builds a large number of units early on in the game with the motive of overpowering the opponents before they can defend themselves. By doing this the attacking player catches his opponent off-guard and cripples it.

Google's new easter egg takes its cue from the famous game StarCraft, in which a Zerg player uses the Zergling rush.

You can also fight with the evil 'O's in this easter egg by clicking on them several times, take out as many as you can. You can then share your score on company's social network Google+. Once the animation finishes, you are rewarded with "G.G.", which is the shorthand for 'good game'.

Easter eggs are the hidden treats left by the Google coders to make searching a little fun. You can also try out other famous easter eggs like "Tilt," "Anagram", "Do a Barrel Roll" or even the "Let it Snow."