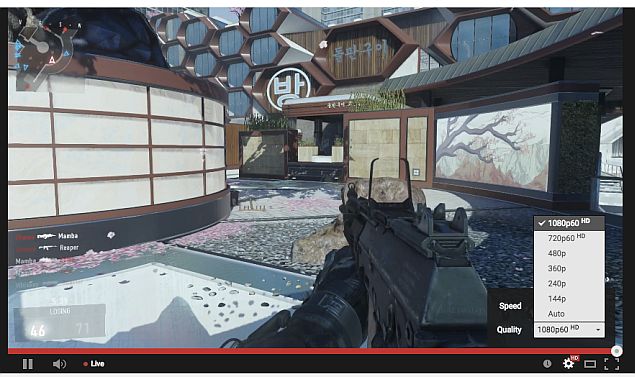 Announcing the news, YouTube's Alan Joyce, Product Manager, said on the official blog that 60fps live-streaming is now available as an early preview on HTML5-compatible browsers such as Safari, Chrome, Internet Explorer, Firefox, and Opera. This comes as no surprise as YouTube at the beginning of this year ditched Adobe Flash for video delivery in most Web browsers in favour of HTML5 as its default platform. The move is certainly part of the company's bid to take on Amazon-owned Twitch's dominance in the gaming and e-sports live-streaming segment.

A YouTube Spokesperson stressed on the new need of HTML5 to VentureBeat and said, "With live streaming in general, we're focusing on the HTML5 player, as we think it provides the best experience." Further adding, the company said that the HTML5 player supports variable speed playback allowing

With the new rollout, any live stream on YouTube at 60fps will be transcoded into stream of 720p60 and 1080p60, which will show up smooth playback for gaming and fast paced video. "We'll also make your stream available in 30fps on devices where high frame rate viewing is not yet available, while we work to expand support in the coming weeks," said Joyce.

The company even added, "Any app using our live streaming API can add a new high frame rate flag to enable 60fps streaming."

"These are the latest in a series of improvements we've been making to live streaming on YouTube and there are plenty left to come, so stay tuned for more very soon," said Alan Joyce, Product Manager, YouTube.

Back in March, YouTube was reported to be set to re-launch its live-streaming platform with focus on gaming and sport. The support for 60fps live-streaming is certainly a first step to this goal.

In other news, Android Police points out that 60fps video playback arrived has finally arrived on YouTube Android app. The 60fps support for mobile app seems to have currently rolled out to limited users and a broader rollout can be expected soon.

The company last year rolled out the 48fps and 60fps video playback support for its videos on desktop via compatible browsers.