Yahoo did not disclose the financial terms of the deal to buy Lexity, a four-year-old company specializing in software applications that help small businesses attract and service customers.

"We've been humbled by the overwhelming positive response," Kumar and his team said in a blog post.

"We are excited to join forces with Yahoo and to continue building on our vision."

Lexity applications will continue to operate as independent offerings.

"We will continue to support the current platform, the Lexity Live app, existing customers, and third party apps and developers," Yahoo said.

"In the near future, we plan to integrate the service with the Yahoo Small Business offering."

The acquisition continues a shopping spree launched after Mayer became chief of Yahoo a year ago.

Yahoo's growing list of acquisitions includes Qwiki, a New York operation behind an application that converts video and pictures on iPhones into sharable movie clips complete with music soundtracks.

Yahoo has also bought Xobni, a startup behind tools for better managing contact lists and email inboxes, and Bignoggins Productions, a one-person operation specializing in fantasy sports applications for iPhones.

Yahoo in June completed a billion-dollar deal taking over the popular blogging platform Tumblr, a move aimed at bringing more youthful users into the company's orbit.

Since former Google executive Mayer became chief at Yahoo, the company has snapped up an array of startups including GhostBird, Alike, Stamped, Snip.it, and a Summly application built by a British teen.

Mayer's plan for reviving the fortunes of the faded Internet pioneer includes making priorities of mobile devices, video, personalized digital content, and elevating the company's popularity outside the United States. 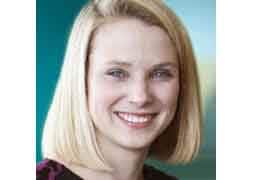