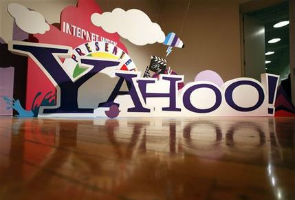 More than 400,000 Yahoo Inc user names and passwords were stolen and published on the Web, putting other websites at risk as well, after hackers exploited a vulnerability in Yahoo's computer systems.

Some logins for Google Inc, AOL Inc and Microsoft Corp services were among those compromised. The three companies said they required affected users to reset passwords for sites including Gmail, AOL, Hotmail, MSN and Live.com.

Yahoo issued a statement apologizing for the breach, the latest setback for a company that has lost two chief executives in a year and is struggling to revive stalled revenue growth.

Chairman Alfred Amoroso acknowledged that Yahoo had experienced a "tumultuous" year at its annual shareholder meeting on Thursday morning. Interim CEO Ross Levinsohn told attendees he was optimistic about the company's progress.

The breach prompted criticism from security experts who said that a major Internet firm like Yahoo should do a better job at protecting user data.

As an example, he noted that the hackers were able to produce more than 400,000 cleartext passwords within a day. That indicates that Yahoo either did not encrypt them at all or used an encryption method that was easy to crack, he said.

The professional networking service LinkedIn recently came under similar criticism. Security experts chided the company for failing to use sophisticated encryption practices to secure its passwords, millions of which were released following a breach last month.

What happened?
Yahoo spokeswoman Dana Lengkeek said "an older file" had been stolen from Yahoo Contributor Network, an Internet publishing service that Yahoo purchased about two years ago. It helps writers, photographers and videographers to sell their work over the Web.

"We are fixing the vulnerability that led to the disclosure of this data, changing the passwords of the affected Yahoo! users and notifying the companies whose users' accounts may have been compromised," she said.

Other firms whose customers were at risk include Comcast Corp, Verizon Communications Inc and AT&T, Rapid7 researcher Marcus Carey said. He estimated that tens of thousands of accounts of users of services other than Yahoo were affected by the breach.

AT&T and Verizon did not have any immediate comment. Officials with Comcast could not be reached.

AOL Senior Vice President David Temkin said spammers typically use credentials like the ones stolen from Yahoo to break into email accounts and use them to send out spam.

"In this case, I think we actually got ahead of it before the people who stole those accounts were able to use them," Temkin said.

The five most popular passwords in the group were "123456", "password", "welcome" and "ninja", according to an analysis by anti-virus software maker ESET.