Wi-Fi in the sky looks set to take-off 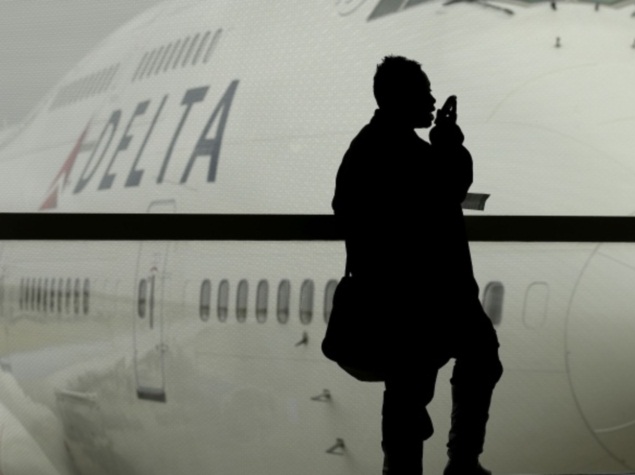 Wi-Fi in aircraft, hobbled in the past by slow speeds, could soon take off as new technology enables passengers to surf the web as if they were in a coffee shop, Internet executives say.

More airlines are rolling out new and improved services thanks to satellite technology, industry leaders said at the recent Singapore Airshow, with the public increasingly demanding Wi-Fi on planes.

Briand Greer, president of Honeywell Aerospace Asia Pacific, said inflight Wi-Fi could generate $2.8 billion for the company alone over the next 20 years.

He estimates that around seven to eight percent of airlines currently offer wireless connection, but says this number is expected to grow to 25 percent by 2018.

After years of being bogged down by weak demand due to poor signal quality, inflight Wi-Fi can now enable download speeds of up to 50 megabits per second, Greer said.

"How we describe it is it will be like you are sitting at Starbucks with your smartphone, your computer and your iPad," Greer told reporters.

Onboard Wi-Fi is not a new idea European carrier Lufthansa debuted Conexxion by Boeing's system in 2004.

But by 2006 the company announced its exit after the expected growth in the market did not materialise.

Recent surveys by Airbus and Honeywell, however, suggest that the market might now be ready as passengers increasingly expect airlines to have inflight wireless services.

Airbus published a report in February about the comfort demands of Asian passengers, carried out by global consultancy Future Laboratory.

One of the future trends highlighted was that Asian business passengers would expect Wi-Fi enabled cabins with telephone and conference calling facilities.

Honeywell also conducted a survey of 3,000 passengers from the United States, Britain and Singapore and nearly 90 percent would give up an amenity, such as drinks or a better seat, for a faster and more consistent wireless connection.

When flying over land, planes use telecommunication towers to transmit Internet signals but during long-haul flights, when they fly over large expanses of water, consistent connectivity becomes a problem.

In those cases, a satellite network is needed.

In December last year, Inmarsat launched the first of three satellites that will serve the GX network. Air China will be the first airline to test it, on its A330 fleet in the second quarter of 2015.

Singapore Airlines, which launched its $50 million inflight connectivity programme in September 2012, said it planned to finish equipping its aircraft with the hardware by 2015.

A Lufthansa spokesman said that it would also begin rolling out inflight Wi-Fi on all of its planes in the middle of this year.

Even no-frills airlines are catching on.

Thai budget airline Nok Air announced during the Singapore Airshow that it will equip its new Boeing 737 fleet with Wi-Fi.

"If you have something that you need to repair, you can get the status check to the ground level so they can be prepared so they can actually do the maintenance quicker," Andersson told AFP.

"You can reduce the turnaround and maintenance (of airplanes) dramatically."

Sashangar Sreetharan, an analyst at McKinsey and Co. who flies twice a week, said that only airlines with Wi-Fi were considered "preferred carriers" for his firm.

But he admitted that although he often worked during flights, the wireless service quality so far has been sub-par.

"The speed is quite slow and every now and then you lose signal, but it isn't too bad. However, once you are on a Virtual Private Network (VPN), the speed is so slow that gateway timeouts occur," Sreetharan told AFP.

Sreetharan said he was not sure everyone would necessarily want Wi-Fi on planes.

"Honestly, if the Wi-Fi was better I'd rather have it. I mean that is because my bosses are reasonable and don't push me while I'm flying," Sreetharan told AFP.

"But if they started harassing me on flights, I guess I would swap to not having it, I don't want to be emailing back and forth during a long flight."