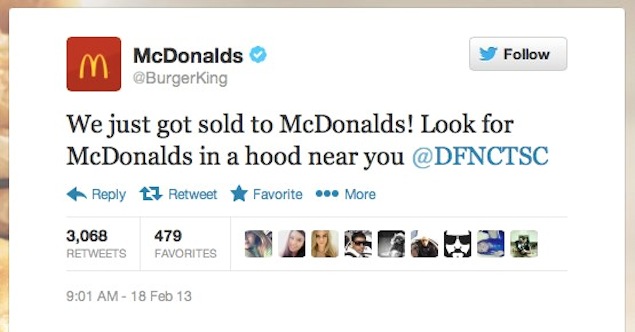 Somebody hacked Burger King's Twitter account on Monday, posting obscene messages and changing its profile picture to a McDonald's logo.

The tweets stopped after a little more than an hour, and Burger King said it had reached out to Twitter to suspend the account. A Twitter spokesman did not immediately respond to a phone message left on Monday.

Late Monday, Burger King tweeted "Interesting day here at BURGER KING, but we're back! Welcome to our new followers. Hope you all stick around!"

Burger King, which usually tweets several times a week, typically does so to promote sales on chicken sandwiches, or to ask questions such as how many bites it takes to eat a chicken nugget.

But just after noon EST on Monday, someone tweeted via Burger King's account, "We just got sold to McDonalds!" They also changed the icon to rival McDonald Corp.'s golden arches and the account's background picture to McDonald's new Fish McBites.

About 55 tweets and retweets followed over the next hour and a quarter, including some that contained racial epithets, references to drug use and obscenities. The account tweeted: "if I catch you at a wendys, we're fightin!"

Monday's appropriation of Burger King's Twitter account was a relatively mild example of cyber-security problems, which are causing increasing concern in Washington and for industry. Media outlets including The New York Times, The Wall Street Journal and The Washington Post have all said this year that their computer systems were breached, while several NBC websites were briefly hacked in November. White House officials and some lawmakers are pursuing legislation that would make it easier for the government and industry to share information on how to defend against hacking.

Burger King didn't know who hacked the account, and no other social media accounts were affected, said Bryson Thornton, a spokesman for Miami-based Burger King Worldwide Inc. Its social media team and an outside agency manage the Twitter account, but Thornton declined to say how many people knew the account's password. He said they hope to have it working again soon, and will post a statement on Facebook later Monday apologizing for the tweets.

Twitter acknowledged on Feb. 1 that cyber attackers may have stolen user names and passwords of 250,000 users. It said at the time that it notified users of the breach.

McDonald's responded on Twitter that it empathized with its Burger King counterparts. "Rest assured, we had nothing to do with the hacking."